Print media is in complete freefall.

Last week, I witnessed what pretty much amounts to a funeral, or a celebration of life for the Daily Breeze.

It was a bittersweet moment for the industry.

Now check out what kind of crime reporting we get in the Daily Breeze:

Hermosa Beach isn't known to be a dangerous or wild city where gunfire goes off on a routine basis.

The article is so lacking in details, especially since the event occurred three days ago.

One would think that the reporter would have gathered enough information besides what was printed:

At about 3:15 p.m. Saturday, March 24, Hermosa Beach police officers were dispatched to the 2700 block of El Oeste Dr. after receiving a report of gunshots heard at the rear of a building, police said in a news release.

A report of gunshots. He identifies the location. 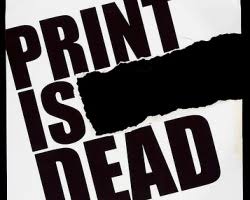 The gunshot victim was later found at a hospital, but it was unclear whether he was transported by authorities. None of the parties to the shooting were present at the scene when officers arrived, the release said.

What is going on here, exactly? How is any of this newsworthy, when there is so little news to begin with?

Details about how many people were involved in the shooting, the number of suspects and the victim were not immediately available.

It's been three days. Still no information? Why publish anything?

Hermosa Beach police investigators are following up on several leads, the release said.

What else did the release "release"? If there was so little information, like the name of the person shot, the other people involved in the shooting, then it would be newsworthy.

With such scant details, why publish this report in the first place?

Is it any surprise that consumers in the South Bay are no longer reading the Daily Breeze or the local press in general? With such little information for factual reporting, and with crass editorializing from the major reporting in other stories, readers have fewer reasons to pick up--let alone pay for--a copy of the Breeze.

The lack of details in the above segment is stunning. Why even waste time printing such a little article in the first place, since it reports so little?

On top of that, the Internet version of the article has a stock photo with a police vehicle and lights shining. Pretty shoddy, I must say.