Orange County may have been trending blue for the last five years, but this week, the ruby red heartbeat of American citizen, California patriots rose to the forefront once again. 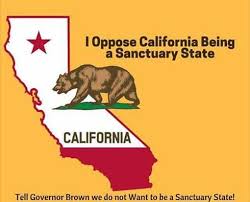 The Orange County Board of Supervisors took the strong, necessary, and welcome step of passing a resolution condemning SB 54, the corrupt, lawless sanctuary state law passed by State Senator Kevin De Leon and company last year. The law came into effect in January, and yet even now law enforcement and local bodies all over the state are standing up to this unconstitutional bullying. They refuse to allow the state government to put county and local law enforcement in an unconscionable bind.

The OC Board of Supervisors is following the lead of Los Alamitos, which passed an ordinance in the middle of March, and they will return on April 16 to finalize the ordinance and ensure that the United States Constitution remains the Supreme law of the land at least in Los Alamitos.

From there, other municipalities are taking on the Sanctuary State law, informing the public that they will reject following the state statute, which is clearly in conflict with the United States Constitution.

Which brings me to Mission Viejo. This is one beautiful city of many in South Orange County. They have a thriving church community in the region. I still remember two very active evangelists and their families in the area. Not only that, but LA County residents fleeing the godless lawlessness moved to Mission Viejo to find a better life.

The high quality of life remains in the area to this day, and the city council demonstrated why. They not only passed am motion to approve a resolution condemning Sanctuary State, but they voted to file an amicus brief with the Department of Justice against the state of California for putting the interests of illegal aliens and their enabling politicians ahead of American citizens. 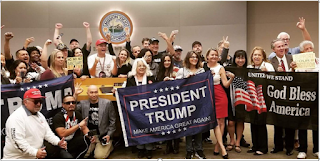 The stunning victory we enjoyed in this city was unprecedented.

The mayor, Ed Sachs, brutally mocked the Brown Supremacist who repeatedly follows us from one city council meeting to another. He called him a "buffoon", and reminded him that only in the United States could he preach his seditious treason against the United States--and get away with it.

I mention Mission Viejo on its own because at this city council meeting, at least 10 residents in the city attending the meeting on their own--without any connection to We the People Rising or LA County for Trump--to voice their support for the resolution and lawsuit and against sanctuary state.

This outcome shows the incredible momentum that the pro-constitution movement has developed and is still building in the state of California. For the past two years, it seemed that only the seasoned and engaged activists were going to all the town halls and the public board meetings. Now average citizens, the normal set which goes to work, enjoys their families, and rests on the weekends--they are coming out in full force to oppose the Democrats in Sacramento and their abject lawlessness.

We are seeing incredible, unprecedented victories in California, and more people who normally don't attend meetings and speak out are now making their voices heard! This is YUGE, proving that the opposition to SB 54 has awakened the people of California.

"The sheep are no longer asleep!"
Posted by Arthur Christopher Schaper at 1:33 PM

Email ThisBlogThis!Share to TwitterShare to FacebookShare to Pinterest
Labels: Americans First, LA County for Trump, Mission Viejo, No Sanctuary State, Orange County Board of Supervisors, rule of law, SB 54, We the People Rising