I filed a formal complaint against the Phoenix Police Department on Monday, March 12, 2018.

I was thrown out of the Orpheum Theater in Phoenix, Arizona. I attended this Bernie-Grijalva-Gallego rally because I wanted to represent for my President, the rule of law, and counter the lies spouted by Grijalva and company in the theater.

It is really disturbing to look at all of these mindless, socialist lemmings in a theater. Some of the people were screaming and yelling like buffoons. Do they really believe that every answer lies in what the government is going to do for them?

The government has no money of its own. They can only fund something by taking from someone else. Raising taxes on "the rich" hasn't worked in California. Going after the plutocrats or the corporations in Venezuela has created abject poverty, anarchy, stagnation, and starvation. Parents are giving up their children because they cannot feed them.

Here's the whole video of me and other Arizona Patriots lining up for the Bernie Sanders event at the Orpheum Theater:

We made it in way early, and we ended up moving around the theater seats. Apparently, the event organizers couldn't get enough people to attend. They had reserved the four front-row seats for volunteers and activists, but then everyone in the audience moved up and took those seats.

I had come in wearing my Trump shirt on backwards, then I put on my MAGA hat.

Why do I come to these events with all of these crazy liberal loonies?

I want to change minds.

I want to confront lies.

I want to hold elected officials accountable when they push a massive set of lies.

I want the public to know what these elected officials are plotting, and the nonsense that they are spouting and believing.

What is really disgusting me about the Democratic Party's latest schemes? They are hosting
public events in private property. Why are they doing this? It gives them full-court press to throw out anyone they want to. Here's the Democratic Party, folks. They have no interest in hearing different points of view. They don't care about who does what to whom. They can reserve the right to throw out whomever they want to.

Where is the freedom of speech here?

Check out Jennifer of Arizona's take on the Democrats' latest schemes:

The double standard is outrageous.

Elected officials hold town halls in private events so they can remove anyone who opposes them. I agree with Jennifer: the citizens of this country need to wake up!

I also think it's time to boycott the Orpheum Theater, too! 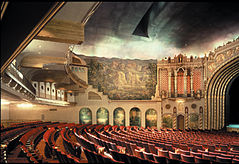 Two days after filing my complaint with the Phoenix Police Department, I received a phone call from Sergeant Murphy. He actually followed up on my complaint and asked for more information.

He shared my frustration about what happened. I outlined to him that not every person who had been trespassed or was ask to leave the building had to turn over their information.

He then basically affirmed my worst fears: the theater proprietors had every right to have me "trespassed", even if I just sat there and did nothing but wear my Trump shirt. Incredible. But that's the reality of trespass laws in Arizona.

I can't believe this is happening in our country. I was really shocked by this. I know that California is left-wing lunatic, but at least they haven't empowered private citizens to just arbitrarily "trespass" people.

Then again, private property is an inviolable right. I don't want that taken away. At any rate, I was not totally happy with this outcome. A few people in our Trump team were shouting out repeatedly, and then all of us were rounded up and forced to leave. I got to suffer through Gallego and Grijalva, but I missed Bernie Sanders. 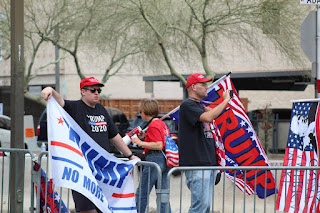 What a bummer. Other people in our Trump movement in Arizona sat in different places in the theater. That was a smart idea, one which I may have to consider in the future. If the Democratic Party was so proud of what they are doing, why do the go to great lengths to shut people out who disagree with them?
Posted by Arthur Christopher Schaper at 12:02 PM