Conor Lamb was not supposed to win the special election in Pennsylvania's 18th Congressional District.

Yet last week, another stirring, stunning, and now very disturbing upset exploded on the scene in the Keystone State.

This development should be shocking every policymaker and political wonk in the GOP.

Look at the final numbers: 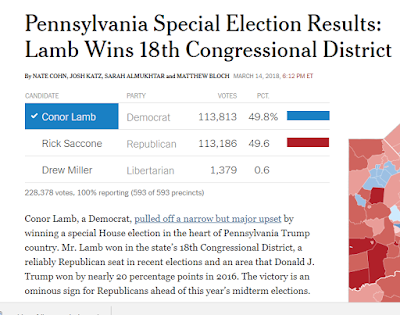 This was a slim margin, even less than Doug Jones' victory over Judge Roy Moore.

Less than half of a percent, yet Conor Lamb won.

He ran as a Republican, essential, assuring that he will not vote for gun control. He advertised himself as pro-life and anti-Pelosi, too.

Trump won this district by double digits, though.

How can this be happening?!

Now, for some perspective ...

Tim Murphy ran unopposed, and yet of course he received a considerable voter tally: 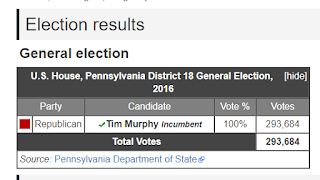 Republicans outspent Conor Lamb by an incredible amount. At least $5 million went into this race.

That's a lot of cash for a special election, and still the Republicans could not retain the seat.

Democrats are mobilized and motivated. They really hate the President. Add to this problem the epic number of Republican incumbents not running for re-election, and we are facing a perfect storm going into November 2018.

This is crazy, but this is happening. There is no running away from the fact.

Even with the tariffs, which are supposed to help Rust Belt country, President Trump's two campaigns in the region didn't help.

Republicans did not turn out and vote!

Sources have indicated, both by word of mouth and in print, that Rick Saccone did not wrong a strong campaign. Pat Buchanan submitted that Saccone stopped talking about the tax reform bill, since the popularity of this legislation still does not resonate with the growing public. I guess that makes sense, especially if you don't have a job.

Working class Americans are getting back to work, but perhaps the economy is jumping into robust growth fast enough. For now, though, the devastating outcome in Pennsylvania comes down to a lukewarm Republican turnout, coupled with an enraged Democratic base ready to stop President Trump at any cost.

Add to that the fact that Conor Lamb pretty much ran as a Republican and worked a whole lot harder, distancing himself from Alzheimer's Nancy. The biggest factor right is an enthusiasm chasm among Republican voters. Former Presidential candidate Rick Santorum has argued that because Republicans have not fulfilled many of the promises they campaigned on, their numbers are hurting, and the base is uninspired.

A large swath of voters are contented enough with Trump, too. Sadly, success can be quite an impediment to ongoing political victory going forward. Perhaps Trump's talk about granting amnesty to three times the number of illegals beyond DACA has startled some of his most ardent supporters too. It would be a real shame for the country to vote for divided government just because.

They love what Trump is doing, but find too many of them not only distancing themselves from the President, but actually frustrating his agenda, which is so, so true. If Republicans don't accomplish key policy goals in the next six months, and Democrats maintain their anti-Trump momentum among the hardened, outraged grassroots, Republicans in the House can look forward to minority status post November 2018.