This guy named "Luke Dennis" according to one source got all up in my face because I was demonstrating in Huntington Beach. LA County for Trump and We the People Rising showed up to raise heaven, so to speak, to counter-protect the DACA illegals and the DREAM Act bus tour out to trounce our immigration laws and put illegals ahead of Americans.

We refuse to accept that. We had a successful morning outside of Dana Rohrabacher's office. Her staffer came out to greet us, too! 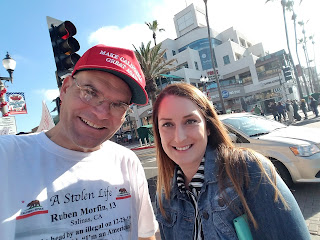 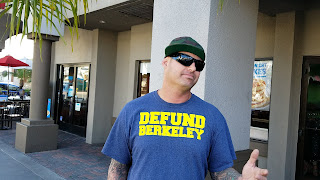 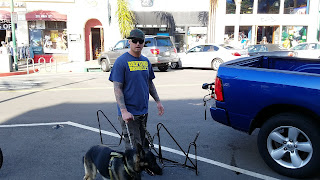 He had his "Defund Berkeley" shirt on, so one would think that he would be on our side.

Yet he started harassing Harim Uzziel, Jesse Suave, and then he started yelling at me when I was walking to my car.

What was the matter with this guy?

At the outset, he told me "Don't come to Huntington Beach."

Excuse me? I can go wherever I want to. Some of these outspoken Trump "supporters" have really lose their way.

Dennis here reminds me of Gay Cuck Spartan. They are not interested in stumping for Trump and fighting for what is right. Their only interest is self-aggrandizement or endorsements.

Pretty shameful, I must say. While he was interested in trying to spark a fight, I just stood my ground and asked him to explain how I am "making us look bad."

Here were some comments left on the YouTube video:

Wow! Some people just need to grow up and take their personal conflicts somewhere else. If anything makes the MAGA movement look bad, it's these Trump "supporters" attacking other Trump supporters in public.

Ralph Wigum
12 hours ago
Arthur speaks the truth!
Stay back, cretin!
LMFAO this sad excuse of a trump supporter has lost his
way.﻿

In other words, a Trump "Supporter" who has gone bad.

What else is going on? Ralph added something else:

Ralph Wigum
12 hours ago
haha, I like the dog too GSD best dog in the world.
This hater wasn't ready for logic.
This guy must have people in his ears wrapping his worldview.
I presume his patriotism is hidden in somewhere deep inside.
He's a phony patriot.
He thought he was edgy with the shirt.
Otherwise, he's phoning it in.
This lost individual has nothing but second-guessing and or attempted undermining of you all standing up and speaking out.


Dismissiveness comes in all shapes and sizes.﻿
Posted by Arthur Christopher Schaper at 2:28 PM