Americans Dreamers Have Become Pawns in the Immigration Debate

Professor Wayne Cornelius claims that the 700,000 DACA recipients are pawns in the immigration debate. He should blame Barack Obama for creating cohort of illegal aliens in this country, shielded by his unconstitutional executive order.

President Trump campaigned on a platform of putting Americans first in federal policy, which includes immigration. Citizens in this country have every right to expect our immigration laws to be respected and followed. 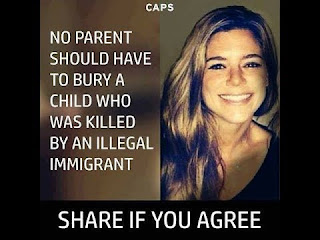 If anyone has been treated like pawns, look no further than the American dreamers, youth who have been pushed out of entry level jobs because of cheap illegal alien labor. Worse yet, how about the Americans young and old who have been killed by illegal aliens, foreign nationals who never should have been in this country in the first place?

The political, media, and academic classes need to pay attention to the needs of our American dreamers. Kate Steinle had dreams, too.
Posted by Arthur Christopher Schaper at 6:04 PM