In a win for the pro-family movement in uber-liberal Marx-achusetts, MassResistance members and speaker Scott Lively wow-ed the Mass GOP crowd during their convention and forced incumbent RINO Governor Charlie Baker into a primary.

Keep in mind, everyone, that you are talking to a life-long Republican who wants Republicans to win. But there is no value in having a Republican in office when they sell out the principles on which they ran for office. Even worse, when an incumbent undermines the foundational principles of our Judeo-Christian culture, he hurts everyone.

I really admire that MassResistance is fighting the culture wars and doesn't spare their outrage for either party. Elected officials must work for the best interests of the people whom they serve. That has not been happening in Marxachusetts for the last thirty plus years, and it's time to Make Massachusetts Great Again.

That includes forcing the governor to respect natural law and natural rights, which Baker threw away to make nice with the liberal loonies running Beacon Hill--and who cares if he dressed down the Corner Office!

Go Scott Lively Go! Check out the report from MassResistance:

Also at convention: Huge pro-family wins in other major races. 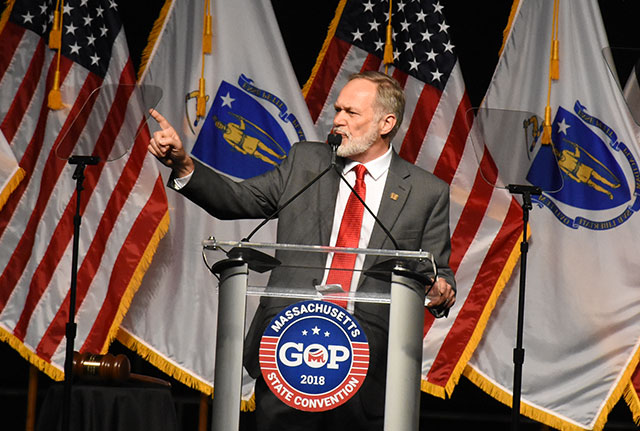 Scott Lively during his speech before the Mass. GOP State Convention. It was a barn-burner! [All photos and video by MassResistance.]
In what can be considered the greatest Massachusetts pro-family victory in many years, Pastor Scott Lively shocked the GOP establishment (and the liberal media) at the Massachusetts State Republican Convention of the 2,300 delegates, held on April 28 at the DCU Center in Worcester. Lively clinched an official nomination for governor by receiving 28% of the convention vote against the current GOP governor, Charlie Baker, who is running for re-election. Lively will now run in a primary against Baker on Sept. 4. He accomplished this despite a massive effort by the GOP establishment to keep him from getting on the ballot. His speech before the convention (see video below) was a barn-burner that went right at the Governor. 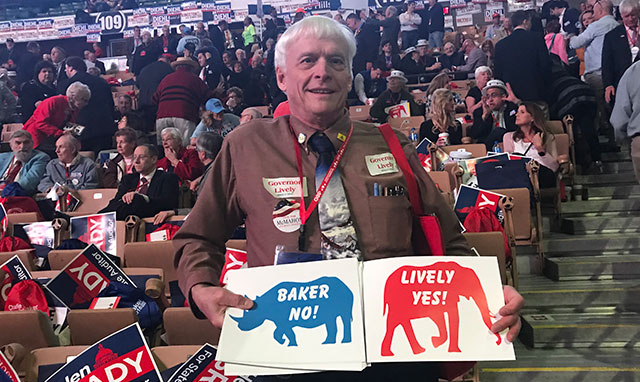 Lively's supporters made themselves very visible. 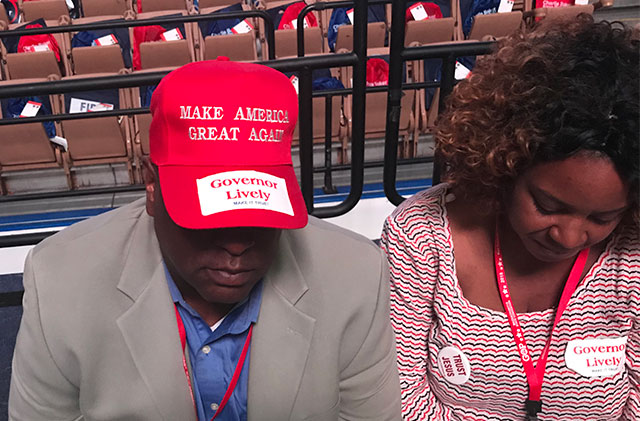 A lot of Lively supporters also word "Make America Great Again" hats to show their support for President Trump -- whom Baker distances himself from -- along with "Governor Lively" stickers.

A terrible RINO as Mass. Governor

Over the last four years, Governor Charlie Baker has become beloved in the liberal press, but has been a nightmare for the GOP conservatives. Baker is enthusiastically pro-abortion, pro-LGBT, anti-Trump, and brags about “working across the aisle” with the Left.
Just of a few of Baker’s outrages:
All the while, Baker has been openly hostile to conservatives while friendly to liberals of all stripes.

Lively jumps into the race

Many remember that Scott Lively also ran for Governor four years ago as an Independent. He received only about 1% of the vote. But he got his feet wet, participated in some candidate debates, and a lot of people got to know him.
Back in December, Scott Lively announced that he would run against the Charlie Baker – this time as a Republican. Massachusetts needs conservative principles, and the Massachusetts GOP needs to be sent a strong message, said Lively. (See the website.) He was quickly welcomed by Republican activists across the state.
But getting on the Republican ballot is not easy. Besides getting the state-mandated 10,000 signatures, a Republican candidate for statewide office must also get at least 15% of the votes of delegates at the annual GOP convention. Many have failed at that. The GOP establishment is known for using sleazy tactics to keep conservatives off. Four years ago Mark Fisher barely squeaked by after the establishment tried to cheat him out of votes, but MassResistance videoed the count proving he actually made it. (Our video ended up costing the GOP $240,000 to settle Fisher’s subsequent lawsuit over it.)

Both the Baker campaign and the Mass. GOP establishment wanted the Governor to avoid having a primary opponent, especially someone as articulate as Lively. But they also knew there is great dissatisfaction and anger at Baker from conservatives.
So the Baker campaign embarked on a large, expensive campaign to persuade delegates to vote for him – or at least reject Lively by simply “blanking out” the ballot. Mailings, phone calls, personal pressure, etc. – including a vicious under-the-radar effort to discredit and demonize Lively personally. It lasted right up until the vote at the convention. We have rarely seen anything like it. More details on that coming up. 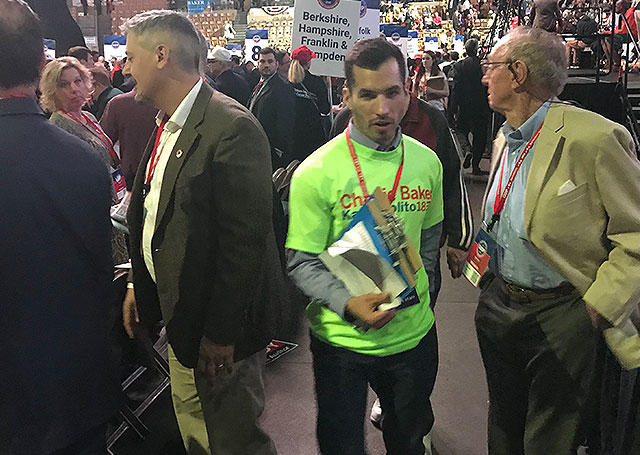 The Baker campaign had dozens of campaign workers in green shirts (with "18" on the back) with clipboards, to buttonhole delegates they believed were voting for LIvely.

A barn-burner speech by Lively

When it came to giving their convention speeches, the Governor spoke first. It was a fairly standard (and boring) stump speech, re-tooled a bit for the more conservative crowd. He talked about what he considered his accomplishments over the last four years and how he differed from the Democrats who control the state. He claimed credit for the economic turn-around. He never referred to Lively, either directly or indirectly.

Lively's banner that hung over the convention hall proceedings.
Then Scott Lively spoke. He was on fire (being a pastor helps with that)! He held nothing back. He lit right into the Governor. He talked about the terrible failings of the current administration and its liberal direction. When Lively talked about his support for President Trump he got loud cheers from the audience. He talked about his conservative vision for Massachusetts compared to the RINO-like GOP establishment. As his banner at the convention says, Lively is "Pro-Life, Pro-Gun, Pro-Business, and Pro-Trump." He exhorted his supporters not to “blank out” their ballots, but to vote boldly!
VIDEO of Scott Lively speech before Mass. GOP Convention
NOTE: We are fixing the flicker problems. New version being uploaded! 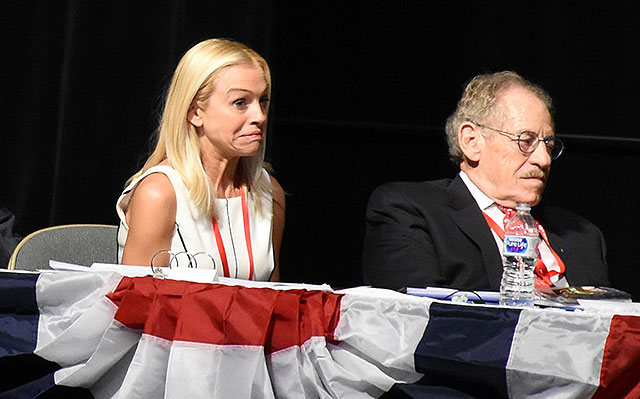 But most of the delegates seemed seemed spellbound as Lively's tore apart the GOP establishment and talked about conservative values.
When the votes were counted – this time electronically, by an outside firm – Scott Lively shocked the Baker people and the establishment by getting nearly 28% of the delegates’ votes. They were visibly stunned. 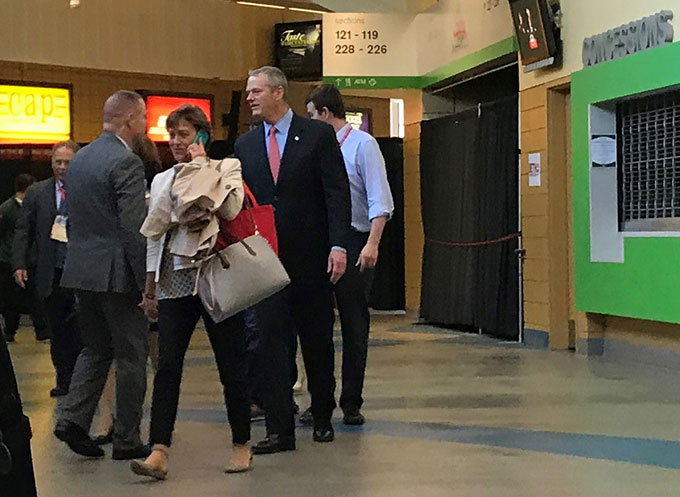 Almost immediately after the vote, Gov. Baker (second from right) exited through a back door of the DCU Center.


The other major pro-family victories at the convention!

According to the GOP Convention rules, the candidate who gets more than 50% of the delegate votes becomes the official “endorsed” candidate for that office in the primary. That can be important! If there are several candidates who get at least 15% but no one breaks 50%, they keep voting until someone gets over 50%.
Besides the Governor’s race, there were two offices where there were multiple candidates: Attorney General (to run against incumbent Democrat Maura Healey) and United States Senator (to run against incumbent Democrat Elizabeth Warren).
The anti-establishment wave was definitely felt:
For the Attorney General primary, Jay McMahon, a strong pro-family, pro-Second Amendment candidate won the endorsement, against Dan Shores. Jay is the real thing!
For the U.S. Senate primary, Geoff Diehl won the endorsement (after multiple floor votes) against John Kingston, an anti-Trump millionaire businessman, and Beth Lindstrom, a RINO from the Romney administration who was the favorite of the establishment. Geoff is currently a State Rep and one of the few who doesn’t sell out his conservative principles to the GOP leadership. He co-chaired the Trump-for-President campaign in 2016.

MassResistance table at the convention!

This year MassResistance had a table at the GOP convention. And we didn’t hold back, either. Of course, we were prominently selling our book, The Health Hazards of Homosexuality.But to reinforce the point, we were also selling our bare-knuckled “culture war” stickers. 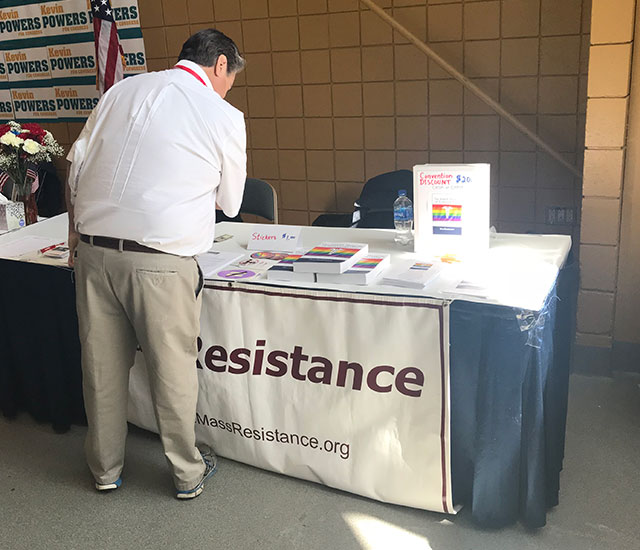 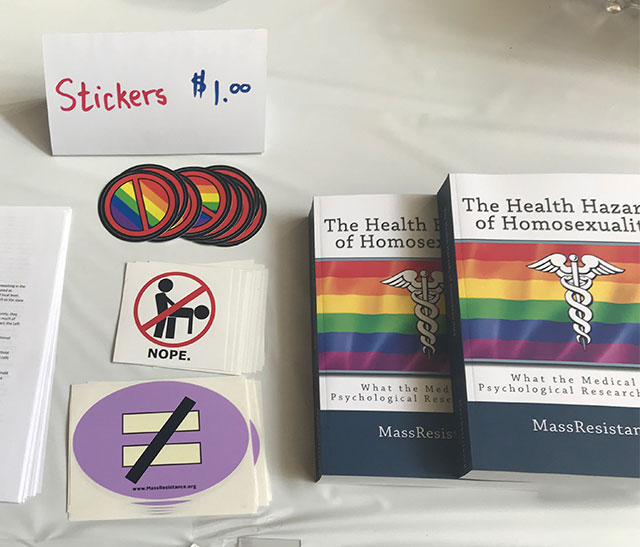 Our stickers (and book) were quite popular!
We didn’t anticipate was that our stickers would be quite popular, particularly with the younger crowd! Even some employees of the DCU Center bought some. We get the distinct feeling that people are tired of mealy-mouthed pro-family groups – and are looking for real culture-war fighters! 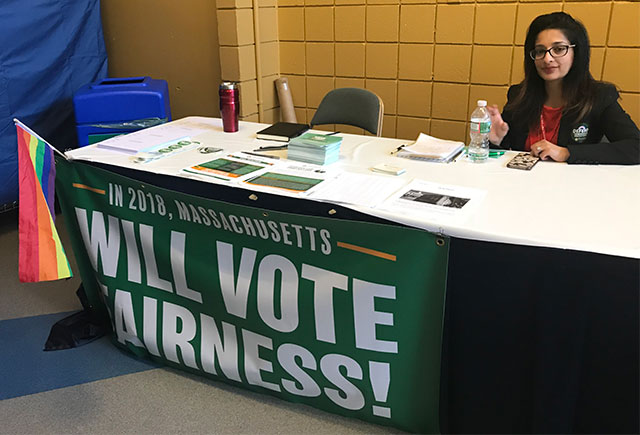 What would a GOP convention be without an LGBT table? This one was opposing the upcoming Mass. ballot question to repeal the "bathroom bill" that Gov. Charlie Baker signed into law last year.

For Scott Lively to get on the primary ballot against a sitting Governor – and getting over a quarter of the GOP convention delegates’ votes – is the Republican establishment’s worst nightmare. Dr. Lively is intelligent, articulate, knowledgeable on all the issues, a powerful speaker, and rock solid on everything pro-family and conservative. We’re not holding our breath for the Governor to agree to debate Lively in the primary.
Plus, Scott Lively doesn’t bend. That’s why the grassroots delegates like him – and why the liberals and RINOS hate him so much. They are often very hostile to what Lively has said or written, but when challenged they ultimately can’t claim that he’s factually incorrect.
Scott Lively is not simply “working the system,” but is taking the fight directly to our opponents. This is what should be happening across America (and beyond). The time for fearful, mealy-mouthed conservatives is over. We believe that Scott Lively represents a winning culture-war strategy. This will be an interesting summer in Massachusetts! 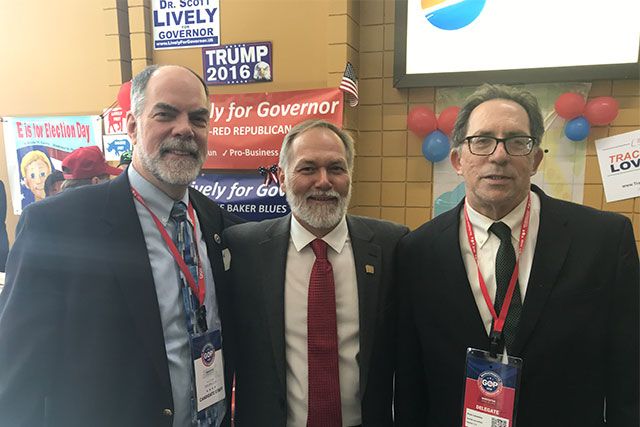 _______________________
Please help us continue to do our uncompromising work!
Donate to MassResistance
Your support will make the difference!
Posted by Arthur Christopher Schaper at 2:10 PM