Jennifer Rubin is Not Just a RINO, But a Full-On Liberal Shill

This tweet says it all about the corrupt, decrepit state of the mainstream, corporate media:

For those who do not know, Jennifer is the token "conservative" or "Republican" columnist who is supposed to give Washington Post the appearance of being fair and balanced to both sides of the political spectrum.

Jennifer Rubin is a Never Trumper snob who has no business passing herself off as some kind of Republican guru or expert. Her arrogant refusal to support President Trump and recognize the great work that he has done for conservatism is a full-on shame. 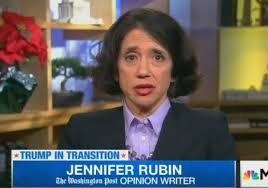 Talk about false advertising. The articles above were written within three years of each other. The first one, she rightly slams the corrupt, abortive, false Iran deal. But when President Trump terminated the crappy deal, she criticizes him and his efforts.

This woman is beyond useless. This kind of tasteless flip-flopping for narrow-minded political reasons, specifically a petty disdain for President Trump, spells out precisely why the mainstream media is in complete, irrevocable freefall.

I say that every should throw the Washington Post into the Compost and not look back, and let's let Jennifer Rubin's articles lead the way.
Posted by Arthur Christopher Schaper at 5:18 PM