They are wonderful people, and they refuse to be bullied and to be silenced.

Lisa, a strong woman and mother, declared to all of us and to the news cameras that she refuses to be afraid. 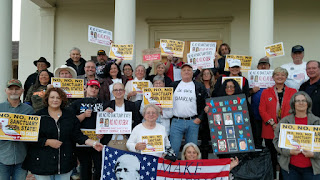 Dawn Jones spoke out as well, and she told the Monterey County Board of Supervisors that she does not feel safe in her own city!

I posted a few reports about the successful Monterey County contingent that took on the Board of Supervisors and then the Monterey City Council.

Check out this comment from the Central Coast Tea Party Minutemen!

Central Coast Tea Party Minutemen has left a new comment on your post "Update from Monterey County with Monterey County A...":
What a world wind of accomplishments in one day. News Coverage of the fight against SB54. Felix on KSBW thinks it’s just toasty that the Monterey County BOS decided to declare Monterey County officially a “Welcoming” county and plans to write an amicus brief in support of SB54. They were FORCED to get on record by these Constitution loving patriots and with your with your surpurb media skills....all ONE DAY before President Trump met with CA elected officials who are fighting against SB54. Thanks again Arthur. We appreciate all you helped accomplish here in beautiful Monterey County. https://m.youtube.com/watch?v=NLodxrwf_-o&feature=share 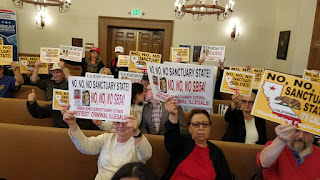 Posted by Arthur Christopher Schaper at 9:56 AM