Costa Mesa: YUGE Victory for We the People vs. Sanctuary State

May 1, 2018 didn't look like a sure victory for LA County for Trump and We the People Rising speaking out against SB 54.

The city council had tried to voice official opposition to SB 54 when the legislation was still going through the state legislature in Sacramento. The motion to oppose failed by 2-3. Sad, but true, and the majority of the city council is Republican!

We had no idea what to expect going into the city council meeting that night. The Costa Mesa Police were ready in full force. As you can expect, we patriots and pro-rule of law activists are such a threat to the established order (as if!).

The police insisted that we line up one at a time to enter the city council chambers. I showed up with two of my fellow Trump supporters Kira Innis and Harim Uzziel--to the fullest with a passion!

Trump supporters from all over Southern California arrived in Costa Mesa, and we pretty much had the run of the place. A number of Costa Mesa residents did show up, along with the usual crowd of pro-SB 54 forces. The local media and left-wing activists have referred to us as clowns and a "hate circus", yet the active and abuse Indivisible Groups bring hate to a whole new level. The Vice-Chair of the Orange County Democratic Party called a Vietnamese-American a "traitor" just for having a difference of opinion on whom should be President of the United States. He flipped me off, too.

Other college-age protesters--many of whom do not live in the cities where they fight to support SB 54--have been very rude to the public, to city councilmembers, and even to the police officers. In Westminster, it was appalling to see the protesters of Asian descent shaming and diminishing Mayor Tri Ta and his colleague Tyler Diep. Do they not have a right to fight for their country, regardless of their national origin and ethnic background?

Guess who was there to support the rule of law and take a stand against this lawless, unconstitutional sanctuary state policy? 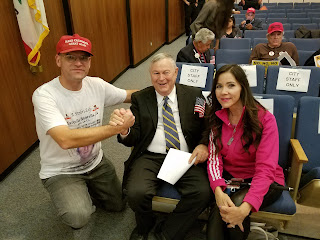 Congressman Dana Rohrabacher is one of very few politicians whom I find fundamentally trustworthy. I rarely say that, since most politicos are more interested in getting votes than making a difference.

It was good to see Dana there to support our widespread efforts to stop Sanctuary State and put the safety of Americans and sovereignty of America first.

Here are fellow Trump supporters, including Elsa Aldeguer of Latinos for Trump: 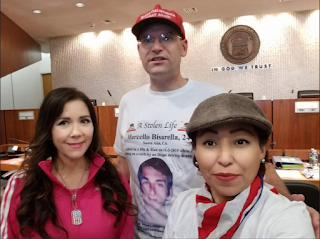 Costa Mesa was a tight ship for the rest of the evening. 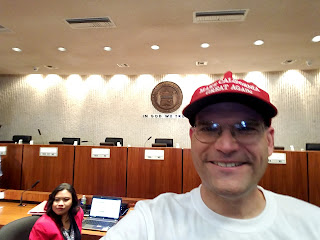 The city council agenda was pretty light, but the two sides of the chambers were clearly divided. We the People sat on the right, while the open-border proponents sat on the left (how apropos!).

I had received a text message from MoveOn.org, which has become a very active contingent in Southern California, since they left is targeting Orange County like crazy for Election 2018. I was surprised that there weren't that many people there, although a large number of Costa Mesa residents did turn out to oppose or support SB 54.

The most hostile member of the city council, Katrina Foley, doggedly interrupted speakers from the dais, including Congressman Rohrabacher, who lives in Costa Mesa. Their lack of knowledge of the Ralph M. Brown Act was pretty stunning. Clearly, Democratic elected officials are doing everything they can to stop the anti-SB54 movement across the state.

But they are failing.

Here's the whole video I recorded live at the city council meeting:

Check out We the People showing our opposition to Sanctuary State: 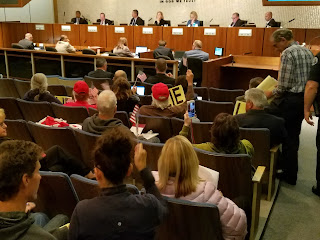 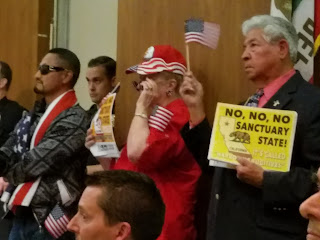 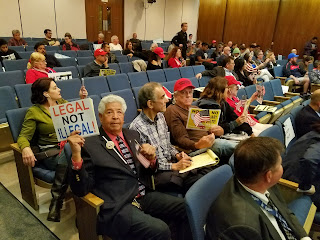 Police did escort out a few of our members, but they were allowed back in: 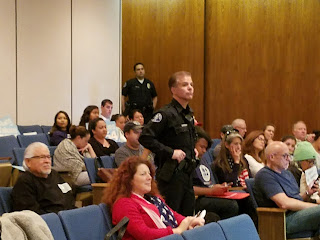 The police in Costa Mesa were incredibly high maintenance. Mayor Sandra Genis demanded order repeatedly, and slammed her gavel a number of times when loud applause or boos followed different remarks from the audience. She seemed partial to slamming Trump supporters, but the police on site also addressed concerns with the left-wing demonstrators in the audience, too.

By the way, members of the different protests on both sides have found some common ground. We have found ways to be civil to each other--at least for those who are willing to talk to us: 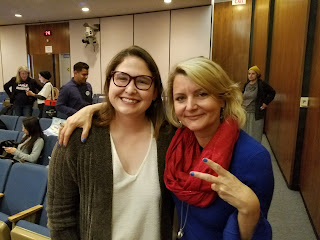 Skye Wagner supports SB 54, but she is willing to talk with us who oppose it. Her husband struggled to obtain legal status as an immigrant from Germany. I would never dispute that the immigration process has bureaucratic flaws, but we must stop the non-stop flow of illegals and third-world migrants into our country and our state.

I wish that more people on her side would discuss the issues rather than shaming and dismissing opponents of illegal immigration and amnesty as bigots, racists, xenophobes, and white supremacists. It's truly shameful, but at least the race card has gotten played out so badly that fewer people are intimidated or bothered by it.

Some of the highlights of the meeting:

Sparks flew between the councilmembers on the dais. Allen Mansoor, who had served in the state assembly for two terms, then ran for Board of Supervisors, brought forward the resolution, then shared that he wanted the city to file an amicus brief with the Department of Justice of with the city of Huntington Beach.

Mansoor informed the public that when he brought an ICE agent into the Costa Mesa jail, the city ended up apprehending and processing 1,300 illegal aliens. That's an incredibly high number. Councilwoman Foley and Genis talked about the sober living homes that are overwhelming the city as well as the entire county. Most people in the state and throughout the country do not know about the Sober Living home crisis that has overwhelmed Southern California, but the issues with parking, loitering, drug use, littering, and the general civic decline in the city have overrun the once quaint and beautiful city.

Crime is rampant in the city, too, especially because of transients stealing property and disturbing the peace. Needle use from drug users has littered the city public areas inexorably. Parks are becoming less safe, too. I was astounded

Councilman Stephens asked some pointed questions about ICE Detainers and pointed out to the public that the city of Costa Mesa had stopped honoring those detainers in 2014. Yes, a federal court ruling in Oregon had struck down the initial detainers, but then ICE revised the detainers to make them compliant with the Fourth Amendment. The ACLU never bothered to inform city councils that they are now constitutional, of course.

Councilman Righeimer asked why the city council had not been informed about the ACLU letter until that day. Wow, that is disturbing!

Members of the audience spent a lot of time shaming and lying about Councilman Mansoor, claiming that he had violated the residency requirements for city councilmembers. That was a cheap, flimsy attempt to discredit the councilman's efforts to fight illegal immigration. It was a pretty low blow, and other members of the city council didn't care. The pro-open border people also slammed Councilman Righeimer, talking about his connections with Congressman Dana Rohrabacher and Scott Baugh.

A number of candidates for the 48th Congressional District were in the audience, both Democrat and Republican working hard for the vote on June 5th. During public comment before the public hearing on SB 54, a bunch of the left-wing activists slammed the Republicans in Orange County and the candidates running for office because they were using the SB 54 discussion to prop up their campaigns.

What hypocrisy. The Indivisible and La Raza activists have been doing the same thing for the last year and a half, too.

Before public comment, Councilwoman Foley requested that every speaker at the podium identify which city they lived in. That is a clear violation of the Ralph M. Brown Act, and many of us in the audience reminded of her of these abusive attempts to mar our First Amendment Rights. The police tried to maintain order, and a few times he directly instructed people on both sides to watch what they said. Still, it was quite alarming for Councilwoman Foley to behave in such a rude and illegal fashion.

There were a number of Costa Mesa residents who spoke in favor of SB 54 and requested the city council to simply receive and file the resolution. Toward the end of the public hearing, Robin Hvidston and I wondered if the mayor or Councilman Stephens would change their minds from the previous vote and go along with the resolution.

During my public comment, I reminded the council that the ICE Detainers had changed so that they were compliant with the Fourth Amendment. Wearing a picture of Marcello Bisarello, I informed the dais that illegal immigration has a real toll, and there is a human face to the immense suffering and crime to the invasion along our southern borders. I clashed briefly with Mayor Genis because I insisted that she look at my shirt. With no ill will toward her or anyone else, I just wanted to make it clear to the audience that the human costs of illegal immigration cannot be ignored.

My other talking point focused on the flimsy argument that resolutions are symbolic, and therefore utterly meaningless. That is not true, especially since such vocal opposition arrived from within and outside of the city to stop the resolution. I wanted the city to go to the fullest extent possible to opt out of SB 54, but anything was better than nothing in my view.

Here's the final hour of the city council meeting:

Councilman Stephens hid behind legal mumbo jumbo to justify his silence. He even admitted on camera that he was more interested in fostering a nice relationship with elected officials at the state and federal level. Unbelievable. He has no interest in championing the interests of the city and individual liberties. Local control obviously means nothing to him, too.

It irritates me to no end that elected officials want to punt on the United States Constitution and the constitutionality of the rule of law. Every individual has the right and simple authority to declare and affirm what is and is not in compliance with the United States Constitution. Elected officials have no right to hide behind "Let the courts decide." That's becoming a large part of the problem in the American legal culture.

Katrina Foley vilely smeared the members of the audience in opposition to SB 54. She even shamed the mayor, who wanted to get past the "Racist vs. Pro-Criminal" divide which had emerged in the debate over SB 54. Mayor Genis approach was understandable, and she pointed out the biggest problem with SB 54: the legislation allows illegal alien criminals back onto Costa Mesa streets instead of turning them over to ICE for deportation.

Yes, SB 54 does directly affect every city, including Costa Mesa.

Councilman Jim Righeimer talked openly about his political views and affiliation. He mentioned that he was not an ardent Trump supporter, but voted for him and affirmed his commitment to the vote, because everything that Trump talked about was RIGHT!

It looked really close. I had anticipated another 2-3 loss.

But the Mayor stood her ground and sided with the Sheriff of Orange County and voted for the resolution! It was pretty sickening and aggravating to see the other two city council members--Foley and Stephens--attempt to sway her vote, but they failed.

It was a surprising victory, and we are all happy for it. 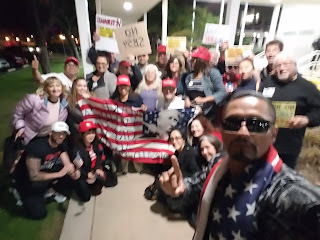 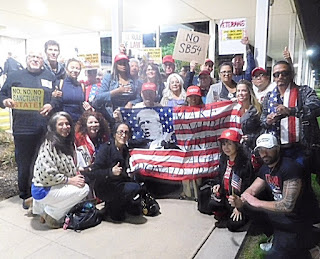