What Has Sexual-Orientation Non-Discrimination Wrought?

The entire hotel is converted into a pleasure dome, with all sorts of kinky happenings, over the course of the weekend.  The lobby becomes a buzzing, high-end leather bar, with the mild scent of rubber and rawhide lingering in the air. The ballrooms turn into dance parties, and the hallways are converted into cruising grounds.  The whole building transforms into something resembling a bathhouse (but with nicer carpets and lighting)…  A room at the hotel costs much more than the typical bathhouse, but that was the biggest difference between the two.

“Gay” bathhouses are infamously linked to the spread of AIDS and other diseases, but about 70 continue to operate in many cities in the U.S. Now, some upscale hotels are (at least temporarily) turning into bathhouses. Where are the CDC and local health departments when we need them?
BDSM-affirming research admits that BDSM participants have a high rate of mental disorders (25% have attempted suicide; about 40% suffer from anxiety and depression), twice the incidence of Hepatitis C, and ten times the incidence of HIV/AIDS as the general population.
In other words, major corporations are knowingly allowing their hotels to become public health hazards – both for the event participants, and the innocent guests who follow. These hotels will never be clean again. Traveler beware!
How have we arrived at this low point?
Ever since homosexuality was declassified as a mental disorder by the American Psychiatric Association (in 1973) – for political, not scientific, reasons – open depravity has been growing like a malignant tumor.
Then came state and local laws, plus corporate policies, demanding “non-discrimination on the basis of sexual orientation” – a term undefined in the law. Applied to public accommodations (such as hotels), these laws result in the defilement of public places affecting all of us.
While sexual orientation is referenced in laws, it’s intentionally left undefined. Sometimes, a specific perversion not to be protected (such as pedophilia) will be singled out in a statute, but what exactly sexual orientation does include is not spelled out.
Ryan Anderson at the Heritage Foundation notes:

SOGI [sexual orientation/gender identity] laws could … have serious unintended consequences.  These laws tend to be vague and overly broad, lacking clear definitions of what discrimination on the basis of “sexual orientation” and “gender identity” mean and what conduct can and cannot be penalized.  These laws would impose ruinous liability on innocent citizens for alleged “discrimination” based on subjective and unverifiable identities, not on objective traits…  Under SOGI laws, acting on … [religious or moral] beliefs in a commercial or educational context could be actionable discrimination.

The Supreme Court recently gave the BDSM community a huge green light in the 2013 ruling, Lawrence v. Texas. Sodomy and related perversions conducted in private were no longer to be considered criminal (though still not declared a “fundamental right”).
Justice Scalia noted that ruling was “a massive disruption of the current social order.”  Homosexual sodomy (and its variations) is not a fundamental right because it is not “deeply rooted in this Nation’s history and tradition.”  Scalia declared, “there is no right to ‘liberty’ under the Due Process Clause.”
Yet in the current legal environment, SOGI anti-discrimination laws are used to protect sodomy in all settings, not just private homes.
But where is the legal definition (or ruling) requiring these filthy sadomasochistic practices be protected under the umbrella of sexual orientation?
The pro-LGBT Williams Institute at UCLA School of Law quotes as authoritative the definition of sexual orientation from the Yogyakarta international law conference (2006):

Sexual orientation is understood to refer to each person’s capacity for profound emotional, affectional and sexual attraction to, and intimate and sexual relations with, individuals of a different gender or the same gender or more than one gender. 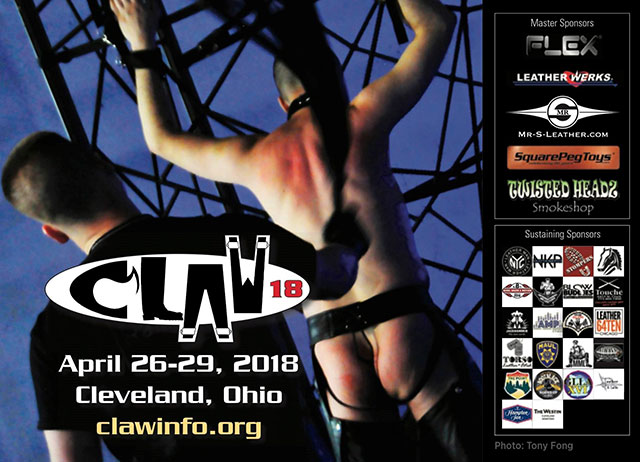 Online advertisement for the CLAW event. Note actual bloody lashing.
The fact that CLAW funds youth groups, GLSEN, and PFLAG shows that these people are grooming our youth. This is not hyperbole.  In May 2009, the Massachusetts Commission on LGBTQ Youth (an official government agency) held its annual “Youth Pride” parade and fair. Ending the day was a queer prom at Boston City Hall where teens were greeted as they entered by “Mr. Boston Leather” handing out his “business” card (with information leading them to leather groups).  Too many young men especially are being seduced by social acceptance of this depravity.
The corporations allowing these events – Marriott, Hilton, and other hotel chains – ought to be ashamed.  They are allowing their properties to be polluted while keeping this fact from the public.
The slippery slope is real. It is time to overturn SOGI non-discrimination laws.
Amy Contrada is the author of Mitt Romney's Deception (2011) and various MassResistance reports.  She has degrees from Tufts and Brown, plus a diploma in violin making.  See AmyContrada.com for more of her work.

_______________________
Please help us continue to do our uncompromising work!
Donate to MassResistance
Your support will make the difference!
Posted by Arthur Christopher Schaper at 12:40 PM