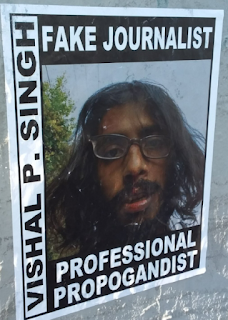 Transgenderism is a mental illness. Anyone who thinks that they can change their sex like flipping a switch is not in touch with reality. Anyone with half a brain knows this already.
And yet, there are some who persist in celebrating this lie as if there is nothing wrong with it. It's almost as though they still need proof that so-called transgenders, in reality self-loathing cross-dressers or gender dysphorics, are mentally ill.
And our favorite Antifa Trans Soyboy fake journalist just confirmed all of this for us:

As far as having a job, well, Vishy doesn't really have a job. He just pretends to be a journalist all while doxxing people and putting people in danger. It's so unethical, and he is so out of step with journalistic standards, that he was disinvited from a form of Asian-Pacific Islander journalists.

Vishal is actually proud that he sees a therapist:

Therapy is awesome and anyone who tries to stigmatize it can fuck all the way off! 💚

This guy seriously has issues. Of course, the high point of his day is smoking dope with his cat, so what can one say beyond that?

there are real-ass people walking around this city putting up defamatory posters about me while I sit on my couch and get stoned with my cat.

some people have weird priorities, man.