The McCainiacs Panic as MAGA Candidates Win Big in Arizona 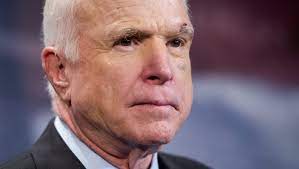 Trump-backed candidates won big across the country yesteday. The GOP Establishment, the Swamp, the Big Business-Big Government RINOs were hoping to stop the Trump train triumphing throughout the USA.

Nowhere was Trump's endorsement prowess more on display than in Arizona.

Blake Masters stomped on the GOP competition in his bid to challenge Democrat incumbent Mark Kelly. It wasn't even close, and his challengers included Mark Brnovich, the feckless Attorney General who refused to defend the "No Promo Homo" legislation in the school district's and refused to prosecute rampant voter fraud and other election irregularities.

Gov. Ducey and his political establishment were angling for a whole array of already-elected candidates to move into statewide office. They all crashed and burned.

Their biggest defeat is the rising star of former news anchor and star MAGA candidate for governor Kari Lake.

Election Wizard made the protection as of this afternoon:

Meghan McCain was none too thrilled with Lake's ascent into the general election, and Lake gleefully rubber her victory in baby McCain's face:

This ain't your daddy's Arizona.

The state belongs to the people now.

And they chose @KariLake to move Arizona forward. https://t.co/QDB0szHCPX pic.twitter.com/s0yWmqO4Sn

Meghan McCain is a RINO sellout who sold her presence and name so she could make some money while being repeatedly humiliated and vilified on The View with the other liberal Karens. She is part of the long dynasty of McCain politicos, with Daddy McCain, who have pushed for Big Military, Big Government, Big Amnesty conservatism for the last twenty years.
This kind of country club Republicanism turned off voters in 2012, men and women in rural and working-class districts who had been abandoned by the perennial bipartisan uniparty political class. Trump disrupted the easy gravy train for establishment politicians and their consultant cohorts.
Kari Lake continues that legacy.
I suspect that the only reason we have witnessed upset Democratic victories in Arizons, first in the two US Senate races and then in the 2020 Presidential election, is that the McCainiacs refuse to go along with the new direction of the Arizona and the National Republican Parties. The best way for them to maintain business-as-usual corruption was to help elect Democrats to federal office. McCain's successors in the Grand Canyon State have no problem maintaining onto what little power they have in Maricopa County or in other precinct committees throughout the state. They have no problem depriving the conservative insurgencies in the state party with loss after loss, as long as those defeats discourage America First conservatives in the short term and allow McCain's acolytes to take back control of the state party and the local offices.
It's really disgusting, how politicians within the GOP have no qualms about screwing over their own party, their base, and the constituents at large because they are sore losers in the shadow of Trump's growing election and policy victories through election 2022.
The latest slate of primary winners in Arizona has really put the McCainiacs into a panic, and they deserve it!
Posted by Arthur Christopher Schaper at 4:56 PM