It has been two months since the Torrance City Council elections, and already the governance on the dias has improved tremendously. A sense of peace is already becoming more pervasive on the council.
The new and incumbent members of the council are treating one another with respect, an element of peace and and calm which has been missing for far too long in Torrance City Council meetings.
Now I have the time to take a longer look at one last flyer that went out to voters just before June 7, 2022.
Cliff Numark, the El Camino College Board Trustee who was leaving one political office to seek yet another, when he had abandoned his second term on the city council ten years ago, sent out multiple flyers. Clearly, he had the money and the connections to blanket the entire city to support him. Even residents in the Harbor Gateway received mailers from Cliff Numark's campaign, even though they could not vote for him!
In the last flyer that Cliff Numark sent out to prospective voters, he went on the attack against Councilman George Chen.
Check out the cover of the flyer here: 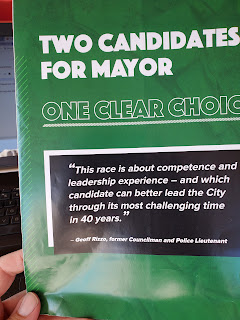 Right away, Numark relied on the word of retired lieutenant and former city councilman Geoff Rizzo. What was significant about Rizzo's comments? Mayor Chen had defeated Rizzo in 2020 in his bid for re-election. This was no small feat, considering that Rizzo, as retired law enforcement, had the support for the police officers association, plus the fact that he had already been elected twice before at large in the city.
George Chen put up a diligent fight and did not relent in getting the word out to the voters in District 2, since by 2020, the city had moved to district elections. One can imagine that Rizzo felt pretty bitter about losing his race to a relative outside who had only been elected the first time in 2018. Then again, the fact that Rizzo fared so poorly suggests that a) he was not a good campaigner b) he was not well-received as a good councilman c) he was too confident in his position as a twice-elected incumbent and did not put in the requisite effort needed.
Numark went on the attack, and judging by the list of criticisms below, Numark had to scrape the bottom of the barrel, and even then there was not much to fault then-Councilman Chen: 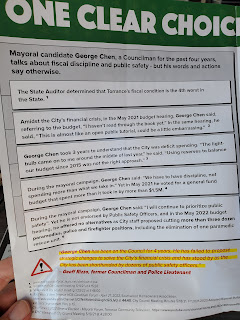 Let's take a look at some of the things that Numark posted: 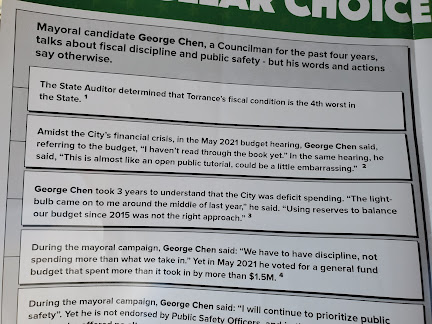 Numark claimed outright that George Chen was all talk and no walk when it came to fiscal discipline and public safety. The first charge challenging this assertion? The fact that the city was in the 4th Worst financial condition in the state. However, that report was issued by January, and by June, the city council had taken drastic steps to shrink government and cut spending. The budget was on track to havea $36 million budget by June 30th, important facts which Numark's campaign conveniently left out.
Numark then selectively quoted Chen froma 2021 budget meeting. By then, Mayor Chen had been serving for three years on the city council. Just because he sahred that he was getting an "open public tutorial" does not mean that he was incompetent. Frankly, I found this level of criticism rather petty and meaningless, almost in a "Mean Girls" sort of fashion.
What's worse, Numark makes it seem as thought Chen had said "The lightbulb came on to me around the middle of last year" and then "Using reerves to balance our budget since 2015 was not the right approach" at the same time. That is not true, and let's not forget that at the time, Chen had voted against the excessive spending conducted by the council.
If Chen voted for a budget that took in $1.5 million more one time, that does not make him a profligate councilman by any stretch. One has to wonder how many times former councilman Cliff Numark voted for Torrance city budgets which spent more than the city had taken in ...
Then consider this latest slight on the same page: 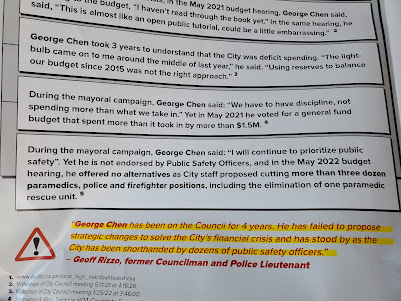 The last box on the list above claims that Chen cut staff from the public safety budget. Nothing could be further from the truth. What happened was that the city council voted not to fill a number of positions. No one was fired, and no one was cut loose. Jean Adelsman used the same deceptive attack ad against Councilman Aurelio Mattucci, and she also failed in her bid to replace him on the city council.
Of course, Rizzo's complaint that Mayor Chen offered no strategic changes to fix the city's budget and fiscal problems was a lie, too. Earlier this year, Chen discussed potential revenue sources with the city manager, and he concurred that some of Chen's ideas would be very good for the city.
Just two pages into Numark's flyer, and there is nothing but distortions, errors, misquotes, and lies. To call this flyer a desperate attack ad would be an understatement.
Then look at the other pages from this expensive glossy: 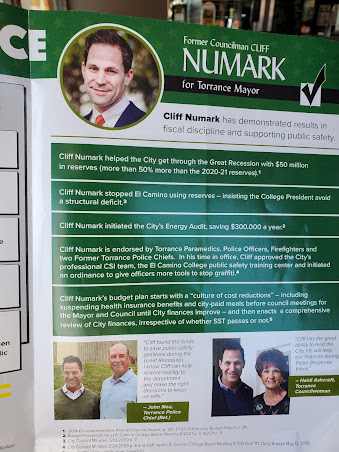 Numark's headshot at the top is not very inspiring. One gets the feeling that he had the photo taken last minute.
Numark's list of accomplishments have some good points about him: 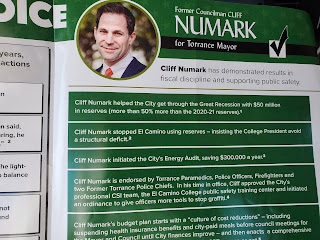 In the first item listed above, Numark takes credit for setting up $50 million in the city reserves. He was just one of seven city councilmembers. Mayor Frank Scotto was leading the fight to keep the city fiscally sound at the time,too. He didn't accomplish any of that on his own.
Numark pushed for an energy audit that saved the city $300,000 a year. That is something that write about. He deserves credit for that kind of reform, but remember that $300,000 a year is a drop in the bucket compared to the massive deficit spending which the Torrance City Council had approved through 2015.
Then he lists (yet again) the fact that he has been endorsed by public safety officers. Yes, he received the endorsement of the Torrance Police Officers and Firefighters Associations, but I have found that those endorsements don't speak for every officer, and Torrance voters are not swayed by them as much as they used to.
Sure, he scored the endorsement of retired police chief John Neu, too. Frankly, I find that endorsement rather suspect, if not unethical. Isn't the chief of police of any city supposed to serve and protect all residents? Why would he get involved in the political fray over a mayor's race?
As for Councilwoman Ashcraft, I must say that I have lost all respect for her. She's supposed to be a conservative, but she went all in for the liberal candidate for mayor. She also went along with raising the city's sales tax and voting for one budget after another which drew extensively from the city general fund, until the reserves were down to less than $1 million. Ashcraft was a big part of the fiscal mismanagement of the city, and she has no business sticking her finger into local politics at this point. I had even supported her two years ago to replace Tim Goodrich, and she turned into quite the disappointment.
Here is the backside of Numark's flyer: 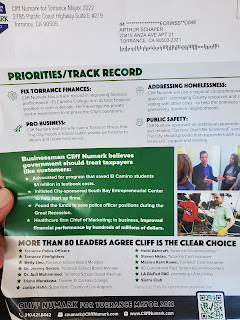 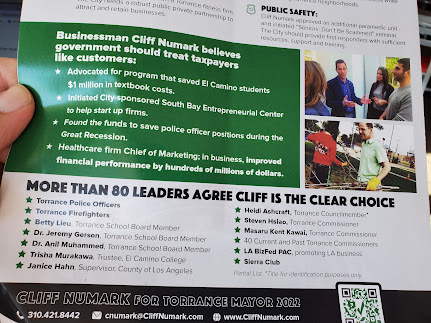 The only thing worth commenting on here is that despite the massive number of endorsements scooped up by the Numark campaign, he still fell short in his bid for mayor. That is pretty astonishing.
One reason, I believe, that Numark failed in his bid for mayor is that he did not connect with voters on a routine, rigorous basis. While I was walking precincts in District Five, knocking on every door, I noticed one of Numark's canvassers a few doors behind him. Clearly, he was not very motivated, since he was not moving very fast. Furthermore, he was not hitting every door as I was. Last of all, I could tell that he was only canvassing for Numark, while I was dropping literature for George Chen and Aurelio Mattucci.
Numark thought he could win the race because he was the machine candidate with all the money and the right connections. Other volunteers along with myself went to every length to connect and convince voters to support our candidates. I wouldn't be surprised if the bad memories people had about former mayor Pat Furey also motivated people to vote a different candidate.
Final Reflection
I can't write enough how significant this Torrance mayoral election was. The Scotto-Furey-Geissert political hegemony in this town was crushed once and for all. Every political machine operative saw his efforts crushed in this election, as well. Mayor George Chen was outspent and out-endorsed, and yet he still won!
The voters saw through all the thick, slick ads that Numark and company foisted on the voters. The retiring El Camino College trustee sent out at least three of these large flyers, and apparently he sent them out to a wide array of voters, regardless of their political affiliation. Despite this political bombardment, he still lost. The people of Torrance want real change, real leadership, and they do not want the same-old politicians who talk big, back themselves up with lots of political endorsements and establishment connections, only to disappoint the voters yet again.
Real change has come to the city of Torrance, and I am so grateful that I could be part of the transition.
Posted by Arthur Christopher Schaper at 11:27 PM