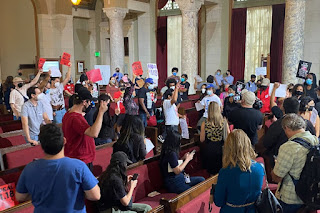 What is happening to the Left in Los Angeles?

They are canabalizing each other.

They tried to shut down the LA City Council meeting earlier this week simply because the city council is finally realizing that they cannot shirk their duties to serve and protect the residents from homeless miscreants and rising crime.

The LA City Council is (finally) cracking down on crime (little by little), such that even regressive leftist city councilmembers like Mitch O'Farrell have to put public safety ahead of woke pandering.

And then there's City Councilman Paul Koretz. Is he a good guy? No, he's a regressive liberal like almost every other member of the LA City Council.

Yet he had the guts to call the Antifa-BLM-Marxist hate groups desecrating the city council and celebrating crime and homelessness over their abusive disruptions and violent behavior in and out of city hall.

Of course, the Antifa empire has struck back. Check out the hate that they are spewing against Koretz now:

Funny that *THIS* guy is comparing others to Jan 6 white supremacists 😭😭😭 pic.twitter.com/lUUdyRboUO

Paul Koretz is Jewish, and yet they are calling him a white supremacist. Really.

On May 30th, as LAPD officers were brutalizing huge numbers of demonstrators across the city, LA Councilmember Paul Koretz tweeted his first public statements regarding the police murder of George Floyd in Minneapolis:

Let's cut through the crap right here. The 2020 riots were another extension of well-planned political outrage to shift the 2020 election. Left-wing agitators use any and every excuse to destroy public property and harm innocent lives every time they perceive some sort of injustice. There is no justification whatsoever to destroy property or harm anyone in the name of "social protest."

“I will not stand for the lives and property of my constituents being endangered,” he wrote. “I’ve spoken to LAPD command & made clear my full support for our officers to maintain order in the coming days throughout my district.” [Emphasis added]

In that same thread, Koretz states that the looting of property was “no less troubling” than the “death of George Floyd” — he later was forced to backtrack on this claim, but he never apologized — and says that he asked the LAPD to “clamp down on criminal actions.”

Every city councilmember should have spoken out just as boldly against such rampant criminality.

Koretz continued to cheer the LAPD, demonize demonstrators, and privilege the property of his wealthy (white) constituents over the lives of Black people in further statements to the press.

Those "demonstrators" in all too many cases violated public order, undermined the rule of law, engaged in vandalism, looting, robbery, and assault. There is no justice in any of that, and none of those despicable acts can be called "demonstrations."

Councilman Paul Koretz called for law and order, and he gets called a "white supremacist." Really. This sounds like blaming the victim, if you ask me.

Consider what Woocher followed up with next:

But it’s not just Koretz’s tweets I’m concerned about.

He's worried about tweets in the first place. That is just ridiculous. But I digress ...

More important are his efforts to stop the cuts to the LAPD demanded by Black Lives Matter — Los Angeles (BLM-LA) and ally groups through the People’s Budget LA campaign. Instead of listening to Black-led organizers in his own city about how the police are a fundamentally racist institution rooted in slave-catching that must be dismantled, Koretz is doing all he can to defend the cops.

If Woocher bothered to listen to black people in the city of Los Angeles, he would find a lot of voters who want to stop the crime sprees terrorizing their communities. Cutting the police has disproportionated harmed BLACK AND BROWN communities. What kind of racist would be so committed to making their lives harder?

For the record, I will never apologize for stating, writing, shouting that All Lives Matter. It's just so important to call out the rank, racist hypocrisy of these left-wing hate groups doing nothing but damage in LA City and declaring war on their own politicians to boot!

This needs to be called out for what it is: Paul Koretz is upholding white supremacy. He is acting to protect systems that privilege the wants of rich white people at the expense of Black lives and communities of color. Koretz’s actions make it clear that in his mind, preserving white comfort is more important than alleviating Black suffering.

Jewish city councilman Paul Koretz is upholding white supremacy. Really? Sounds like the same kind of talk the Nazis used against Jews as they targeted them, stripped them of their property, then forced them into ghettos. Sounds like more insurrection to me ...

On June 16th, Koretz was one of just three councilmembers who voted against requesting an analysis to look at cutting between $100-$150 million from the LAPD to reinvest in communities of color.

Koretz does not want to cut LAPD funding. Lots of people in the city of Los Angeles and throughout Los Angeles County do not want cuts to law enforcement. I commend Koretz for having the courage to buck his colleagues at the time, who clearly got all caught up in the Defund the Police frenzy two years ago.

Koretz is taking a stand on key issues. He is putting public safety as a priority in the city, and he has joined with his colleagues to confront the homelessness crisis.

And how does Antifa-BLM-Marxists respond? They call him a Nazi. This is just disgraceful. I hope that more residents in Los Angeles rise up and push back on this hate. There is no room for this shameful rhetorical bigotry, especially to target a city councilman who is focusing on bread and butter issues that actually affect the city as a whole.

Posted by Arthur Christopher Schaper at 11:52 AM