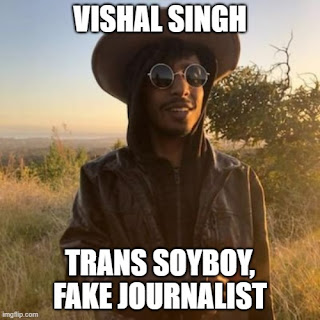 For the last few days, I have been covering one of the biggest wannabe journalist failures in Los Angeles County: Vishal Singh.

This guy is so perverted, distorted, and just plain sad. He doesn't know which pronouns to use. He got punched in the face last year after harassing and violently doxxing patriots and other common-sense residents in Los Angeles. He has been crying and whining about the so-called "unhoused" residents in Los Angeles, all the while enabling the harm and destruction of the homeless.

He just got cancelled from an Asian-Pacific Islander conference because of his violent acts and unethical (illegal) doxxing, too.

And now, well, let's just say he's having a bad case of the (well-deserved) sads!

First, he's crying because everyday people are getting tired of his hateful antics, and they are calling him out publicly for all of it:

It has been brought to my attention that suspected members of the far-right attempted to come to my home this week. The incident seems to be connected to these defamatory posters and stickers about me that have been going up across Los Angeles. If you see any of these, DM me. pic.twitter.com/eZpfhI5TNH

He deserves this campaign of exposure. He has routinely shamed, endangered, and attacked men and women of faith and courage who just want what is best for their families. How do you like it, Vishy? Of course, one of the most Trump Deranged propagandists in LA County tried to come to Vishal's aid, but to no avail:

This is absolutely horrifying. Andy Ngo lied about what happened- once again sharing an edited and inaccurate video with his followers. This is the outcome. https://t.co/BZ0kCDSUCR

More on her later ... And for all of this, this is how Vishal copes:

there are real-ass people walking around this city putting up defamatory posters about me while I sit on my couch and get stoned with my cat.

some people have weird priorities, man.

You can tell he's seriously distressed about this--and it serves him right. Nothing says "weird priorities" like smoking marijuana at home with a pet because no one else wants to be around you.
People are not kidding when they point out that transgenderism is a mental illness. Anyone who wants around calling themselves all kinds of pronouns beyong what their own biology dictates clearly has issues. He claims that everyone else has weird priorities, but he's the one who stalks and shames and endangers innocent people with his false reporting, then goes on violent junkets with Antifa harming real journalists (independent and corporate) in the field, and to wrap it all up he gets high with his cat. Really? Vishal is having the sads! (And he deserves it!)
Posted by Arthur Christopher Schaper at 11:49 PM