Hell Freezes Over: Los Angeles City Council Cracks Down on Homelessness, Stands up to Antifa Marxists 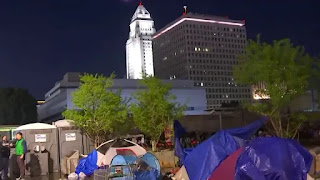 I have to write it again: hell is freezing over.

The left-wing Los Angeles City Council is actually doing something constructive about the homelessness crisis in the city, i.e. taking steps to protect children, parents, and everyday citizens from the encroaching homeless problem invading the streets, creating unsanitary conditions, and harming the law-abiding, taxpaying residents.

On August 2, 2022, the city council on a 11-3 vote, voted to extend the ban on homeless encampments throughout the city. And they took this much-needed action despite massive, disruptive, even violent protests from Antifa bigots, cultural Marxist haters, and the general sad, sordid assortment of left-wing agitators who live at home with their parents and refuse to get jobs.

Check out the outrage from LA City Council President Nury Martinez as the city moved forward to expand the homeless site bans throughout the city:

Councilmember Martinez says that people shutting down City Council is "disturbing" and goes on to say that people speaking at public comment "don't look like people living on the streets" pic.twitter.com/yTJ1mrvFBW

Indeed, most of these hateful militants do not care about the homeless. If they did, they would not be fighting to keep them on the street in depressed, broken squalor. They would be fighting to get them off the street and stop enabling them to collapse in utter poverty.

This measure is about protecting kids and protecting public health. Think about that when one considers that a host of angry activists tried to shut down the city council to prevent passage of this amended ordinances. Antifa and other Marxist hatemongers in the city of Los Angeless want to endanger children, and they want to make it harder for parents to get quality care for their children. It's just unconscionable how hateful these pro-homeless enablers are!

The measure was passed by an 11 to 3 vote, with Councilmembers Mike Bonin, Nithya Raman and Marqueece Harris-Dawson dissenting.

The ordinance amends a city law regulating where homeless encampments can be. Municipal Code 41.18 bans sitting, sleeping, lying or otherwise obstructing the public right of way in multiple areas.

Every city in Los Angeles County needs to pass a similar ordinance. The city has set up temporary housing for homeless vagrants in the city. There is now no excuse for them to scare children and make the public walkways unpassable.

The council voted 10 to 1 in favor of the ordinance last month, with Bonin as the lone dissenter. However, a second vote had to be conducted on Tuesday for the measure to pass because the initial vote was not unanimous.

In addition to banning encampments near schools and daycares, the ordinance expands Municipal Code 41.18 to include anywhere within 2 feet of a fire hydrant or fire plug, within 5 feet of any operational or utilizable entrance or exit, within 10 feet of a loading dock or driveway or bike paths or other areas within a street.

That is a great idea, too. Fire hydrants must be freely available in case of local disasters or local needs. The homeless have no right to make things more difficult for everyone else just because they have fallen on (or choose to remain victim of) hard times.

It also imposes bans regarding manners that interfere with activities the city has issued a permit for or anything that restricts accessible passage as required by the Americans with Disabilities Act.

Now the Left has yet another problem. For all their talk about fighting "able-ism" and championing the needs of disabled Americans, they now have to figure out how they can care about both the homeless and the disabled, when the homeless encampments are harming the free travel of disabled individuals throughout the city! 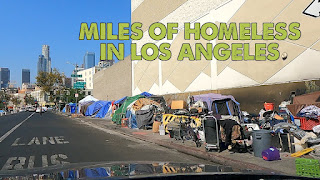 The existing law already protects the public right of way within 500 feet of "sensitive" facilities, which includes schools, daycare centers, parks and libraries - although this part of the law only applies if each specific location is designated for enforcement by the council.

The amendment was previously approved by the council's Homelessness and Poverty Committee.

Supporters of the ordinance say it keeps children safe. Councilman Mitch O'Farrell also argued at the council meeting that it is inaccurate to claim the homeless have nowhere else to go. He said the city has several successful and robust programs to help the homeless.

I am shocked that a hard-core progressive like O'Farrell is taking on this issue. Something has really changed in Los Angeles, and lets hope that there is more of it!

"I'm going to stand up for this council," O'Farrell said. "Everyone here is compassionate, deeply caring of people who are the most vulnerable among us. I'm not going to buy into this rhetoric that we're monsters, that we're murderers or anything like that. It's all nonsense. I'm just not going to accept that false narrative any longer. We should never accept it at all."

But Bonin contested that the ordinance is based on a false premise that homeless people are refusing to go indoors and that the city has enough space for them. He claimed that 60% of people living on the streets of Los Angeles cannot find shelter.

Mike Bonin is a swamp creature and a total idiot. The voters in his district hate him so much, that they tried twice to recall him. The second effort fell about 100 verified signatures short of success. However, Homeless Mike got the message, and he has announced that he will not run for re-election. Let's hope Gascon gets the message, too.

He said the ordinance was a "distraction from where our focus needs to be," such as making moves to end homelessness.

The measure was approved after Los Angeles Unified School District Superintendent Alberto Carvalho said earlier this year that teachers, principals and parents have complained about homeless encampments near schools.

Even bureaucratic leftists like former Miami-Dade superintendent transplant Carvalho have had enough. Of course, his interest in this issue has nothing to do with actual regard for the parents and students in the city. This "drastic" action is needed because Los Angeles Unified's school enrollment is plummeting drastically, and he needs to do something to make sure that more kids don't drop out, that more parents don't take their kids away from those awful schools.

"I've seen elementary schools with conditions that none of us as parents would find acceptable for children. Individuals with mental illness, some of them absolutely unclothed, shouting profanities in the listening ear of children," Carvalho told the council at the time.

Remember that Antifa, Black Lives Matter, and other left-wing activists think that this kind of perverse behavior is acceptable around children. And they have the audacity to call pro-family activists, patriots, and other common-sense LA County activists "pedophiles and predators." The real child abusers, the real perverts, the real pedophiles are Antifa and their militant enablers.

Those who violate the ordinance face an infraction or citation. But a person who "willfully resists, delays or obstructs a city employee from enforcing this section or who willfully refuses to comply after being requested to do so by an authorized city employee" can face increased fines and a misdemeanor charge.

It's about time that the city of Los Angeles took on the homelessness industrial complex. So many homeless live in Los Angeles because the weather is good, and the benefits are even better. Instead of solving homelessness, politicians and bureaucrats are subsidizing this problem, inviting more people to live on the street and expect a hand-out, rather than getting their own hands out to help people with a hand-up.

It's really sickening how all of these selfish left-wing agitators go out of their way to put the needs of homeles vagrants ahead of the needs of productive, law-abiding citizens. For the record, I understand that some people end up homeless because of domestic violence issues, but those individuals do not actively remain homeless. They don't want to live on the street. They take every step they can to get off the street and get help.

Most of the homeless are drug addicts or mentally ill. These individuals need help, not enabling. Enforcing the law, protecting the public spaces, enhancing public safety are appropriate measures needed for the well-being of the city of Los Angeles. I am surprised and pleased that the LA City Council is finally--finally!--taking steps to deal with this problem assertively.

Posted by Arthur Christopher Schaper at 12:36 AM