I received this alert from a contact in British Columbia. Teachers working in the one local school district, the Society of Christian Schools of British Columbia (SCSBC) are raising the alarm about the infiltration of homosexuality, transgenderism, and other anti-Christian, anti-natural law perversions that are becoming all too pervasive .... in the Christian Schools!

Teachers are speaking out against this unspeakable evil, which shocks the conscience, undermines parental rights, violates natural law, and makes a mockery of the Canadian Charter of Rights and Freedoms.

Here's the preliminary statement I received from my contact in BC a few weeks ago:

Dane Splinter is the Bible teacher at the Surrey Christian Schools who teaches both SOG123 and LGBTQ acceptance while hanging a LGBTQ rainbow flag at the front of his classroom.  Please pass this on to your contact that exposes perverted teachers!

Attached are reference points to both of these perverts and their sodomy.  I can assure you that more information is to follow and that I will continue to follow up with other US based resources as the situation warrants.

So, who is this David Loewen guy?

The SBSCB issued the following press release about him:

David brings to SCSBC deep experience in Christian educational leadership. He has spent over 25 years as an administrator and teacher in BC Christian Schools, including serving from 2011 to present as Superintendent of Surrey Christian School. In his time at Surrey, David oversaw significant school growth and led the implementation of two five-year strategic plans that resulted in the renewal of many significant aspects of the institution. Prior to his role in Surrey, David served as Principal of White Rock Christian Academy, and before that as Principal of Abbotsford Christian School. He has led and participated in numerous school evaluation and leadership reviews for the Ministry of Education, for SCSBC, and for Christian Schools International. He has served on the board of the Federation of Independent Schools Association (FISA) from 2012 to the present.

There is nothing untoward here. Of course, schools and their official press releases seek to convey information with as little controversy and fanfare as possible.

David has demonstrated a lifelong commitment to professional development and learning. He has a PhD from the University of Victoria in Educational Leadership, Administration and Organizational Theory. He is currently pursuing an M.A. in Theological Studies from Regent College. David is passionate about applying his knowledge and skills to invest in educational leaders and organizations. He has served as Adjunct Faculty in Trinity Western University’s M.A. in Leadership Program, teaching a course in Team Leadership and Conflict Resolution. He has consulted with a number of Christian Schools on strategic planning, including vision and mission development. He is a frequent keynote speaker, workshop leader, and author of articles on topics relating to Christian education and leadership.

David enjoys participating in and coaching sports including volleyball, basketball, and rock climbing. He likes to recharge by spending time in nature, including hiking, camping and canoeing. David is happily married to Sharlene and has three children: Chloe, Olivia, and Ilya. The Loewens are members of Hope Community Church.

David is widely regarded as an energetic, passionate, and articulate leader. He often speaks of a desire for Christian Schools to know and tell their “story within the grand story”. This involves leaders understanding their school’s particular story arising from their context and history and relating that story to the grand story of Jesus and His announcement of the coming of the kingdom of heaven. The Board is pleased with Dave’s appointment to the Executive Director position and looks forward to working with him on carrying forward the mission and vision of SCSBC.

Some warning signs start to emerge in this last paragraph. He wants schools to "tell their 'storty within the grand story.'" What does that mean? Where is the emphasis on Christian doctrine or Biblical revelation? All of that is seemingly missing from this initial announcement. There is something amiss about this.

So, what is happening in the school? One of the teachers, Dane Splinter, is pushing the boundaries of propriety by promoting homosexuality and transgenderism.

When we look at Splinter's Twitter feed, we find out where this guy really stands on issues: 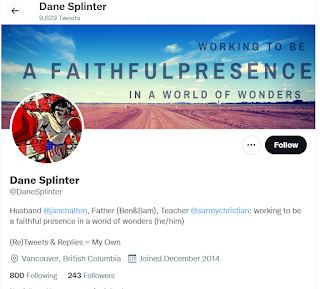 The fact that this guy has preferred pronouns is a bad sign already. His avatar showcases a boxer wearing shorts with the American flag pattern on them.

Here are some notable and disturbing tweets from this so-called teacher at a Christian school:

When someone talks about the book in terms of authors rather than Author, we are witnessing a secularized skeptic who does not hold the Word of God in high esteem. But it gets worse:

He wants to promote sexual confusion, degeneracy, and perversion. This is absolutely terrible, and very disturbing. Dane Splinter has no regard of the authority of God's Word, and he disdains the wisdom and direction of God's Word. One cannot claim to be welcoming of anyone if we insist on letting them identify with a lie. Homosexuality and transgenderism are false identities. No Christian, no Pastor, no leader or teacher in the church or a church setting can accept these behaviors and consider them identities.
That is a lie from the pit of hell. Paul writes to the Corinthians:
"9Know ye not that the unrighteous shall not inherit the kingdom of God? Be not deceived: neither fornicators, nor idolaters, nor adulterers, nor effeminate, nor abusers of themselves with mankind, 10Nor thieves, nor covetous, nor drunkards, nor revilers, nor extortioners, shall inherit the kingdom of God. 11And such were some of you: but ye are washed, but ye are sanctified, but ye are justified in the name of the Lord Jesus, and by the Spirit of our God." (1 Corinthians 6:9-11)
And Splinter also shared this tweet:

Happy Birthday James Baldwin!
Born on this day in 1924.

James Baldwin was an out homosexual, and he was hostile to faith. There is no place for celebrating this corrupt character in a church or Christian school seeting.
To put it mildly, there are some really bad teachers at the Society of Christian Schools, and more is going to be revealed shortly!
Posted by Arthur Christopher Schaper at 7:20 PM