President Trump is an outsider. He has not fostered lots of relationships in Washington DC. That has a lot of pluses.

But there are problems with this, too. He doesn't know the people who have been working in--and working over--Washington DC.

For the last two years, most of the people in his inner circle seem committed to fighting against his agenda rather than pushing for it.

Another example of this has occured with his decision to renominate Chai Feldblum, and Obama holdover, the Equal Employment Opportunity Commission (EEOC). This board reviews cases that deal with discrimination in the workplace.

Feldblum is an aggressively gay LGBT Activist. She has spoken out against individual liberties, and she has clearly announced that "gay rights" are more important than freedom of speech, assembly, and proprietary rights. 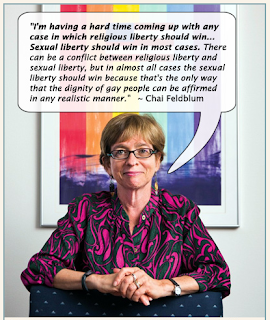 This woman is "The Dragon Lady of Religious Liberty" according to US Senator Mike Lee, who is the only US Senator blocking her re-confirmation.

His efforts have proven successful, and if there is no vote on her reconfirmation before the US Senate Health and Education Committee by December 31, then she will lose her first bid and the President will have to submit a new roster of names or the same names a second time.

It is essential that President Trump withdraws this nomination right away.

Here's a call to action form copied from the American Family Assoication. Please use and share it with others and let's stop LGBT Bigotry in our federal government!

Dear Arthur,
In December 2017, President Trump re-nominated Chai Feldlbum to serve as Commissioner of the EEOC. Feldblum is the same anti-religious liberty and pro-LGBT zealot whom President Barack Obama nominated in 2010. Her previous term ended July 1, 2018. It is time that President Trump withdraw Feldblums nomination and replace her with a Constitutional conservative who will protect the First Amendment.
Feldblum's influence at the EEOC places a so-called right to sexual deviancy (sexual sin) over and above religious liberty. Her mixed-up views force Christians to abandon their deeply held religious beliefs on marriage and sexuality.
For example, when there is a legal conflict between religious liberty and sexual deviancy, Feldblum has said:
I'm having a hard time coming up with any case in which religious liberty should win...Sexual liberty should win in most cases. There can be a conflict between religious liberty and sexual liberty, but in almost all cases thesexual liberty should win because that's the only way that the dignity of gay people can be affirmed in any realistic manner (emphasis added).
Contact the White House and urge President Donald Trump to withdraw the nomination of Chai Feldblum for Commissioner of the Equal Employment Opportunity Commission (EEOC).
The adverse effects of Chai Feldblum's warped worldview have infected the EEOC resulting in numerous rogue actions by the U.S. Executive Branch.
In 2014, Feldblum's EEOC, with assistance from the ACLU, argued for a transgender employee's rights before the U.S. Court of Appeals for the 6th Circuit. In this case, a Christian business owner of a funeral home had fired employee Anthony Stephens, who was undergoing "gender transitioning" and wearing women's clothes to work. The business owner said this violated his Christian beliefs, but the EEOC argued that a Christian business owner could not fire a transgender employee for religious reasons. The court agreed.
President Trump, who campaigned on and issued an Executive Orderprotecting religious liberty, said, "Faith is deeply embedded into the history of our country, the spirit of our founding and the soul of our nation...[this administration] will not allow people of faith to be targeted, bullied, or silenced anymore."
The re-nomination of Chai Feldblum, one of President Obama's most ardent opponents of religious liberty, grossly undermines President Trump's promises as well as his instructions to the Department of Justice to protect religious liberty.
Thanks to Senator Mike Lee (R-UT), Feldblums nomination remains stalled in the senate because of Lee's objections which are in line with the objection of the American Family Association.
Contact the White House and urge President Donald Trump to withdraw the nomination of Chai Feldblum for Commissioner of the Equal Employment Opportunity Commission (EEOC).
If our mission resonates with you, please consider supporting our work financially with a tax-deductible donation. The easiest way to do that is through online giving. It is easy to use, and most of all, it is secure.