Here's another piece of good news.

One of the Women's Marches is not going to march.

Chicago, Illinois is the third largest city in the country, and in one of the bluest states in the nation.

Yet even there, the bigotry, the Jew Hatred, the liberal infighting and corruption have proved too much even for the most ardent, left-wing supporters to stomach. 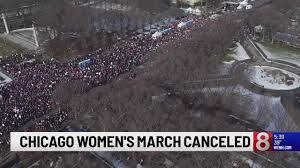 The Chicago Women's March is cancelled!

Here's the report from Associated Press:

Accusations? More like affirmations. Louis Farrakhan is a rabid Jew baiting bigot, and he has never withheld his disgusting for any group of people, especially Jews.

The press will do everything they can to downplay this setback. I just wish that this fallout would come to Los Angeles, too. How can anyone stand with a movement so dedicated to those who hate women and minorities? (which includes white men at this point, when considering the state of California).

Local organizers blamed high costs and not enough volunteers as key reasons for abandoning the Jan. 19 rally. An estimated 250,000 people participated in the event in January 2017 , causing organizers to cancel the march through downtown Chicago due to security concerns.

This is liberal spin. The Jew Hatred of Linda Sarsour, coupled with her flagrant celebration of Sharia Law, doomed this program from its outset. High costs? Blame the liberals who have overrun and run Chicago to the ground. Would someone please tell me why anyone would promote this crappy movement?

Slow to condemn? They didn't bother to condemn the bigotry at all. In fact, they have been looking the other way on this whole corrupt perverse reality for the last two years. How many times has Linda Sarsour and her Jew-hating self spoke out during this movements? How many times did she show up and pronounce her hatred of the President and his policies--all of which have actually helped advance the causes of women, especially in the private sector?

Would someone please tell me why this news is getting such little coverage? Why is it that the mainstream media goes to great lengths to promote every liberal cause and overlook over negative thrend in any anti-Trump movement?

It's also worth pointing out that the city of Torrance promoted their own Women's March in October, and the event was a total dud. Very few people showed up, and some of the elected officials who were expected to speak did not bother coming.

The program was supposed to last from 10am to 2pm that day, and yet the staffers and organizers rolled everything up by 1:30pm!

The Women's March has had an incredibly difficult time holding together its conflicts of intersectionality. The women are not breaking down over race and religion. With Jews, it ends up with both, since there are Jews by faith, and yet many more who are Jews as a member of ethnicity and genetic background.

The fact that the movement would bring in Muslim leaders, those who advocate for Sharia law in all its aspects, descredited the whole movement at the outset. The cancellation of the Chicago Women's March is good, but the organizers in the other cities need to stand up the bigoted speakers and cowardly leaders. This Women's March is not about women, but about left-wing, anti-American ideology, nothing more.

And therefore, it should be nothing more.