Fireworks (And Early Christmas Presents) in Cudahy (Photos and Report) 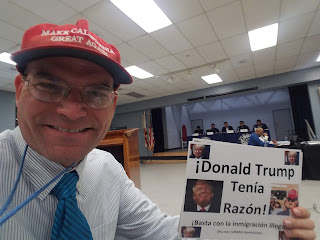 I wasn't sure whether I wanted to go the Cudahy City Council meeting last night. On December 4th, 2018, I had attended the city council meeting and royally mocked the losing corruptos who got shut out of re-election.

It was an early Christmas Present that all of them got the boot. I will never forget watching Cristian Markovich fleeing the Cudahy City Council chambers on Santa Ana Street two years ago. Most of the members of We the People Rising have told me that one of their favorite activist events occured that January evening in 2016.

We had made some headway in Huntington Park, then we found out about the city of Cudahy. I was surprised to learn that in spite of all the pro-illegal activism in the Southeastern Los Angeles County area, there was one elected official who had refused to support any kind of a so-called sanctuary city policy: Jack Guerrero.

And we had fun driving these corrupt councilmembers crazy for the next two years! 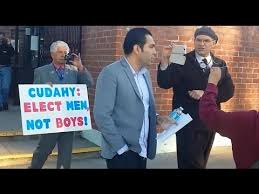 Since that January 11th, 2016 evening, I saw some of the most egregious violations of the Ralph M. Brown Act. The city attorney was repeatedly interrupting members of the audience. The people in the city were up in arms during a suddenly-called special meeting. The council insited on moving the city council meetings because they feared for the safety.

Really? They actually feared the wrath of the constituents in their city, fed up with the corruption and abuse of power.

But ... what was going to happen at the December 18th, 2018 Cudahy City Council meeting?

I actually had a really good time.

First, Edin Alex Enamorado, who has been pushing pot in the city of the last two years, caused a big disturbing for attacking me at the podium during a public hearing. It was really strange. What did I have to do with the continued issuance of marijuana permits in the city of Cudahy?

He started talking about Jack Guerrero for some reason, and the audience burst into applause.

It was really gratifying to see everyone in the audience boo him and shout him down, especially when he started attacking me. He was really out of line.

Most of the people in the audience yelled at him: 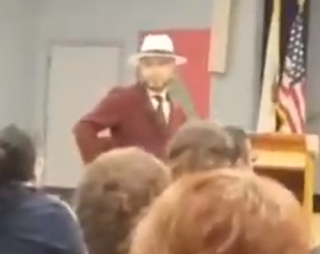 The room had to be cleared because of the growing disturbance all over the city council chambers.

This didn't seem fair at all. Why should anyone person ruin the meeting for everyone else? Things were really getting heated. I joked with the two deputies on scene: "I didn't disrupt the meeting. This was not my fault!"

They got the message, then ordered everyone to clear out of the room. 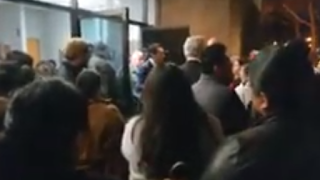 Chris Garcia would not have looked good clearing out the room the way he had done. It would have probably invited some uproar throughout the city if he had told everyone to leave. He came outside and said to everyone that the outbursts needed to stop.

I had prayed God for favor that all of us would get back into that city council meeting. And it worked out.

While walking back into the meeting, Nestor Valencia, one of the city councilmembers from Bell, gave me a high five. "Hi Arthur!" He said to me. At the time, I didn't know who he was. He then told me that he has listened to a lot of my stuff. "I see you all over the country!" he told me. He had to add that he did not agree with me, but I was glad that he greeted me.

Once everyone settled back into the council chambers, more members of the community spoke out against the ongoing push for marijuana into the city. The city council, on its final day before the reoganization of the city council members, was determined to push through every marijuana ordinance possible. It's such a shame to see what is happening in that city.

Two elected officials want to stop the marijuana, and yet there is no majority that is interested in doing what is best for the city. It must be really frustrating for residents trying to make a difference, to make things better. People need to pay more attention to what is happening in their own cities. The vote, the outcomes should not be so arbitrary. It's untenable.

The came the moment I had come to see: out with the old, and in with the new: 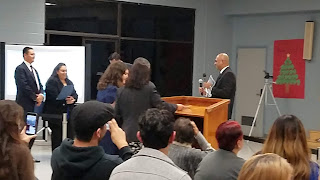 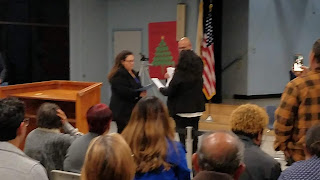 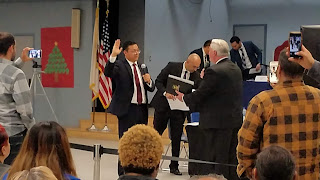 It was really vindicating to see Jack Guerrero, who has done nothing wrong and has been outspoken on a host of issues which Cudahy residents care about, have his seat restored to him on the city council. He had been unlawfully removed from the city council, according to numerous reports. There he was, re-elected to another seat. Incredible.

And yet, who knows what is going to happen?

Then things really got heated at the end of the meeting.

The new city council, having installed Jose Gonzales to be the next mayor, was having a really difficult time of dealing with the new transition of power. It was pretty clear that Gonzales is taking all his orders from Chris Garcia, who is irrepressibly corrupt.

Elizabeth Alcantar is a swing vote on every issue. She refused to allow the mayor to adjourn the meeting. Jack Guerrero fought hard a number of times to seek a stay on a number of the items which had been rammed through at the last minute.

An ongoing dispute between the city attorney and Guerrero broke out, and then the city council went into recess for five minutes to figure out what to do.

Naui began wandering around the room, harassing and irritating others. He tried to start a fight with me, but I just showed up a picture of his brutal punishment after harassing women and children in 2006: 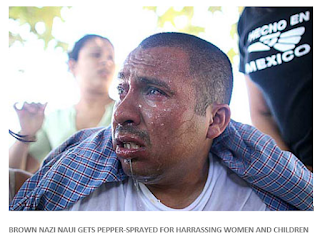 He was so incensed by it, he ripped it out of my hands!

Wow! It really set him off. No matter how many times he wants to repeat "criminal! criminal!" to me, their shame, their hatred remains unabated. They just can't wear me down!

The city council reconvened after the recess. The city attorney refused to recognize Councilman Guerrero's motions. It was really clear that the city council corruption was not going to get by as easily as it had done in the past.

Chris Garcia and the big money marijuana industry in the region had issued the most blistering attacks against Guerrero, and none of it worked. The previous, corrupt city council colluded against the law to have him removed from the council. He got re-elected in his own right notwithstanding. At this time, there is another person on the council who shares his concerns about issues, too.

Chris Garcia was clearly cajoling the newly-appointed mayor, who was going back and forth and had no idea what he was doing. He even adjourned the meeting without a vote from the council! The attorney told

Then things escalated from there.

Nazi Huitzilopochtli began hounding Jack Guerrero. Residents of the community have really grown tired of this guy. They saw him harassing other people in the audience. The sheriff's deputies stepped in and they arrested him! 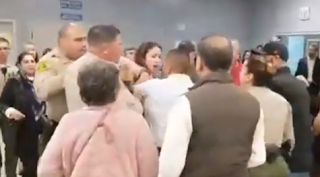 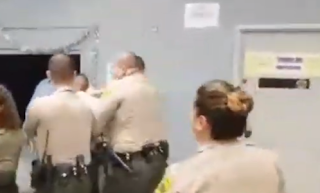 It was a glorious sight! Indeed, it was quite a turnaround. JUSTICE!

Outside the city hall, I celebrated with other people from the city. Some of them even shouted "Viva Trump!"

I shouted back "Feliz Navidad!"

A few of the residents reached out to me afterwards, and they wanted my help with making things better in the city. I was really honored to be there. Some of the residents had greeted me inside, and others passed by and told me "Thank you for coming!"

There were so many Christmas presents--of a sort--that came out of this city council meeting, and I am really glad that I had come. I wasn't even sure I was going to bother coming. After I had arrived, I couldn't even find a parking spot the first time around! Then I came into the parking a lot a second time, and there was a spot for me right there!

Everything really worked out for me that night. I hope that things work out for the better for the residents and the new city council too:

Who could ask for anything more during a Southeastern Los Angeles County City Council meeting? 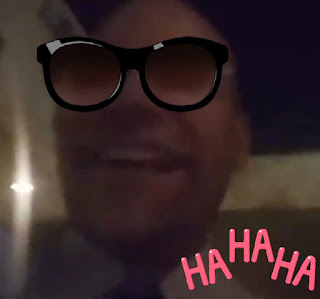