Is the housing market crashing?

In California, it's definitely cooling off.

Should anyone be surprised? Middle-income and upper middle-income earners are having a harder time making it in California.

I have visited a number of states in the last three months, including New Mexico Arizona, and Texas. It is shocking how cheap the cost of living has become compared to California. The gas prices were as low as $2.15 a gallon on Thanksgiving weekend.

In stark contrast, gas has hovered as high as ... $5.29 per gallon in Downtown Los Angeles.

I kid you not: 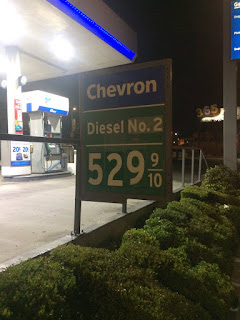 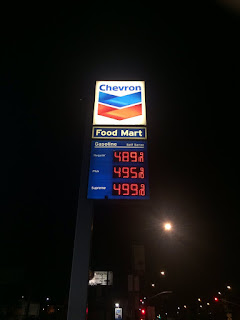 Is it any surprise that fewer people want to purchase a home in Califorina?

Southern California home sales tumbled 7.5% in October from a year earlier, extending a broad slowdown in the housing market, according to a report released Thursday by CoreLogic.
Last month was the third straight month of declines, and the 19,193 homes that sold were the lowest number for an October since 2011, before the housing market took off on its multi-year upswing.

Wow. The fact is that citizens are not bottomless pits for money for the state. The California political class doesn't seem to understand that the people of the state of California are not going to keep giving up money forever.

Real estate agents trace the sale declines to buyers’ being increasingly tapped out by a combination of rising mortgage rates and years of steady price hikes. Buyers who can afford to pay more fear investing money at what might be the top of the market.

How about that?! Californians are "tapped out". No surprise there. The gas tax, the car tax, the Cap and Trade betrayal, all of this is wearing down the purchasing power of California's residents.

By the way, dear voters, you had the chance to cut the gas and car taxes during the last election. Just sayin' ... 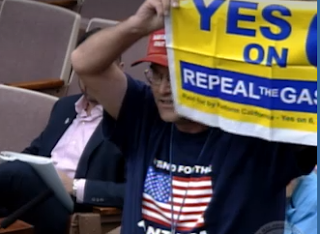 As a result, homes are sitting longer and more sellers are scaling back ambitions.

They are bringing down their prices. What's going to happen when six months passes, and no one wants to buy?

Sorry, but Torrance may be a great place to live, but I don't know how many people are going to drop that kind of money for any kind of property, especially a home that is not located right on the beach coastline.

Seventeen percent of L.A. County listings on Zillow had at least one price cut in October, the greatest percentage in at least eight years. The number of listings was up 30.5%.

More houses for sale, more drops in the price, and behold the housing market cools off, big time. Another friend of mine was looking at homes in the Hollyglen section of Hawthorne, CA. A one-bedroom home, like the tract homes in Torrance, was selling for $800,000. "Not worth it," he told me. It's not as though he had a a large salary to dish out for purchasing a home, by the way.

Yet no matter one's pay grade, housing costs at such a height turn off anyone with common sense. Three years prior, another home in Hollyglenn cost $500,000. How can anyone expect a prospective buyer to drop that kind of money?

“It’s really been kind of slow,” said Suzie Titus, a real estate agent who specializes in Lakewood. “There is not a lot of activity.”

So far, the cooling is just that: a pullback from a red-hot housing market, not a full drop-off.
Aaron Terrazas, an economist with Zillow, noted in a recent statement that, though price cuts are increasingly common, they so far aren’t very steep. Inventory is also rising, but from rock-bottom levels.

Well, expect a growing selloff if Sacramento politicians decide to cut into Prop 13. Imagine the selling off that will emerge all over the state if those property tax caps are busted.

“While the pendulum is slowly swinging back in favor of buyers, make no mistake that sellers and current homeowners still have an advantage in this game of tug-of-war,” Terrazas said.
The Zillow economist does see things swinging more quickly toward buyers in the L.A. area than elsewhere in the nation. And price gains are slowing as the vise grip sellers have had loosens.

I have seen this game before. As more people flee the state, as more people seek to offload their homes, expect more price drops.

The S&P CoreLogic Case-Shiller index is a better gauge of price trajectory because it accounts for differences in the types of homes selling in a given month. In September, the latest month available, the index revealed prices in L.A. and Orange counties rose 5.5% from a year earlier. That rate has declined each month since reaching a recent peak of 8.2% in April. In San Diego County, price gains eased from 7.7% to 4% during the same period. 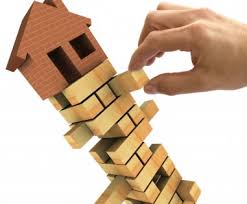 It's more than a slow rise in prices, however. Sales for homes have dropped considerably. One property in West Carson dropped by $50,000. More price reductions are on the way. Besides home sales, "For Rent" signs are popping up all over the South Bay and throughout the Los Angeles area. People simply will not pay the massive rental and lease demands. Who is going to drop $2,400 a month for a one-bedroom apartment?

Another friend of mine moved for Kansas. He went from paying $2,400 a month for two bedroom to paying $600 a month for house and a large yard for his family. It's not rocket science for many people.

Many economists doubt prices will decline on a year-over-year basis, absent a recession. Others disagree, arguing prices are simply out of whack with incomes.

There is a recession coming, certainly in states which are stepping up policies to slow growth and stagnate the economy with higher taxes, fees, and regulatory burdens.

The slowdown doesn’t just apply to California. Buyers nationally are adjusting to mortgage rates that are nearly one percentage point higher than a year earlier as the Federal Reserve raises interest rates to head off inflation.

How about that? It's starting to cost money to borrow money once again. This kind of economic policy is essential to ensure that individuals and corporations are not over-extending their borrowing power.

On Thursday, the National Assn. of Realtors said that, on a seasonally adjusted basis, buyers entered contracts to buy nearly 3% fewer homes in October than in September. Compared with a year earlier, contract signings fell 6.7% — the tenth straight decline.

Those declines will continue if sellers think that they can ask for whatever they want from whomever. The laws of supply and demand do not go away, no matter how left-wing, no matter how statist, no matter who socialist the political class or clout in a state.

In response to that report, Mike Fratantoni, chief economist for the Mortgage Bankers Assn., called the current slowdown a “healthy deceleration in the market.”

“Home prices had galloped ahead of wage growth for too long, particularly in the coastal markets,” he said in a statement.

There was a time when I had dreamed of owning my own home. Or would it really be a dream?

The costs of owning a home go beyond the purchase of the house, the property, and other real estate. There's also the property taxes, the maintenance, the insurance. There are more costs associated with property than most realize.

Is it really worth it?

At this point, especially in California, no, it isn't--and the cooling off of the housing market brings that out clearly.