Sorry, LGBT, You are NOT Born That Way, So Stop Stealing the Civil Rights Movement

The jig is up.

The LGBT Hate Machine has played up this lie for decades, claiming that they were "Born That Way", and therefore all of us have to accomodate their sexual perversions, er "preferences".

The research is slowly but steadily catching up with common sense.

It's time for us to stop enabling and promoting anti-biological hate!

Here's the full report from Peter Spriggs of the Family Research Council: 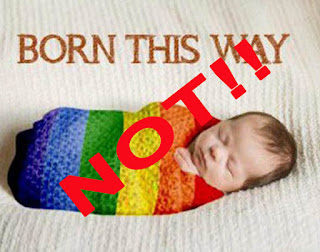 In 2008, the Advocate, the leading LGBT news magazine in the U.S., ran a cover that starkly declared, in all capital letters, “GAY IS THE NEW BLACK.” It was a dramatic illustration of an assertion (explicit or implicit) that has been at the heart of the LGBT rights movement—the idea that “sexual orientation” is “immutable,” or incapable of change.

Now, the left is pushing for a bill that would declare “gay is the new black” in even more direct terms. On April 2, the House Judiciary Committee held a hearing on the “Equality Act”—better termed the “Inequality Act”—a piece of legislation masquerading as a civil rights protection that would actually increase inequality and harm women and children. This bill has been introduced before, but has new life because of the Democratic majority in the U.S. House. It would amend virtually every area of federal civil rights law to include “sexual orientation” and “gender identity,” not only in the area of employment, but also public accommodations, housing, credit, and a raft of other areas.

The Equality Act would begin by amending the granddaddy non-discrimination law of them all—the Civil Rights Act of 1964. This was the law passed at the height of the African-American civil rights movement of the 1960’s in order to break the back of the pervasive Jim Crow racial segregation laws in the deep South. Without much debate, Congress also prohibited discrimination based on “sex.” What both race and sex have in common is that they are inborn, involuntary, immutable, innocuous—and in the U.S. Constitution. None of these criteria apply to “sexual orientation” (or “gender identity”). Yet the Equality Act would add these “categories” to federal law nonetheless.

This bill is based in part on the idea that any laws or practices which in any way disadvantage those who engage in homosexual conduct—from restricting their military service to defining marriage as the union of a man and a woman to allowing religious schools not to hire or admit them—are inherently unjust because a person’s sexual orientation (like their race) is fixed at (or before) birth and can never change.

In the 2015 Supreme Court decision which redefined marriage to include same-sex couples (Obergefell v. Hodges), Justice Anthony Kennedy was explicit in declaring that his opinion rested on this premise. “Only in more recent years have psychiatrists and others recognized that sexual orientation is . . . immutable,” Kennedy declared. Marriage is a “fundamental right,” and the petitioners’ “immutable nature dictates that same-sex marriage is their only real path to this profound commitment.”

Yet there is only one problem about this immutability argument; the science shows it simply isn’t true! In Evidence Shows Sexual Orientation Can Change: Debunking the Myth of “Immutability,” I report on academic studies over the last two decades based on four large data sets drawn from surveys about sexuality. These studies are both “population-based” (representative of the population as a whole) and “longitudinal” (meaning they survey the same individuals at intervals years apart, allowing us to measure change over time).

The truth is, “sexual orientation” is a multi-faceted concept, involving a combination of attractions, behaviors, and personal identity. These four studies all demonstrate that significant change in each of the elements of sexual orientation is possible. The percentage changing from homosexuality to heterosexuality ranged from 13% to 53% (while the percentage changing from heterosexuality to homosexuality ranged only from 1% to 12%). In one survey of “same-sex attracted respondents,” up to 38% of men and 53% of women “changed to heterosexuality” in only a six-year period.

Confirmation of this has come from a surprising source. Scholar Lisa Diamond (who herself identifies as a lesbian) has long studied and written about the “sexual fluidity” of women. In a 2016 article with her colleague Clifford Rosky, she declared, “Given the consistency of these findings, it is not scientifically accurate to describe same-sex sexual orientation as a uniformly immutable trait.”

In light of this evidence, the public would be wise to question whether the efforts of the LGBT movement to ride on the coat-tails of “civil rights” can any longer be justified. Indeed, the science shows that the evidence for immutability—on which many have relied to argue for such legislation—simply isn’t there. If Congress truly wants to pursue “evidence-based” policy, it will reject the “Equality Act” and its deceptive premise.

Peter Sprigg is a Senior Fellow for Policy Studies at the Family Research Council.
Posted by Arthur Christopher Schaper at 9:14 AM