Pete Buttigieg is Wrong About Homosexuality! By Don Boys, Ph.D.

Pete Buttigieg is Wrong About Homosexuality!
Don Boys, Ph.D.
http://donboys.cstnews.com/pete-buttigieg-is-wrong-about-homosexuality
Mayor Pete Buttigieg, the media, and academia are all fouled up about what perversion is!  Since the mayor is an admitted homosexual with a “husband” no less, he obviously feels he must justify his choice of walking in the dark world of perversion.  And make no mistake, homosexuality is perversion.  If not, then all religions and denominations down through the ages have been wrong.
A serious person will not try to overturn civilization’s morals, manners, and mores of thousands of years without very thoughtful consideration.
Evidently, Pete cannot be trusted to make decisions since he chose a degrading, dangerous, even deadly lifestyle.  Such a person should not be in charge of the national budget, foreign policy, or have his finger on the button.
People who are soft on perversion don’t know the difference between right and wrong, up and down, black and white, good and bad, or normal and abnormal.  The Hebrew prophet Amos commanded us to “Hate the evil and love the good.” (We are commanded to hate evil but never persons.)  However, most people relegate Amos to the ash heap and suggest that what is evil for one person may be good for another.  Afraid not.  While there can be some honest disagreement about some things, when God speaks about an issue, that settles it. God has spoken clearly about perversion.  And that settles it!
Most homosexuals, rather than deal with our objections and criticisms, resort to the embarrassing and humiliating ploy of screaming, “hate,” “bigotry,” and “intolerance.”  That is much easier than speaking to the real issue. Even if some “traditional marriage” proponents are haters, that does not mean homosexuality is right and good for society.
Pete has aggressively gone after Vice President Pence because Pence believes in “traditional marriage.”  I wonder how he would respond if Pence said, “I believe in the biblical truth that homosexuality is perversion and is an abomination to God and man.”  You see, that is exactly what Pence and others are really saying when they speak of “traditional marriage” and that is more pleasant to hear. 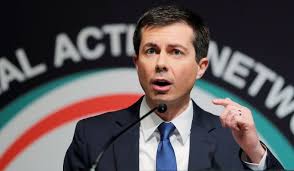 
Don’t bet the farm on it.
Posted by Arthur Christopher Schaper at 8:54 AM