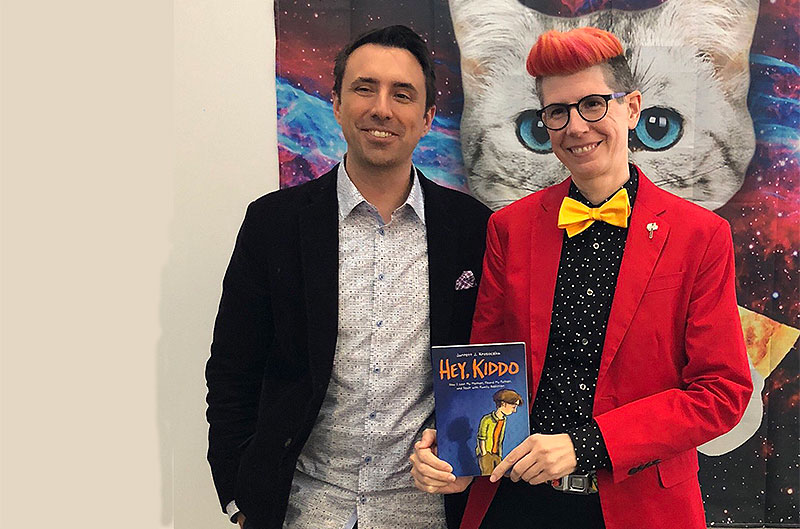 Baird Middle School librarian Jordan Funke (right) poses with one of the library books and the book's author at a school event.

Most people can’t imagine what efforts school officials and activist staff will make to protect the sexuality/LGBT agenda – and how they seek to impose a climate of fear within the school against everyone who disagrees. What happened in this middle school is representative of what is happening across the country.

A teacher raises an alarm

In Part 2 we described how Bonnie, a social studies teacher at Baird Middle School in Ludlow, MA, became alarmed that pornographic, homosexual, and transgender themed books were in the school library, and were being brought into classrooms for children to read. This was apparently arranged by the “transgender” librarian (a weird woman who dressed as a man).

Bonnie met with the Principal, who refused to deal with it. So on Nov. 18, 2019 (as we described in Part 3) Bonnie delivered a detailed letter to the Superintendent that was signed by 18 other Baird teachers who shared her concern. The letter strongly requested that those harmful books not be made available to the children. But the Superintendent was unconcerned. Instead, he told them they must go through a formal “process” if they wanted any books removed.

On January 20, 2020 (as we described in Part 4) Bonnie submitted the paperwork to go through the bureaucratic process for removal of one of the particularly egregious books. A biased committee appointed by the Superintendent subsequently ruled that the book was “age-appropriate for middle school students.”

But Bonnie was clearly upsetting the power structure in the Ludlow schools. Teachers aren’t supposed to go against that agenda. One week after Bonnie submitted the paperwork to remove the book, the retribution against her began.

On January 27, 2020, the cross-dressing Baird Middle School librarian, Jordan Funke, filed a formal “harassment, bullying, discrimination, and hate crimes” complaint against Bonnie. In today’s political climate, this is considered a serious charge. Like most other school systems, Ludlow has a fairly comprehensive district policy covering these issues.

But Funke’s complaint against Bonnie is a bit vague:

Bonnie has been spreading lies about me and accusing me of sexually exploiting students. I believe this is libel, defamation, and harassment based in part on her perception of my sexual orientation and gender identity.

There were no dates, times, or specific incidents listed.

Funke also writes in the complaint: “Administration tried to direct [Bonnie’s] complaints [about the books] through official channels, which she has not done.” This, of course, is untrue. For one of the books, Bonnie had done exactly what the Superintendent had directed her to do regarding the “process.” (If done properly, the process was purposefully too cumbersome to do for all the books.)

Funke names four people as “witnesses” to Bonnie’s transgressions: The Superintendent and three people who were on the Superintendent’s “book” committee - the Baird Principal, and two left-wing Baird teachers.

From Funke's "harassment" complaint against Bonnie.

Two weeks later, on February 13, 2020, Bonnie received a letter officially notifying her that there is a formal “Harassment, Bullying, Discrimination, and Hate Crimes” complaint against her.

Bonnie was instructed to come to the office of the Director of Curriculum and Instruction to discuss the complaint. She was told she could bring union representation and/or an attorney.

At the meeting: The “harassment” charge completely falls apart!

The meeting took place on February 24, 2020. It included five people: (1) the Director of Curriculum and Instruction, (2) the legal counsel for the Ludlow Public Schools, (3) Bonnie, (4) a local attorney who came to Bonnie’s aid, and (5) a teachers’ union field representative there on Bonnie’s behalf. The accuser, Jordan Funke, was not at the meeting.

(The teacher’s union field representative was from a different district – because the one in Bonnie’s district supports Jordan Funke, Bonnie was told!)

In the meeting, they offered no written evidence or anything formal against Bonnie. They just made vague statements that she didn’t like the librarian.

Bonnie said to them, “You’re accusing me of ‘not liking’ the librarian. Well, I don’t like these books. I’m not hiding that. I wrote a letter detailing it.”

They tried to use the letter that Bonnie delivered to the Superintendent, also signed by 18 other teachers, as “evidence” against her. It turns out that Funke’s statement about Bonnie “accusing me of sexually exploiting students” came from that letter. The letter said:

We all share these concerns for the known psychological and mental damage that these sexually explicit and pornographic materials can cause students at the middle school developmental level, which ages range from eleven to thirteen.

We need to address the materials being provided, as it is an egregious negligence on the part of our librarian to encourage the very behaviors we are trying to discourage and guide away from… These students are minors and we are there to protect them from sexual exploitation.

Bonnie didn’t back down from that. She said that whatever the choice of words, what’s happening is wrong: The school shouldn’t be guiding their sexuality.

Bonnie’s lawyer asked about the “witnesses” listed in the harassment complaint, including the Superintendent, Principal, and teachers. “What did they actually witness?” he wanted to know. Nobody could answer that.

All in all, they couldn’t bring up anything significant against Bonnie.

An update – then nothing!

On March 9, 2020, Bonnie received the following email from the Director of Curriculum and Instruction:

I wanted to update you on the Informal Review process and proposed Resolution Agreement. Currently, we are still in process relative to a resolution. We hope to have more information by the end of this week or at the beginning of next week. We will continue to keep you informed.

Bonnie never heard anything again on this matter. Obviously, they realized that they had no case against her, and very quietly dropped it.

I know what they were doing. This was about intimidation. They were trying to quiet me down because I was OPENLY talking against it – and with other teachers – and I put it in writing. So they labeled me “hateful.”

That’s what school officials are doing everywhere – because it usually works. But it didn’t work this time.

Parents in Ludlow are incredibly grateful to Bonnie for fearlessly standing up and not being intimidated. And this story is far from over. Our next report will describe how the American Library Association got involved – against the parents!