If You Recall Them, They Will Resign

CARLSBAD — Carlsbad City Councilwoman Cori Schumacher, whose opponents say they have enough signatures to place her recall on the ballot, announced her resignation Friday morning. It was effective immediately. 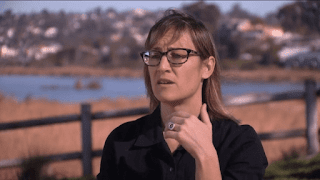 She ran away. GOOD!

“I have chosen to attend a university outside the county of San Diego,” Schumacher said in response to emailed questions about her decision. “It’s an opportunity I simply cannot refuse. Unfortunately, this means that I am no longer able to continue my role as council member.”

Schumacher declined to answer questions about the recall or about her continuing conflicts with a few vocal residents and conservative elected officials. Instead, she emphasized the City Council’s accomplishments since she was first elected in 2016, including the launch of a Clean Energy Alliance, the city’s first lifeguard program, and an expanded homeless response program.

Proponents of the recall needed about 3,700 signatures to force the election and had collected more than enough when she resigned, said Carl DeMaio, a former San Diego City Council member and chairman of the political group Reform California that launched the effort.

“Today is a big win for the citizens of Carlsbad and removes a toxic presence from Carlsbad city government,” DeMaio said in a news release.

“Schumacher and her special interest political backers had the same polling we had and they knew they could not survive this recall election, so they smartly opted to throw in the towel just days before we were expected to submit our signatures,” he said. “As of our campaign’s last count, our team of grassroots volunteers had collected nearly 4,500 signatures and we were just gathering extra signatures for a safety margin.”

One of the reasons for the recall effort was Schumacher’s decision to file restraining orders against three Carlsbad residents, one of whom has since moved away, who frequently criticize her council actions in social media and at public meetings. A judge dismissed her complaints and order her to pay court costs.

Her critics also took aim at her efforts to have the city strictly enforce COVID-19 public safety protocols, which some elected officials said were unnecessarily harming small businesses. Another criticism was her support for regional efforts to expand public transportation systems.

“The outcome of our recall campaign should send a clear message to other local politicians that they will be held accountable for their misconduct in office and for their extreme positions on important issues,” DeMaio said.

Schumacher was elected to a four-year, at-large City Council seat in 2016. She ran unsuccessfully for mayor in 2018, which was the first year the city held an election for the newly created council District 1 in which she lives.

Barbara Hamilton won the District 1 seat, and as a result Schumacher would have been ineligible to run for re-election in 2020 in the district where she lives. However, Hamilton resigned early in the first year of her term, and Schumacher won a special election held to fill the vacancy.

Now, with a little over one year left in the District 1 term, the council could hold another special election or appoint someone to the new vacancy.

Posted by Arthur Christopher Schaper at 9:34 AM