I am so glad that the Los Angeles Police Officers on site took away the large stick from the trans activist.

They have no right to flout the rules and threaten people's lives, safety, and well-being.

I do appreciate that they walked on the flag. It is a terrible symbol which should be hidden away, no longer promoted: 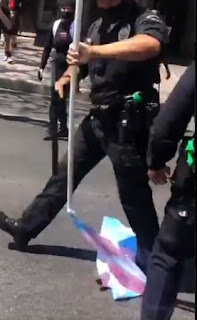 Of course, the LGBT activists want to play victim and make the story all about how the police officer trashed the trans flag.

People want to say this wasn’t a demonstration about transgender rights? Here’s @LAPDHQ, after defending transphobes, destroying a transgender flag.

Anybody who reports on Wi Spa without mentioning the transphobia at play by the far right & LAPD are disingenuous. 🎥caropej (IG) pic.twitter.com/1BzVYRQvb7

I wish that more people would do that on their own.

If I could put it together, I would put together a day in which Americans across the country burn the LGBT flag and denounce LGBT supremacy once and for all.

Posted by Arthur Christopher Schaper at 10:33 AM