MassResistance, the international pro-family group that makes the difference, has been shutting down Drag Queen Story Hour (DQSH) programs all over the United States, starting last year in Atlanta, Georgia.

Our activists received word of another Drag Queen Story Hour, this time Morgantown, West Virginia. For the last six months, MassResistance has been working with pro-family contacts who have wanted to stop the spread of this corrupt LGBT agenda, which has been targeting children far more heavily. MassResistance got to work getting the word out to stop this Drag Queen Story Hour in Morgantown, West Virginia.

The Drag Queen Story Hour program was scheduled to take place in November 16, 2019. However, Following repeated phone calls, emails, and social media protests from our activists and other allies against the program, the Morgantown Library rightfully cancelled the program.

Despite the cancellation of the drag queen program, serious questions have remained unanswered. MassResistance filed a number of FOIA (Freedom of Information Act) requests with the Morgantown Library. In some of the email communications between the DQSH organizers and the library regarding the planned DQSH, the librarian Sarah Palfrey indicated that the program was cancelled due to supposed “death threats” issued to the library and to the performers. However, no record detailed the actual threats. What were those supposed threats? The media simply quoted the librarian that there had indeed been death threats, but there is no evidence of those threats to this day.
Another FOIA request, conducted by our Texas MassResistance director Tracy Shannon, turned up the actual police reports filed to the Morgantown, West Virginia police department. The two performers, Paul Liller and Michael Sinnett, filed these complaints. One of their remarks in the police report is distinctly odd: “[Paul] Liller advised that he did not want an investigation completed at this time, but wanted the incident documented.”

“This is really strange,” says Arthur Schaper, Organization Director for MassResistance. “If the Drag Queen performers were so worried about these death threats, then why would they file a report, but not seek an investigation?”

In addition to these specious claims of death threats, one of the local community leaders who protested the Drag Queen Story Hour, Cindy Frich, was actually the victim of a number of threats from comments on her own social media profiles. LGBT Activists even doxxed her, i.e. they posted her home address to the public hoping to cause her harm. They also posted screen shots of comments made on Facebook with the image of Ms. Frich, making her a target. Last of all, the librarian reinforced the misinformation by stating death threats were made by Ms. Frich, when nothing of the sort happened.

“The hypocrisy from the LGBT activists is simply stunning,” Schaper added. “They make unfounded claims about death threats, but Ms. Frich was actually placed in considerable danger. Also, the county prosecutor said there was not sufficient evidence to move forward with charges of making threats to the drag queens themselves.” 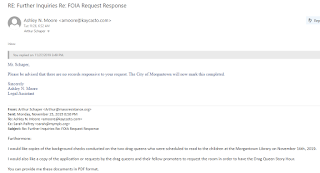 Following further FOIA requests to the Morgantown Library, it became evident that the library did not even conduct background checks on the Drag performers. This is truly alarming because one of them, Paul Liller, took a plea to theft charges a few years back. 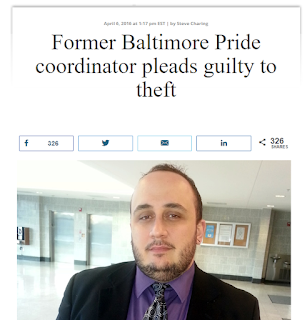 Just as leaders from the Gay, Lesbian, Bisexual and Transgender Community Center of Baltimore and Central Maryland (GLCCB) are gearing up to host Pride 2016, the 2015 Pride Coordinator, Paul Liller, accepted a plea deal in a case in which he had been accused of theft by GLCCB’s board president Jabari Lyles.
Following three postponements that began in Baltimore’s District Court last December, Liller signed an Alford plea agreement in Baltimore Circuit Court on March 30. He pled guilty to a misdemeanor (Theft — less than $1,000 value) without admitting guilt and maintaining his innocence but admitting that the prosecution could likely prove the charge based on the evidence.

Schaper continued: “That anyone can call this man—or any adult performer—a ‘role model’ shows a complete lack of respect for children or common decency. It’s sickening!”

MassResistance also researched the social media profiles of the two drag queens scheduled to read at the Morgantown Library. The contents on their social media feeds are sexually explicit, and further demonstrate that Drag entertainers of any kind are not for children, nor should such performers be around children. Click here to see what MassResistance found out about Paul Liller and Michael Sinnett.

Tracy Shannon of Texas MassResistance shared her thoughts: “Sadly, this is not surprising. Libraries seem more interested in pushing an ideology than protecting children.”   In recent months the Texas MassResistance team found that two Drag Queens in a Houston public library were convicted child molesters. A third Drag Queen was convicted for male prostitution. Other Drag Queens around the country have similarly disturbing backgrounds, including the ones that wanted to read to children at the Morgantown Public Library.

MassResistance is urging the West Virginia State Legislature to take action to ensure that adult entertainers are not around children in any public setting, including libraries and public schools. MassResistance is also calling on local stakeholders and community leaders to contact us if elected officials at the local or state level are attempting to push the LGBT agenda further onto children and violate parental rights in the process.

Furthermore, MassResistance demands that the Morgantown library issue a public apology to Ms. Frich and the community at large as it put Ms. Frich’s life in danger and stirred division in the community.