A pro-family contact got in touch with me following our victory in getting the Hong Kong Gay Pride parade cancelled this past weekend.

Sadly, Hong Kong still permitted a pro-gay assembly. Thankfully, it was poorly attended, with about 1,000 people showing up. It was very bad, too--not just morally, but artistically (More on that later).

My contact was surprised to learn that the pro-LGBT lobby is working hand-in-hand with the pro-democracy movement and protesters.

I showed him a few articles, but let me outline for everyone that the young face of the Hong Kong Pro-Democracy movement openly embraced the LGBT Agenda.

Time Magazine wrote a horrific article promoting this young activist, while denigrating his father, who is the most vocal and well-connected pro-family activist in Hong Kong. 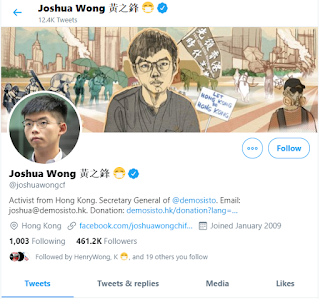 As early as 2016, Time Magazine published the following about Joshua Wong:

"Homophobic" has turned into a nonsensical smear. Such a headline shows how far Time Magazine has fallen in terms of journalistic quality. Of course, the lack of ideological rigor displayed by Joshua Wong and fellow democracy activists is even more disconcerting.


The 20-year-old poster boy of Hong Kong democracy, Joshua Wong, has distanced himself from his father Roger Wong, who has launched an online campaign against an initiative ... to promote awareness of LGBT rights.

The younger Wong became a leader of the 2014 Hong Kong democracy protests, known as the Umbrella Revolution, when he was just shy of his 18th birthday, appearing on the cover of TIME. He has since become a globe-trotting activist, meeting members of U.S. Congress and rallying Asia’s youth to demand more democratic governance.

How can anyone seek democratic governance when bowing to an autocratic agenda, i.e. the LGBT Lobby?

He is also the founder of a socially progressive political party, Demosistō, which on its website calls for passage of an antidiscrimination law, recognition of same-sex unions and legal protections for transgender people. The party has pushed for Hong Kong to enact a law called the Sexual Orientation Discrimination Ordinance (SODO), which, if passed, would be a milestone for the semiautonomous Chinese city, as it presently offers no explicit protections for sexual minorities.

Same-sex unions, Legal protections of transgenderism, and a non-discrimination ordinance for so-called sexual minorities. This is pretty disturbing stuff. In fact, the Democratic Majority pushed a similar set of policies in the "Equality Act", which would have gutted the Civil Rights Act of 1964, turning destructive behaviors into protected classes. The clash between individual liberties and religious sentiment against LGBT propaganda would have been harsh and detrimental to ... the general citizenry which value freedom of speech, religion, assembly, and all the rest.

Demosistō aims to achieve democratic self-determination in Hong Kong. Through direct action, popular referenda, and non-violent means, we push for the city’s political and economic autonomy from the oppression of the Communist Party of China (CPC) and capitalist hegemony.

Notice how they not only want to deal with communistic oppression, but "capitalist hegemony."

How can this group oppose communist China, but basically embrace the same follies that "Too few have too much money"? That is the pretext for the statement "capitalist hegemony". In fact, capitalist hegemony is a Marxist term!

Right away, we see a pro-democracy movement which is really another form of communism, or socialism, or ultimately collectivism.

And it gets worse.

“Me personally, I support this,” Joshua Wong tells TIME.

Joshua supports the LGBT Movement and the LGBT Agenda. He believes that sexual deviance should be treated as a civil right. Whether anyone wishes to accept this or not, the whole LGBT Identity is another form of Marxism, cultural Marxism, and nothing more.

Consider his alliance with the pro-LGBT Russian punk bad, which has been causing all kinds of unnecessary, immoral uproars in their own country:


LGBT rights? Really? Has Joshua Wong been paying attention to what has happened to law-abiding citizens in the United Kingdom, Canada, and even some parts of the United States?

How can Joshua claim to support freedom, democracy, and the undermining of communism, while pushing the cultural Marxist folly of LGBT privileges?

Here's another article showcasing Joshua's support for sexual perversion, especially in conflict with his pro-family father:


Activist Joshua Wong expressed his support for the legislation of a sexual orientation discrimination law on Wednesday after his father spoke out against LGBTQ equality in a magazine interview.

Wong’s father, Roger Wong, is the convenor of the anti-gay Family School Sexual Orientation Discrimination Ordinance Concern Group. He was profiled by Next Magazine on Wednesday, speaking against the introduction of protections for the LGBTQ community.

Joshua doubled down on this immoral insanity:

Joshua Wong responded in a Wednesday evening Facebook post, which cited and shared the magazine article: “I support LGBTQ equality, and I support the legislation of a Sexual Orientation Discrimination Ordinance. I understand very clearly what law is being discussed. It is not up to other people to judge whether I have understood it or thought it through,” Wong wrote.

Joshua's push for LGBT equality means that he wants inequality for everyone else in Hong Kong, it's as simple as that. The LGBT Lobby has never ceased in its demands for more rights, more recognition, more privileges. The whole agenda is rooted in the tyranny of the minority, as they are a tightly-knit political force which has never shied away from a fight to push their special rights. Those who do not kowtow to LGBT face shame, recrimination, termination from employment, even civil and criminal penalities. This is not democracy. This is not freedom. This is evil. 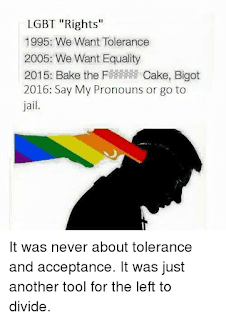 Consider the ominous warning of British Historian, himself a young radical in his earlier days much like Joshua Wong today:

"Decriminalisation made it possible for homosexuals to organise openly into a powerful lobby, and it thus became a mere platform from which further demands were launched. Next followed demands for equality, in which homosexuality was officially placed on the same moral level as standard forms of sexuality, and dismissal of identified homosexuals from sensitive positions, for instance in schools, children’s homes, etc., became progressively more difficult.

This was followed in turn by demands not merely for equality but privilege: the appointment, for instance, of homosexual quotas in local government, the excision from school textbooks and curricula, and university courses, passages or books or authors they found objectionable, special rights to proselytise, and not least the privilege of special programmes to put forward their views – including the elimination of the remaining legal constraints – on radio and television.:

Rights for homosexuals and transgenders inevitably tramples on the natural rights of all. Creating special rights by state force is just another form of communism, nothing more.

It's really sad to see a budding democracy movement bend over to another tyrannical lobby. Joshua Wong chose poorly, most likely because he wanted to tap into the latent, prevalent militancy of the homosexual-transgender lobby in Hong Kong.

This alliance has cost the region dearly, and what Hong Kongers will end up with is more communism, more tyranny, less liberty, no matter what the outcome may be. Whether they succeed in getting their Five Demands, or the Beijing Mainland government comes down hard on Hong Kong, cultural and/or political Marxism is expected to have an extended say in the daily affairs of the Island nation. Indeed, what Marxist folly! 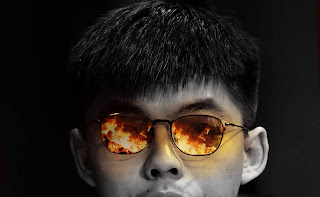 Posted by Arthur Christopher Schaper at 11:33 AM