I was so pleased to find Denise McAllister's Twitter feed promoted on my feed--at last.

Denise may have deleted the tweet, and perhaps the comments were a little crude.

But so what? Sometimes, speaking the truth makes us a little rough around the edges.

Here's the tweet that set off so many conservatives, as quoted by Yashar Ali, the gay, Catholic Iranian journalist (whatever):

I was bullied for being Iranian as a kid. But I never felt ashamed of my ethnicity. I came out on 8/17/2001 & while it hasn’t always been easy, I have always been proud of who I am. I’m Iranian, gay, and Catholic. Perhaps an odd combo, but I wouldn’t change who I am for the world pic.twitter.com/xGPzoDzM13
— Yashar Ali 🐘 (@yashar) March 31, 2019


Let's not forget, however, that Ali had also attacked Denise's relationship with her husband:


I have defensed masculinity & have been ridiculed for it. Maligned for loving my husband as a man & celebrating my role as a woman. Yet I’m the devil in the eyes of many. I criticize a gay man who dares to mock my relationship. And I’m the devil. You do see how fucked up this is
— Denise McAllister (@McAllisterDen) March 31, 2019


She later commented the following about Yashar Ali: 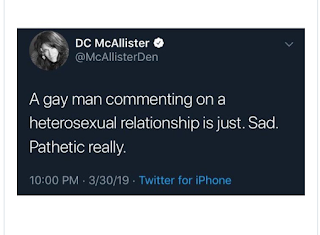 Indeed, it is. Homosexuals need to get help. There is no need for them to live in bondage to a lie.

And then finally she related that she had been fired by "The Federalist":


I was fired when I criticized a gay man who mocked my heterosexual relationship. Yet no one defended me when I stood for masculinity and God’s design for sexuality despite outlets saying they represent Judeo-Christian values about sexuality, identity and purpose. What is truth?
— Denise McAllister (@McAllisterDen) March 31, 2019


For speaking for men, for masculinity, for marriage, and for calling out homosexual perversion for what it is, she should have been applauded and encouraged.

No man can find love in another man's anus. It's just not possible. A man's anus is not the place or means for communicating conjugal love. It's just that simple.

Where McAllister's comments a little crude. Sure. I would have avoided the curse words. It's not really necessary. But that does not obfuscate the larger points which she was making:

Instead, she was fired.

Well, Denise finally revealed to the public what happened, and particularly what happened in connection with Ben Shapiro, the Editor-In-Chief of the Daily Wire:


I’m posting my conversation with Ben Shapiro from the night he fired me. It’s important to do this since time has passed, people have had a chance to understand the context of my tweet and know more about what Conservative Inc really represents. Here are the screenshots 2/6 pic.twitter.com/c05IUDRPTz
— Denise McAllister (@McAllisterDen) November 23, 2019

Indeed, Conservative Inc. is not conserving anything.

In fact, why are we calling ourselves "conservatives" in the first place? I am a constitutionalist, a republican, and above a child of God who believes the Gospel!

"We don't want our brand linked to the kind of gross attack you dropped on Yashar Ali today."

"He [Yashar Ali] is not linked to our brand. You are. Please remove our brand."

Whose brand is that? It's more than just Ben's.

Then he chides Denise:

"You accused him [Yashar Ali] of finding meaning in another man's asshole. That's self explanatory beyond all boundaries of decency. Please remove us."

Yes, I apologized. The video I attached was my podcast explaining my anger and grief. This apology was the next day after I had been deluged with hate by literally millions and my friends at the Federalist fired me.

One contributor writes something negative, off-color, heated, and

But the larger issue is that Denise McAllister called out homosexuality for what it is: a perversion. People have shared bad ideas, inappropriate remarks, even off-color statements on Twitter, Facebook, or other platforms without any real risk to the brands or programs that they work for.

But if someone crosses Big Homo or Big Tranny, everyone loses their minds! If you speak out against homosexuality or transgenderism, you are denigrated, decimated, and dismissed from the public sphere.

This tyranny is unacceptable. We should have the liberty to speak our minds, to speak freely, And printing groups, newsites, and other information organizations should not cut people because they misspeak once in a while.

For the Federalist and the Daily Wire to cave to the threatened labelings of "homophobe" or "transphobe" is just outrageous.

Denise McAllister should not have been summarily dismissed for calling out homosexuality for what it is: a destructive perversion. Instead, Conservative Inc. typermasters at the Daily Wire and the Federalist chose to cave rather than stand their ground. Sad. Sad indeed.

Posted by Arthur Christopher Schaper at 9:04 AM