The Liberal Press Rebelled Against Reality - and Lost

The New York Times featured another article about the slow of the liberal print media. Their featured corpse was The Denver Post, and the headline read: “Denver Post Rebels Against Its Hedge-Fund Ownership.” On the cover of the The Denver Post’s latest Sunday edition, the headline photo features a crowd of the Colorado staff, most of whom are hollowed away in silhouettes. The shadowy gaps are supposed to elicit pity from the readers about the recent, drastic cuts to the newspaper. Joining the photo, articles from the staffers themselves denounced the massive cuts. Instead of pleading for their jobs, however, the writers were demanding that the paper’s hedge fund owners either fight to keep the paper alive, or sell the paper to someone who wants to keep it alive. 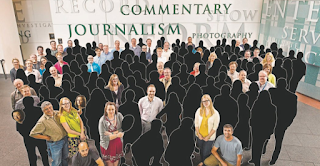 When I read this, I had to laugh. These journalists think of themselves as the avant-garde of some new political resistance. Since when do the workers in any profession get to unilaterally demand the employer/owner’s decisions and dictates? Have they forgotten that newspapers are a product and a service, both which must respond to public taste and the marketplace?

They haven’t necessarily forgotten it—they just choose not to believe it. Like much of the reporting from the liberal press over the last sixty years, today’s corporate journalists—if they can be called that still, with all the propagandizing and editorialized narrative-baiting—are still committed to a vision of how the world should work rather than how it actually works.

Famed conservative comic and pundit Evan Sayet discussed this self-delusion in a signature speech about Modern Liberals’ thought process (yes, they have one in a very limited sense). He went to greater length about the liberal media in another speech. Both talks educated me about what has been happening to print journalism, why they are failing, and why they fail to understand why they are failing.

For the last three generations, college students have learned that the most important value is acceptance, or what Sayet called “indiscriminateness”. To overcome the evils of the world, one must stop recognizing any standard of good and evil. To point out differences between good and bad is tantamount to conflict-inducing bigotry. Surprisingly enough, this pernicious ideology entered Western thought starting with the hopelessly Romantic, anti-intellectual Jean-Jacques Rousseau. His radical ideas were dismissed in his day, since people had to rely on common sense just to get by. However, the incredible wealth and prosperity of the Western World post-World War II has enabled college students to consider and pursue Rousseau’s backward views without immediate hurt.

College journalism majors have been taught that advocacy, not objectivity, is the mainstay of their profession. These journalism students are specifically taught that they need to report on the sorrows of the downtrodden, represent the world as a fundamentally unfair place defined by poverty, disease, death; and that injustice cannot be vanquished but by rejecting traditional standards of morality.

This mindset gave us a media which downplayed success, evil, and truth. The Killing Fields of Pol Pot, along with the mass genocide of other dictators, were reported as mere murders (read How Democracies Perish for more information). Journalists deliberately misreported the Tet Offensive in Vietnam, which was actually a crushing victory for the United States. The media were shocked at the collapse of the Soviet Union, and puzzled that the United States--the greatest country on earth because of its commitments to God, liberty, and E Pluribus Unum—survived and thrived.

Their latest major fail? Foreseeing the election of Hillary Clinton, when Donald Trump not only stomped all over her, but won the working-class voters who actually endure the day-to-day rough-and-tumble realities of life, frustrated by depressed wages, unsafe streets, and rampant mass migration. The press missed these trends because they reject objective standards but remained committed to their Rousseauian, utopian worldview. 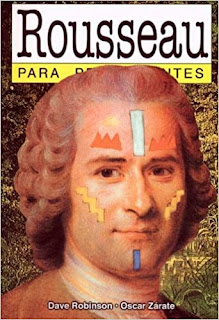 Even today, consider the incessant focus of the diminishing liberal print press on the plight of illegal aliens instead of American citizens. Americans for the last thirty years have complained about this relentless problem, whose consequences include cheap wages for foreigners who have broken into our country, who have decimated the life and culture of our country. The modern, liberal press has obsessed over on transgenderism, climate alarmism, with relentless attacks on free markets and the sharing economy. They publish fawning articles about politicians who profit off identity politics and promise more money for local governments, who in turn require businesses to print notices and fictitious business licenses in the newspapers.

What’s worse, the liberal media has missed emerging political and cultural currents, but they didn’t care, just as they ignore the stark realities of competition in the marketplace. Nevertheless, competitive media outlets began reporting objectively, and about the issues that everyday readers care about. By the way, I found the Times article not on its main website, but on Drudge Report. Since the late 1990s, when Matt Drudge began featuring key articles from news sources around the world, he initiated the long demise of mainstream, traditional left-wing journalism. For the first time, on a daily basis, an independent source was providing a clear cross-current of news all over, and at the same time exposing its conflicts and contradictions to the reading world at large. Finally, there was one source willing to provide real journalistic diversity, rather than the monomaniacal obsession with the progressive world view. 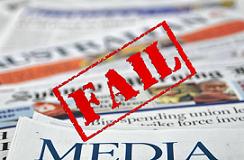 Ironically, the journalism class like the Denver Post are rebelling against the wrong people. Their rebellion against reality, and the moral standards which emerge from these realities, contributed to their downfall. The mainstream media needed the very readers whom they repeatedly disdained. Those readers have now found a better. Like the public during Rousseau’s time, working people today don’t buy into the progressive idealism of “no standards, no right or wrong.” Even worse, they have endured the brunt of progressives’ misguided, destructive idealism—the same worldview championed by The Denver Post—and now they’re the ones rebelling, and rightly so.