The 4 Way Meat Market in Oxnard has advertised itself as a "Sanctuary" for illegal aliens.

Do these private businesses not understand that they have a mandate to comply with federal law? They do not get to let in illegal aliens, then turn around and defy the federal government and federal auditors.

The meat market learned the hard way, and they had to allow for ICE officials to conduct the audit as needed.

The Ventura County Star reported the business owner in a favorable light, as expected, but taxpayers in the area need to push back as hard as they can against this.

It wasn’t a raid. It was an audit.

Why are witnesses afraid? Don't they realize that if they are in the country legally, they have nothing to worry about.

And yet ... there is so much fear. Why? They are illegal aliens! They should be afraid, then!

Customers called the Oxnard store and asked if it was true that Immigration and Customs Enforcement was there. A few workers quit their jobs out of fear.

GOOD! That's a huge victory in my book. HUGE!

Sal Ayala, manager and co-owner of the butcher shop and grocery, knows the sanctuary sign he placed in a store window Tuesday in front of Telemundo cameras won’t do anything to keep ICE away. It won’t carry any legal punch.

Funny! So, he thinks that he will be bringing in more people

But he thinks the sign and his declaration that his store is an immigration sanctuary will send a message. He said the actions support a controversial statewide sanctuary movement that has triggered President Donald Trump’s ire and a federal lawsuit.

Nope, Ayala! Your store still resides in the United States of America.

I called the store today, and the person who answered the phone refused to give me a straight answer whether the sanctuary sign was posted outside of the store. The person just hung up on me. 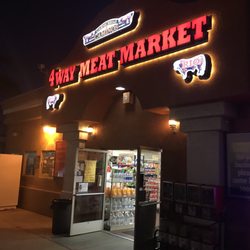 I called a second time, and finally someone informed me that someone had torn the sign down. They plan on putting the sign back up. We want the store to recognize that they provide a service in a civil society, where the rule of law matters. The owner and the workers at 4 Way Meats have neither right nor privilege to defy federal law and declared themselves a safe space for illegal aliens.

Call the 4 Way Meat Market now, and tell them:

"Cities and private businesses must serve as sanctuaries for American citizens ONLY!"

Here is the number: