Democracy Does Not Protect Liberty: Constitutional Republicanism Does

The best way to ensure freedom is not through democracy.

The rule of the majority undermines the rights of the minority.

Natural rights belong to everyone, regardless of their race or ethnicity.

Natural rights drawn from a Divine Creator provide for our safety and security. We have a final identity in Him.

As for proper governance, democratic processes are not the best assurance for liberty.

The marketplace is, the forum of private, voluntary exchange provides the best means and medium for effective distribution of resources.

I was pleasantly surprised to find an article making this case for the marketplace vs. the democratic process right in the local paper!


If democracy is in ‘crisis,’ we should turn to the marketplace

Recently, catching up on email brought me across several references to a crisis in democracy. Clay R. Fuller had written that “One could fill a library with the books and reports regarding the ongoing ‘crisis’ of democracy.” In most, political democracy is treated as an ideal. Yet it is a seriously flawed ideal. In fact, as F. A. Hayek noted long ago, “all the inherited limitations on government power are breaking down before it … unlimited democracy … is the problem today.”

Democracy has been a necessary evil in certain ways for decades, for millenia. Who can forget that Socrates was put to death by the vote of the majority?

Democracies are bringing in more socialism, which is undermining liberty and freedom of property. Arizona had a state-wide initiative to force up the minimum wage, and for what? So that more robots would take jobs away from entry-level workers? Someone tell me how any of this is a good idea?

Perhaps the most blatant evidence is the frequency with which policies and candidates claiming majority support advance coercive measures that take from some to give to others. Such piracy violates universal moral and ethical condemnations of theft, so it cannot be an ideal.

Democracy is two wolves and a lamb voting on what to have for dinner. A Republic ensures that the lamb has a firearm.

There are, in fact, several ways political democracy falls short as an ideal. To be ideal, it would avoid violating individuals’ established rights. It would be responsive; people’s votes would have to matter. It would give people incentives to become well-informed and think carefully about policies. It would require powerful incentives to deter dishonesty and misrepresentation. It would also have to be limited in scope, as no one wants every issue that concerns them subject to majority determination.

This issue of voters' submission of voting--yes, people's votes tend not to matter in too many cases. If a majority, however slim, is the final factor for an electoral victory, what does one say to the 49.9% of people who voted one way and lost?

It is hard to think of government policies that do not violate some people’s rights. In fact, such  violations are often the main driver of policy (e.g., price controls). And those violations eviscerate the central function of a government advancing its citizens’ well-being–defending existing rights. 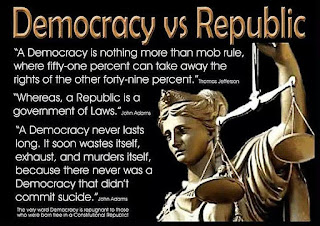 Despite volumes of democracy-extolling rhetoric, virtually no one’s vote changes the results. Name one time your vote for or against a candidate or initiative altered the electoral outcome. Results are not responsive to individual preferences.

I would disagree with this argument on a surface level. I voted for President Trump, and President Trump won. I voted for Assemblyman David Hadley (R-Torrance) in 2014, and he won. I voted for him in 2016 and he lost. The issue has a lot to do not just with voting, but how many people are voting. With those outcomes in mind, other factors play such a large factor in outcomes, not just my own voting.

Further, voters face binary yes/no votes on initiatives or A/B votes on candidates representing bundles of policies and promises. That is far from giving voters power to effectively exercise their desires. The least harmful option, not the most preferred, is frequently chosen.

Good point. The lack of choice, the lack of chosen outcomes, the lack of specific preferences is a problem. Every voter, if the individual chooses to vote, gets boxed into some pretty meager choices. That's how many voters felt during the Presidential election.

Most voters also face very limited incentives to consider policies carefully, illustrated by vast numbers who don’t even know their political representatives’ names. That is largely because individuals’ market voting with their dollars changes their outcomes — better matching their circumstances and preferences — while public policy voting almost never does, but also because more complex policy issues are more difficult to evaluate than private choices.

This part of the article is the most enlightened, the most profound. A voter must spend so much time, energy, and resources figuring out who to vote for, and yet one's exercise of the voter franchise by itself is quite slight.

What's the point of voting when you perceive that your one little vote amounts to just about ... nothing?

Politics also imposes fewer effective constraints on dishonesty and misrepresentation than market arrangements. Beyond greater “customer” ignorance, politics has no truth-in-advertising laws, money-back guarantees or effective warrantees. Politicians’ wares are not easily evaluated. They are primarily plausible-sounding stories about candidates’ intentions, which they cannot accomplish alone, backed with the every-ready excuse that failures represented the best deal actually possible. There is frequently no more than one “electable” competitor to keep you honest, and that is frequently limited only to election season.

Wow. So profound and so sad at the same time. People say just about anything to get elected, but they never follow through. They don't have to follow through! They got elected, and I as a voter cannot recall them or get my "money" back, so to speak!

In political democracy, a majority can also force its preferences on any issue upon all those who disagree. That is why our founders adopted constraints on majority abuse, such as limited, delegated powers and the Bill of Rights. However, those constraints have largely been undermined today.

And a reminder: we are not a democracy, but a republic! Christopher Buskirk wrote in the Washington Post how we are witnessing a restoration of Little R republicanism, a true restraint on the power of the state, specifically the federal government.

We need more of this, not less.

The final government ideal would be to have as little as possible decided by the government, and as much as possible in our lives settled by personal choice and marketplace engagement.

Its system of exclusively voluntary cooperation based on self-ownership requires that property rights be respected; no majority can violate owners’ rights. Individuals’ dollar votes change their outcomes, even when their preferences are not the majority’s preferences, generating the further advantage of making them far better informed than about politics. There also are more mechanisms providing honesty and accountability.

Markets, freedom are a better metric for change and accountability. We need more of that. One of the most important aspects is that efforts and outcomes must respond to what people want. Government does not do that well, unless there is a lot of mobilization and force.

Holding out democracy as an ideal overlooks the question of whether market democracy or political democracy better serves citizens. A very strong argument can be made that a superior form is to remove virtually all decisions and policies we need not share in common (almost all of them, beyond the mutual protection of our rights) from government dictation, and let people exercise self-government, protected by their unalienable rights.

Which decisions do not belong to the government? Decisions which we do not share with others. We all share a need for public safety, water, street services, etc.

But not much else. In the end, the best safeguard for our liberty is not democracy, but constitutional republicanism, precisely because it limits the power of the government no matter who enters into power.