Horror Stories of ObamaCare: Part One 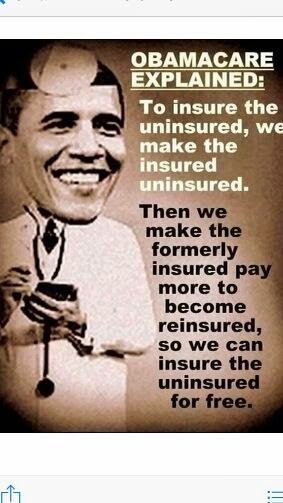 Sara
March 17, 2014 at 12:16 PM
Mr. Schaper, what "claims" are you talking about? My insurance with the ACA is less, benefits better. Nothing for you to "investigate". But love the Anthem ads here just the same! And I love the Affordable Care Act! Thank you, Democratic Party!

I'm 57, healthy, went to exchange, the cheapest, a bronze plan was $455 a month, it will pay 60% of the bill after I surpass the $4500 deductible. This my friends is simply thievery and I won't participate. I want to buy the coverage I want, not what I'm told to (or forced to under threat of the IRS) .. this, is not the America I know, this is some sort of hybrid socialist dictatorship

I just got a letter from health insurance company, and my premiums went up.

Ed of Hermosa Beach (and girlfriend)

I have doctor friends who get fined if they do not write out a specific  number of prescriptions ever month!


Here's a letter I wrote about an elderly gentleman I met in Manhattan Beach, CA:

Walking down Manhattan Beach Boulevard last month, I met a gentleman who had posted a piece of paper on his minivan.

The white sheet with black letters read: “My insurance was cancelled because of ObamaCare.”
I would have never expected someone to air such a frustrating grievance, but such outrageous outcomes must be shared.

When I discussed the issue, he told me that because of the Patient Protection and Affordable Care Act, his insurance coverage was cancelled. His heart doctor had informed him that if the law passed, he would quit his practice.

In 2012, shortly before the June primary, Congressman Henry Waxman admitted in a House budget committee hearing that he did not know that General Motors went bankrupt.

The colleague asking about GM7, Mick Mulvaney of South Carolina, reminded him: “Well, it did. I am surprised you hadn’t heard about it. It was the second largest bankruptcy in US history, if not the largest.”

Relating how retired teachers’ and police officers’ pension funds were defunded to bail out GM, Mulvaney asked: “Since you supported the bailouts, what would you like to tell them?”

On behalf of every resident of the 33rd Congressional district who is losing his health insurance, or struggling to find a doctor, or paying higher health care premiums because of ObamaCare, Henry Waxman’s signature legislation, I ask the Congressman: “What would you like to tell them?”
To everyone reading, I ask: “What would you like to tell Waxman? What should happen to him in 2014?”

Respectfully, don't you have BETTER THINGS TO DO then re-post Media Matters talking points for the progressive mega-cause of ObamaCare?!

Here in my state of RI, HUNDREDS of people have been unable to get healthcare door to poor planning and implimentation. Their are MANY people - whether it be by design or just poor planning - that fall through the cracks thanks to this federal monstronsity...

Here's a statement from Assemblyman Mike Chippendale of Rhode Island:

Responding to a telephone inquiry, Chippendale [state assembly member from Johnston. Here's his contact info] commented that as a member of a permanent joint committee on health care oversight, “It became clear to me that it was nothing but smoke and mirrors. This committee had no say on really anything that the lieutenant governor was doing to set up the exchange.”

About the impact of Obamacare on his constituents, Chippendale added:

“Insurance is being dropped. Some of the elderly are starting to see gaps in their Medicare coverage that didn’t exist before, that now suddenly do. Businesses are frantic. They simply cannot afford to put their employees on these very expensive health care plans.”

Despite claims for accessibility and affordability, from rising health care costs to spiraling government debt, the Affordable Care Act’s careless implementation and uncaring implications have exposed that Obama-Care-Less about the health and wealth of Rhode Islanders.

Cosigning the legislation, Assemblyman Jan Malik (D-Warren) stated: “I just don’t think we can afford it because of the situation we are in right now. Let the feds pay for it.” Making a point that the costs of the state healthcare exchange would increase substantially over the next four years, Malik rejoined: “The issue for me is the dollars and sense. If we could afford it, we should keep it.”

For the record, Malik cosigned legislation which would require the Rhode Island health care exchange be funded only by federal dollars, because the state cannot afford it.

From Amy Gallagher, a benefits manager in Rhode Island:

Go Local Prov Health/Business expert Amy Gallagher works as a benefits administrator, and she had nothing but bad news about Obamacare, citing businesses would face rising premiums beyond the normal 7%. “A defense contract based in Rhode Island will face a 26% hike in health insurance premiums because of this law.” She further commented on other statewide firms which face no other option beyond raising the insurance premiums on their employees just to manage the costs associated with Obamacare. She did not disclose specific names, for fear that those firms would face political retaliation, like losing key contracts with the state.

All my left-leaning, love-to-hate-the-truth trolls, please feel free to read Go Local Prov and Go Local Worcester, you will find lots of great info from me, every Friday!

Thanks!
Posted by Arthur Christopher Schaper at 4:37 PM