A few months back, I rediscovered a post from "Dear Straight People", the pro-LGBT blog based in Singapore, hosted and written predominantly by Sean Foo. The article featured a gay male couple that had first connected in high school, and they had stayed together ever since. One of the males, Jason Yin, was an Asian American, and the other, Thorin Duffin, was a British ex-pat who moved to the United States when he was in high school. The two hooked up during that period of time.

The point for pushing these stories is to give the impression that homosexual relationships are natural, lovely, admirable. The LGBT movement wants to use every emotional ploy and tool at its command to normalize the behaviors, which are inherently destructive, and based on wrong believing and harmful behaviors. And of course, the intersectionality of an Asian-AMERICAN and a Anglo Briton, coupled with the fact that one of them is an immigrant, is too much for these progressive story-tellers to pass up.

A few days ago I tried to find that story, the link was down. Apparently, Sean Foo had taken the story down!

But Archive.org makes sure that we can still find everything! Nothing disappears on the Internet.

Here's the masthead photo for the story: 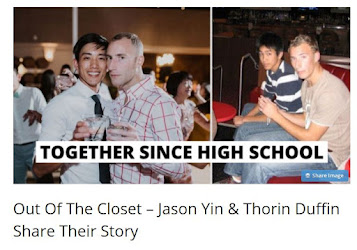 It looks like such a star-studded, warm-hearted story, doesn't it? The homosexual "romance" of two men is just like the love story between natural high school sweethearts, too, right? No one should get upset about same-sex couples wanting to be treated like natural couples, because there is nothing untoward or out of place with any of this, right?
Well, consider how their "romance" began:

In the late nineties, Thorin relocates from England to the United States. In high school, his English accent and boisterous nature help him stand out. His profile rises even higher when he is appointed captain of the football team. Within a short span of time, Thorin effortlessly climbs the social ladder to become one of the most popular guys in high school. He is even crowned prom king.

Fate conspires such that Thorin is seated behind Jason. Unlike Thorin, Jason is quiet and studious. The likeable but ‘invisible’ Asian American that has recently become a staple in teenage rom-coms.

Maybe it’s hormones. Or perhaps just boredom. But Thorin starts poking and tickling Jason from behind. The bickering soon evolves into a full-blown romance.

They become each other’s first love. First kiss. First everything. Over a decade later, they’re still happily together.

As unbelievable as this sounds, this is not the plot of a new Netflix rom-com. This is a true story.

Can you imagine one male poking and tickling another? In a classroom? Something is a little unsettling about all of this. Perhaps the British guy was attracted to the "invisible" Asian since he would be so hard to get? Who knows?

Then their first kiss, which took place when they were working on a high project at one of their homes:

Thorin: "He said “I’m gonna nap” and then turned off the light. We laid on either side of this massive bed and one of us said they were cold (I think it was me). Then we kinda got closer until our faces were almost touching and he said “f*ck it” and kissed me."

That first kiss eventually culminated in their first relationship. Against all odds, their high school romance endured. 12 years on, Jason and Thorin are still going strong.

Was their relationship strong, though?

Here are later events that erupted in Jason and Thorin's relationship:

Jason: "In high school, Thorin always got a lot of attention. I felt like I wasn’t as noticeable. All of my special traits were kind of overshadowed by him.

"For a brief period of time, I forced him to adopt an American accent since the English accent really pulled a lot of unwanted attention. I wanted to go into the relationship as an equal, not someone that was inferior.

"It turned into several weeks of disagreements and almost break-ups."

But then over a decade later, consider this:

Thorin: "We were 26, had just had 4 Vietnamese coffees. It was 2am, and neither could sleep."

"We began discussing sexual fantasies and Jason shared the sentiment that we had only ever had sexual experiences with each other, and there had been a lot of hot guys especially that day on the streets of Ho Chih Minh City.

"He said something to the effect of “I’d want to have sex with hot guys while I’m still young and attractive” and I think we both shared that sentiment. So we downloaded Grindr."

For a couple that was so content with each other, they wanted to explore sexual fantasies with ... other men?

Sadly, it's all too common for homosexuals. They do not settle down with one partner, but end up engaging with multiple partners. Some research suggests that the average number of partners is fifty!

Again, this is not some "Happily Ever After" story. Not at all. This is quite sad, pathetic even. A "couple" that had been together since high school has come to terms with the fact that they just want another sexual experience, or multiple sexual experiences. How is any of this love? How does any of this foster trust or intimacy?

Whatever men are seeking if they engage or indulge in homosexual behaviors, they simply will not find. Two men cannot complement each other, and their bodies cannot serve one another as a "help-meet". The same is true for two women.

Sean Foo shares his thoughts about how people would react to the news that this "gay high school romance" is actually pretty flimsy:

Indeed, it does. This story turned out to be quite disappointing, even if someone were strongly pro-LGBT and willing to celebrate a male couple staying together through high school and beyond.

Yet, ironically enough, this pro-LGBT website once again shows how "straight people" have a better chance by design for a fulfilling relationship. Two men cannot satisfy the deeper emotional or psychological needs that they try to meet in a homosexual relationship. This matter goes beyond "the parts don't fit." Whatever fulfillment they were hoping to find in their sexual exploits, those needs were simply not met, and they ended up believing that the best forward was to open up their relationship.

I submit that Sean Foo took this post down because this whole story bolsters the larger argument, ultimately, that homosexuality is not a healthy, preserved, or fulfilling way of life. If two high school "sweet hearts" want to try something, or rather someone new and engage in all kinds of fantasies, it just goes to show that their "love" really was not love to begin with.

Therefore, when LGBT militants chant "Love is love", they are not telling the truth at all.