Two years ago, the California State Legislature passed a bill which would require gubernatorial and presidential candidates to reveal their tax returns to the public.
The bill was summarily struck down as unconstitutional within a matter of months. In fact, the California Supreme Court unanimously struck down the legislation!
Of course, going back two years, one finds that even the Los Angeles Times warned Governor Newsom and the state legislature from pursuing this course. 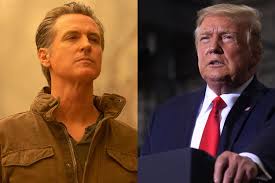 Consider this editorial in light of what happened:
Editorial: California’sbill requiring candidates to show their tax returns is partisan andcounterproductive

It’s understandable that Gov. Gavin Newsom would want to set himself apart from his predecessor and show the world that he’s not just Jerry Brown 2.0. But by signing a very problematic bill on Tuesday — one that Brown vetoed in 2017 — Newsom took a slap at Donald Trump that is hyperpartisan, probably counterproductive and perhaps even unconstitutional.
The “Presidential Tax Transparency and Accountability Act” is clearly directed at Trump, who as a candidate bucked the modern tradition of releasing his tax returns during the campaign. The new law requires that candidates for president in California release five years of tax records before they can be included on the state’s primary ballot.
The legislation was clearly unconstitutional, not "perhaps" unconstitutional. What nonsense! The Los Angeles Times desperately wanted to shore up their support for Gavin Newsom, all the while trying to stop him from making this very political mistake. No matter how corrupt and partisan the corporate press has become, they have to pretend to show some semblance of objectivity.
This means Trump must turn over his tax documents in the 2020 election or be left off California’s March primary ballot. Hah. Take that Mr. Trump. Will this damage Trump’s reelection bid? Of course not. No matter what happens in California’s primary, Trump’s name is likely to be on the November general election ballot in all states. And the only people hurt by his failure to appear on the primary ballot are the millions of California Republicans who will be denied the right to pick the candidate of their choice.
Furthemore, this action hurts all the taxpayers in the state of California, because of the ongoing legal challenges which would take place. This also makes Democrats look petty and vindictive.
To be clear: Presidential candidates ought to share their tax documents with the public. Trump’s refusal to do so was arrogant, and left the country rightly wondering what conflicts of interests he has and just how little he has been paying in taxes.
Wait? Who says that the President, or any presidential nominee, has to share their tax returns with the public? There is nothing in state or federal statute anywhere, and certainly not in the United States Constitution, which requires a presidential candidate to tell the world how much he pays in income taxes or otherwise.
But adding new requirements for candidates is a bad idea. If California adds this partisan requirement as a slap at Trump, what’s to stop red states from adding a requirement that candidates release their birth certificates? Will some states require candidates to release their health records? Do we really want every state to have its own requirements governing who can run for president? That’s a recipe for confusion.
These are lame reasons for the LA Times editorial board to urge the Governor to reject signing the bill. They do not want to offer the principled reason--it's unconstitutional--because the LA Times is another partisan Democratic organ, nothing more. They have no credibility, no integrity, and no one has any interest in taking them seriously.
If voters think a candidate should have released his tax returns, they can punish him or her at the polls on election day.
Wow! What a concept. Of course, the LA Times will tell readers that they should vote for the Democratic candidate, or else admit that they are racist.
The new law also may be unconstitutional. As we have pointed out in editorials more than once, states have the authority to regulate some ballot access for federal elections. Beyond that it’s not clear if they even have the legal right to place further restrictions on presidential candidates beyond what is already required by the U.S. Constitution — that a candidate be 35 years old, a natural-born U.S. citizen and a resident of the U.S. for at least 14 years.
It's clear that they have NO right to interfere with demands and limitations or requirements or conditions for federal candidates running for national office. The United States Constitution provides the process by which electors are to be selected, but the states cannot throw in arbitrary rules to limit who can place their names on the ballot.
If other states take similar action, it may well deepen the partisan divide that has roiled politics and turned Americans against one another. How does that help?

The Los Angeles Times actually wants to scold and lecture the state legislature about being partisan? Really? The LA Times goes out of its way to push regressive, leftist talking points, all of which are undermining our country and hurting the common fabric that has kept this country together for 245 years. What a shame that the LA Times actually thinks that they can rollback the hackneyed partisanship which they have fomented for the last five years.
It's good that the LA Times slammed Governor Newsom for supporting this terrible Tax Return Primary Bill, but they had laid the groundwork with their relentless progressive posturing which made such legal maneuvers all but inevitable.
Posted by Arthur Christopher Schaper at 10:10 AM