On to the State Senate – where chances of passage are excellent

See video below of bizare LGBT testimony against it! 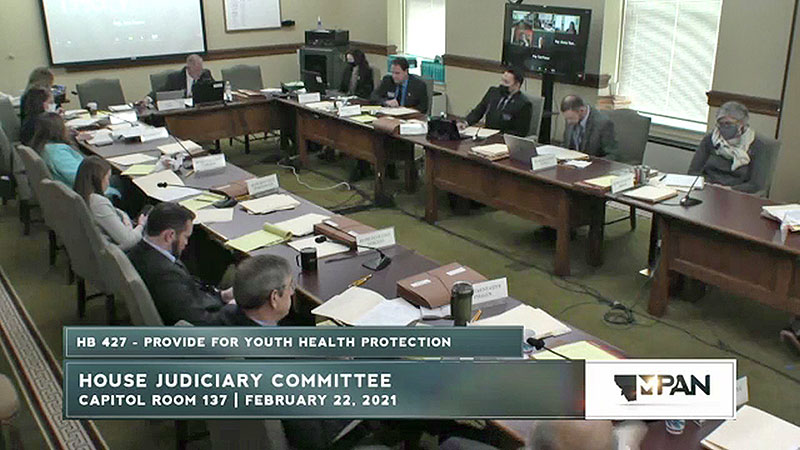 The public hearing on Bill 427 before the Montana House Judiciary Committee faced a full-court press by the LGBT lobby, the radical medical establishment, and more.

The powerful and well-financed transgender movement suffered a big loss as pro-family Republicans and MassResistance refused to give up on an important push to protect vulnerable children from permanent damage to their bodies.

We reported on Feb. 2 that bill 113 to ban the ghastly transgender “sex-change” procedures (both surgeries and hormone treatments) being done on children was defeated 51-49 in the Montana House of Representatives. It was a tremendous shock to people in that state.

These “medical procedures” permanently change and disfigure a child, often result in sterilization, and cause enormous trauma lasting a lifetime. But they are big money-makers for so-called “gender clinics” in children’s hospitals (and many smaller clinics), as well as “Big Pharma.” The transgender push on children is an important part of the LGBT ideology, which has now been accepted throughout corporate America.

Even though the Montana Legislature is dominated by Republicans, 19 Republicans caved in and voted against that bill. They would not stand up to the enormous pressure from organized LGBT activists, the Montana Hospital Association, and even the Montana Chamber of Commerce.

The sponsor of Bill 113 was Rep. John Fuller, a wonderful pro-family fighter. Immediately after the bill’s defeat, Rep. Fuller filed a Motion to Reconsider. But that was defeated by an even greater margin, 53-46, as more Republicans caved in. The situation looked bleak.

Not giving up: Bill was re-filed!

MassResistance activists in Montana strongly encouraged Rep. Fuller and the other key lawmakers who had pushed for Bill 113 not to give up. They agreed that the damage being done to vulnerable children was too horrific to call it quits.

Working with another legislator who had a draft for legislation which could cover subjects relating to health issues, Rep. Fuller introduced a revised version of the initial bill. The new bill was titled HB 427.

Because of the Montana legislature’s rules of procedure, a new bill has to be considerably different, or it will get struck down as redundant. For that reason, HB 427 only bans the transgender surgeries. It does not include puberty blockers or cross-sex hormones. This legislation is not perfect, but it’s much better than nothing. And because of this difference, the House leadership – which had opposed Bill 113 – decided not to oppose Bill 427. The bill passed its procedural review in the House Rules Committee, 12-7.

Before it could go to the full House, it had to get through the House Judiciary Committee.

The House Judiciary Committee hearing for Bill 427 and several other bills convened on Feb. 22 – at 7:00 am in the morning! The small committee hearing room included nearly a dozen LGBT activists and supporters from across Montana. Others had signed up to testify remotely via Zoom. The hearing on Bill 427 was allowed to go on for only a little more than an hour.

At the hearing, Rep. Fuller spoke first on Bill 427. In fairly strong terms, he reminded the committee members that government has a right and responsibility to step in and protect children – even against pressure from special interests. 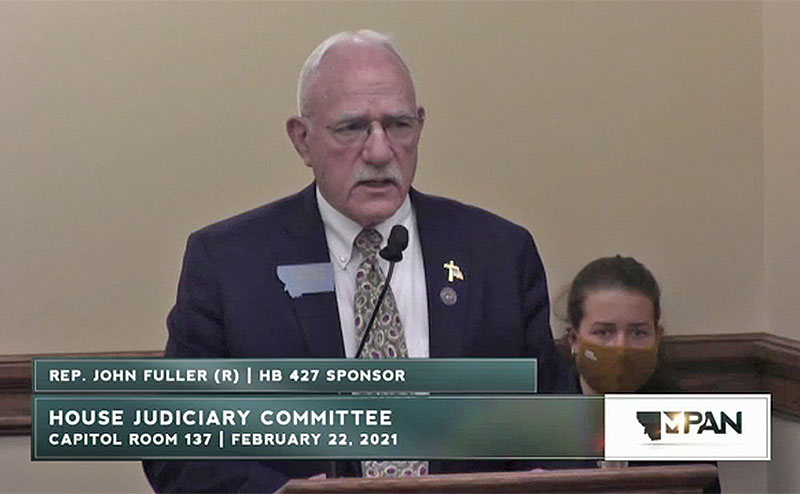 Rep. Juhn Fuller faced down the LGBT onslaught without flinching!

The proponents of the bill spoke first. Although our side had wide support across the state, we only had four people who were willing to publicly testify. Luckily, one of them was our National Director, Arthur Schaper who anticipated what the opponents would say and demolished their regular talking points. The director of the Montana Family Foundation also spoke.

About 20 people spoke against the bill, in person and via Zoom. They ranged from recent high school graduates (fully propagandized) to adult “transgenders,” left-wing activist groups (including Planned Parenthood), radical medical people (including a pediatrician, a surgeon, and psychiatrist!) and, of course, parents of “transgender children.”

Their range of arguments were quite chilling, offensive, full of obvious lies, and pointedly ridiculous. But it was clearly well organized and rehearsed. They repeated over and over the LGBT propaganda that not allowing these mutilating medical operations on children would somehow “hurt” so-called “transgender youth.” It was a testament to the power and ideological force of the LGBT movement even out in Montana.

Here is the testimony. It’s an hour long – but a real education!:

At the end of the hearing Rep. Fuller spoke again. Then a vote was taken and the bill passed out of committee, 11-8.

The pro-LGBT contingent was well-organized and well-rehearsed with their disinformation and irrational talking points. 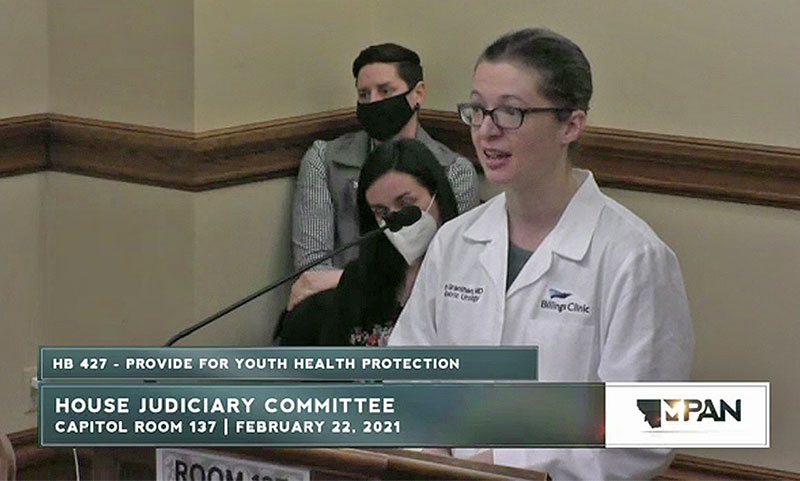 Misinformation. This woman is a pediatric urologist who falsely claimed that the bill would ban surgeries on children to correct deformities or to treat cancer or urinary problems. In fact, the text of the bill specifically excludes issues not related to gender dysphoria or gender transition. 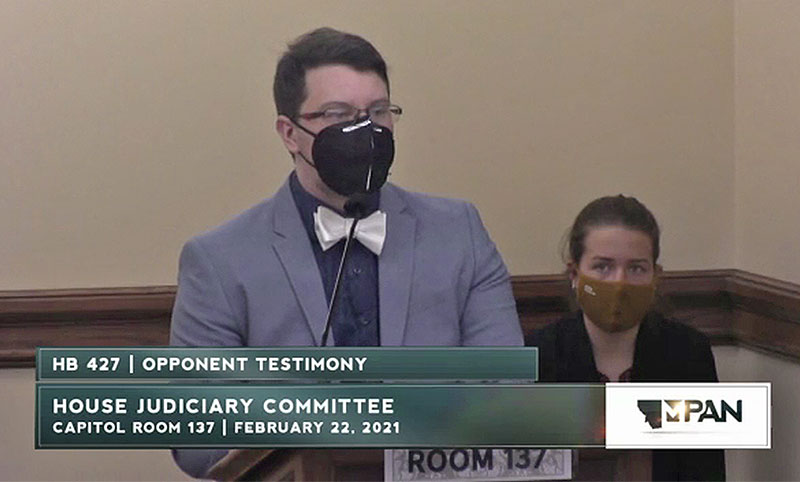 Misguided emotion. This person, with the "Montana Human Rights Network," claimed that a 19-year-old male-to-female "transgender" attempted suicide last week because he heard that this bill had been re-introduced - and that bills like this cause suicides, and also have "devastating effects on the economy."

Votes on the full House floor – it passed this time!

From there, Bill 427 went to the House floor. Since the House leadership wasn’t opposed and our side kept up the pressure, this time the momentum was with it!

And on to the Senate. One of our MassResistance activists is a Montana State Senator. He and others tell us that it should have no trouble getting through the Senate! There haven’t been any committee hearings scheduled yet. But this time we will have a MUCH stronger force for testimony!

The conservative movement is known for quitting when things go south. We don’t believe in quitting!

But the fact that this was such a hard battle in a red state like Montana shows the power of the huge money behind these radical and very destructive left-wing causes, even in the most conservative of states. But that’s been a problem for over 50 years. Wealthy conservatives do not want to fund grassroots activism to fight back – especially against the LGBT movement, but also other radical movements like Black Lives Matter. This is not likely to change – but it means that all of us need to work harder than the other side with the resources we have!

Posted by Arthur Christopher Schaper at 11:02 AM