Yes, Chafee is That Awful

I recently posted an article called “RI’s Lincoln Chafee: Awful Awful”. I could not resist writing a delicious send-up against the former governor, likening him to the signature Rhode Island ice cream beverage.
I received a lengthy comment from one detractor who actually defended the former Governor and current Presidential candidate, even though he cannot raise any money, and literally no one is voting for him in current Democratic primary polling.
The preliminary remarks began with the usual Saul Alinksy Rules for Radicals suspects: personalize, polarize, demonize:
Dumb people hate what they don't understand. Whoever the Author is [sic], I bet they [sic] think they are god's gift to earth, and Rhode Island. In the opening paragraph they had to tell the reader how smart he was, but it only took another paragraph to realize they were just fancy with words. Ignorant bandwagoner, it’s so easy to beat up on Lincoln Chafee when you are simple minded.
My criticisms of Lincoln Chafee are wrong because I am stupid, or I am going along with the opinions of others. Really? No initial response my arguments. By the way, with all the spelling and grammar errors, the commentator ought to watch the windows in his own house before throwing stones at others.
His post does list reasons why Chafee was so great:

"Lack There of" ... Talking about Lincoln Chafee's Record. Um HELLO... He is the only Presidential Candidate to serve on all three levels of government.... I think the writer should stick to writing about food and forget about politics, because he is doing a disservice to the country and making everyone else dumber. I bet he's the type of person the comes [sic] to Rhode Island to enjoy the beaches with his metal detector. Never done anything for the community, except maybe read about it. 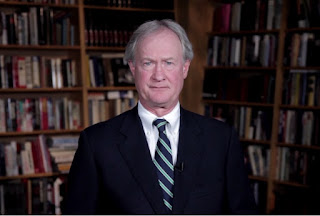 So, I should go back to being barefoot and dumb in the kitchen, and keep my mouth shut. What is it about apologists for the Left? They are interested not in dialogue, but dominance. They do not want to discuss; they want to end the discussion, or promote the fraud that the discussion is over because the science or the evidence has been settled.
But back to Chafee. The writer points out that the former Governor “is the only Presidential candidate to serve on all three levels of government.” Granted, Chafee worked at the local, state, and federal level, though not in that order. He also lost re-election to the federal seat, and decided not to run for re-election as governor.
In itself, this argument based on authority or experience is as tired as the climate alarmism mantra spewed out by US Senator Sheldon Whitehouse. Once, the junior US Senator from Rhode Island listed all the major corporate and government entities who sponsor climate change as a major issue. Yes, even Pope Francis of the Vatican preaches on climate change, but the list of dignitaries (dignified or otherwise) does not upend that the science is not conclusive, and even refutes the prevalent alarmism buoying bureaucrats to push more regulations.
Furthermore, a long resume in government does not necessarily transfer into qualifications for higher office. One of the most experienced presidents in terms of public “service”, James Buchanan, has been deemed one of the worst and most ineffectual chief executives in this country’s history. Ironically, Buchanan’s extensive prior experience aided his ongoing justification not to act while individual states were breaking into civil unrest (“Bleeding Kansas”), then while entire states decided to secede from the union over slavery.
The commentator does provide a list of Governor Chafee’s accomplishments one term in office:

Legalizing Gay marriage
How this is a success remains debatable. The redefinition of marriage by legal statute met with heavy resistance from Rhode Islanders throughout the state,  and brings into question the long-term efficacy of state governance into the realms of redefining cultural realities. Chafee argued that gay marriage would boost commerce. Did not happen. 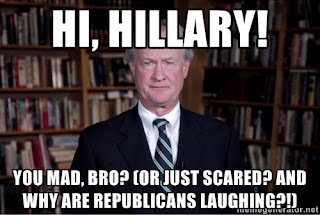 
Chafee wanted “pot for potholes,” but he did not decriminalize marijuana.

Setting up one of the best state insurance exchanges
This statement is so false as to be laughable. Rhode Island lawmakers cosponsored a bipartisan bill last term to end the state exchange and let the federal government take over.

Reforming the pension system (not really a progressive thing, but it was an accomplishment)
Those reforms met serious opposition not just from the labor unions, but from the very lady who helped engineer their passage in the state legislature: current Governor Gina Raimondo. How many times did the unions challenge these reforms, then withdraw again to the ballot box to vote on the extent of the reforms?

Preventing the capital (and several other cities) from going into receivership
Does this commentator read the news? Woonsocket is descending into a morass of socialism, with more welfare recipients than wealth creators. Providence has already defaulted on its pension debt.


We saw more investment into the state university system
This argument distorts the definition of “investment”. Tax dollars from property owners and businesses are not investments, since they had no choice. “Redistribution of wealth” is more accurate. The more celebrated universities, like Brown, are private institutions, and should remain private if they wish to prosper.

And this year, we're projected to have a surplus in the tens of millions, thanks to his budget.
If there is a surplus, why did Raimondo want to tax Taylor Swift’s mansions, then raise bridge tolls and truck fees? Why pressure taxpayers for a baseball stadium in Providence?
Final Comments
Mayor, Senator, and Governor Chafee has a record of losses and near-misses, and his latest foul-ups on the campaign trail upend argument that the former governor will be a strong contender for the Democratic nomination, let alone the Presidency.
Yes indeed, Rhode Islanders, Lincoln Chafee is a bad kind of “Awful Awful”, so much so, that even his ardent supporters cannot help but make him look. . .awful.
Posted by Arthur Christopher Schaper at 8:37 AM