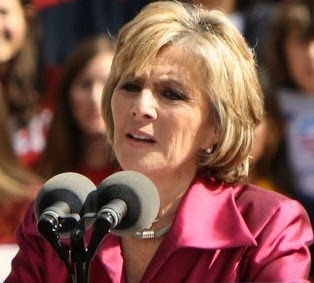 US Senator Barbara Boxer (D-California) is

one of the lowest ranking Senators in Washington.

She is justly unpopular. She once claimed on camera in the Senate that a baby is a baby when the mother takes the baby home.

She once waved a massive appropriations bill in a war of words with US Senator Lindsey Graham (R-South Carolina), claiming that the Obama Administration spending was justified compared to President George W. Bush

She snidely derided Senator James Inhofe (R-Oklahoma) when she reclaimed the chairmanship of the Senate Environmental committee.

CEO Harry Alford of the Black Chamber of Commerce rebuked Boxer for playing the race card on energy issues. The Senator wanted to justify her position and argued that Alford should do the same because the NAACP agreed with her. Race should never have played any role in the discussion.

If there is any war on women which readers should be aware of, look no further than the frequent perversions of Democratic lawmakers.

1. In the early 1980s, Congressman Gerry Studs of Massachusetts was caught sleeping with an underage page.

3. Congressman Gary Condit of Modesto gave up his seat following an illicit affair with an intern, Shandra Levy, whose body was found mangled in the outskirts of Washington D.C. (and he was the only House Rep to vote against expelling the irrepressibly corrupt James Traficant of Ohio, bell-bottoms and toupee and all)

4. Let's not forget about President Bill Clinton, who lied under oath to a grand jury about his affair with his own intern, Monica Lewinsky. Clinton was accused of rape and sexual assault during his tenure as Arkansas governor, as well. (Remember Paula Jones? Kathleen Willey?

5. Former North Carolina US Senator John Edwards was sleeping with a campaign staffer, even while his wife was dying of breast cancer. He lost the nomination for President twice, and afterwards he lost his wife, his standing, and just about any sense of dignity.


6. Congressman Anthony Weiner was taking pictures of his private parts and tweeting them to online paramours. When Andrew Breitbart exposed the perverse pictures, Weiner first claimed that his Twitter account had been hacked, but after two weeks of more pics online he confessed to a terrible set of habits. Finally pressured to resign, Weiner then appeared to seek recovery and mend his frayed family life. Leaping into the New York Mayor’s race, Weiner had to explain to voters why he was still tweeting inappropriate pictures of himself even after he resigned from office. He finished at the bottom in the New York Democratic primary that year.


7. This past summer, the Mayor of San Diego Bob Filner was accused by not one or two, but eighteen women who claimed that he had sexually assaulted them. He confessd to these outrageous, repeated acts of misconduct. In a stunning PR about-face, feminist attorney Gloria Allred represented these women’s civil claims against a Democratic politician. Even Filner’s fiancée dumped him. After a month of stalling, and stunning silence from Democratic lawmakers in California and Washington (including Barbara Boxer), Filner resigned.


Where was Boxer when these Congressmen, Senators, and Presidents were engaged in such despicable behavior? Where was the moral outrage when Filthy Filner was feeling up every female he could find? Why did she not speak up for the many women abused by these unseemly men?


If there is any war on women which needs to be stopped, it’s the war waged by Democratic politicians against the very people whom they claim to champion: women, and Barbara Boxer has been silent.
Posted by Arthur Christopher Schaper at 6:20 PM