Leah Nora Smith-Enciso is one of the most aggressive, vile haters in Torrance.

I am just disgusted and dismayed at the amount of spittle and shrapnel she has spewed against me.

Really, Leah? Are you that afflicted with "Schaper Derangement Syndrome"? Seriously?

You all really have to see how dsyfunctional the regressive left is in Torrance.

First, I am reposting some of the comments that they had shared, specifically about targeting city council candidates with defamation about racism: 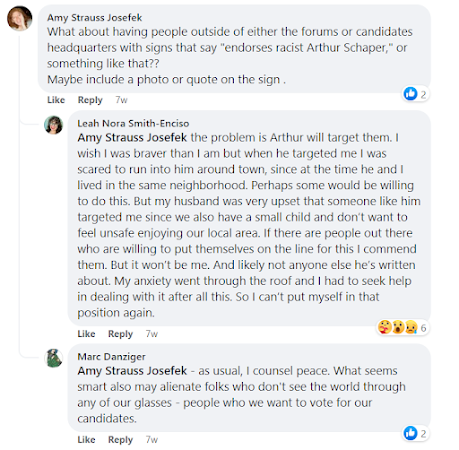 In yet another source of laugh-out-loud merriment, I discovered the following from Leah Nora-Smith "Pro-LGBT" Enciso:

I wish I was braver than I am but when he targeted [sic] me I was scared to run into him around town, since at the time he and I lived in the same neighborhood.

Once again, give me a break! This is either cowardice virtue-signaling, or more proof of the lingering effects of Schaper Derangement Syndrome.

My anxiety went through the roof and I had to seek help in dealing with it after all this. I can[t ut myself in that position again.

The hypocrisy is shocking and striking all in one throw. I cannot believe these people. They have no problem launching hateful tirades and defamatory hate against anyone and everyone whom they disagree with, but as soon as someone fights back and calls out their hate, they cry, they whine, the crawl into a ball on the floor, then plea for help.

This woman actually sought counseling for anxiety because ... I called her out for her hate? Here's a solution, Leah: stop hating people who do not look like you. Stop hating on people just because they disagree with you. Stop shaming mothers and fathers who care about kids and oppose LGBT grooming in the  public schools.

And on this issue especially, I am going to be unsparing in my criticism.

Here's another hateful, defamatory remark that Smith-Enciso wrote about me: 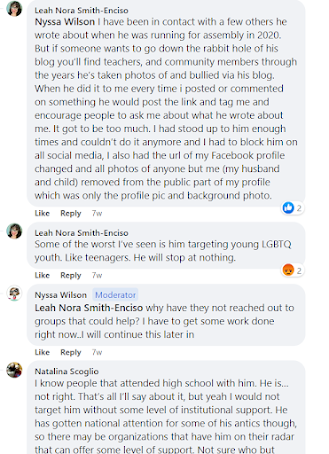 Smith-Enciso writes:
Some of the worst I've seen is him tarteting young LGBTQ youth. Like teenagers. He will stop at nothing.
First of all, does this woman ever bother to edit or spell-check what she writes. "Young LGBTQ youth ..." Seriously?
Then for her talk about so-called LGBT "youth." This is really, really disturbing and disgusting.
Florida State Senator Ileana Garcia could not have said it better: "LGBT is not forever." People are not "born that way," and that certainly applies to children. For decades, the whole homosexual-transgender lobby has been targeting children, especially young, at-risk, emotional unstable youth, and pressuring or posturing them to accept false LGBT "identities."
This is grooming, nothing more. Any adult who thinks that it is OK to normalize LGBT anything to children is a GROOMER. It is absolutely disgusting. What kind of sick adult thinks that it is OK to have a "Gay-Straight Alliance" or a "Gender-Sexuality Alliance" club on a high school, middle school--or even elementary school!-campus?
Young people naturally struggle with identity issues. They have problems at home, they may have parents who do not care about them, or they may have one over-bearing parent and another parent who is distant and unhelpful. But for any adult to celebrate "LGBT Youth" is nothing more than child abuse and grooming.
Kids are not gay, either, and adults should not be pressuring or seducing them into such harmful, destructive lifestyles.
Shame on Leah Nora Smith-Enciso for normalizing childhood traum and abuse! Shame on her for being a groomer.
SHAME ON ANY ADULT who pushes or celebrates LGBT on children. This is absolutely disgusting, reprehensible, and appalling. Indeed, people like Leah should be ashamed of themselves, and ashamed to show themselves in public, and I am not ashamed nor afraid to call them out!
Posted by Arthur Christopher Schaper at 3:47 PM