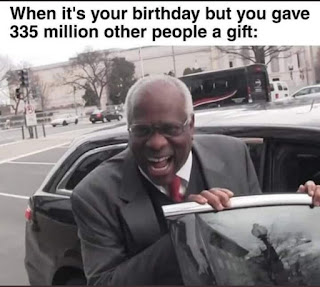 MoveOn.org has moved into self-parody.

They are actually trying to fundraise from embittered leftists by demanding the impeachment and removal of Justice Clarence Thomas.

This is just plain Self-Parody. Is "MoveOn.Org" a serious organization at all?

This is a joke.

But you have to read their latest email campaign to believe it:

SIGN NOW: Clarence Thomas must resign from the Supreme Court immediately or else be impeached.Dear MoveOn member,After the right-wing-rigged Supreme Court overturned Roe v. Wade last week—effectively taking away abortion rights and the right to privacy that's been considered legal precedent for the past 50 years—local and national press outlets are covering reform of the Supreme Court like never before.1 We won't go back. That's why more than 450,000 MoveOn members have signed the petition calling on Clarence Thomas to either resign or be impeached. Will you take a minute and add your name too?And as if the ruling on Roe is not enough, Justice Clarence Thomas—who sided with the majority on overturning Roe—made it clear what's next: to overturn high court rulings that established LGBTQ+ rights, marriage equality and contraception rights.2Thomas's own ties with Big Money's right-wing organizations and his wife's, Ginni Thomas, leading role in right-wing organizations (especially her efforts to overturn the 2020 presidential election) have been well documented.3 For decades, Thomas has refused to step back from cases that involve his and his wife's interests. Thomas's participation in the Supreme Court case on this matter, and a slew of others, is only the latest example of his severely compromised sense of impartiality and morality. Thomas never should have been confirmed for the court. Now, it is clearer than ever that he must resign—or Congress must investigate, reveal what he knew and when he knew it, and impeach him.

Supreme Court Justice Clarence Thomas should either resign or be impeached.

Now is the time to keep up the pressure. We cannot allow this to be business as usual. Justice Thomas has a history of outrageous, abusive, and immoral actions—and now that it's clear he was willing to use his power to attempt to conceal his wife's role in Trump's 2020 coup attempt, he needs to go. Add your name to the petition to join hundreds of thousands of MoveOn members who agree: Clarence Thomas must go.

Thomas's failure to recuse warrants immediate investigation and heightened alarm. And it's only the latest in a long history of conflicts of interest in the service of a right-wing agenda and mixing his powerful role with his conservative political activism. He has shown he cannot be an impartial justice and is more concerned with covering up his wife's coup attempts than in the health of the Supreme Court.

He must resign—or Congress must immediately investigate and impeach.

Click here to add your name to this petition, and then pass it along to your friends.

Thanks for all you do.

You're receiving this petition because we thought it might interest you. It was created on MoveOn.org, where anyone can start their own online petitions. You can start your own petition here.

This is the most unserious political appeal yet from MoveOn.org. They know that their progressive agenda is danger, and that all the screaming and yelling is not going to save them. In fact, this pathetic self-parody of an email appeal reminds of the corrupt cardinal Johann Tetzel trying to raise money through indulgences after Martin Luther nailed the 95 Theses to the Wittenberg Church Door.

No one was buying their "hellfire" pleas anymore, and no one paid for those vile indulgences.