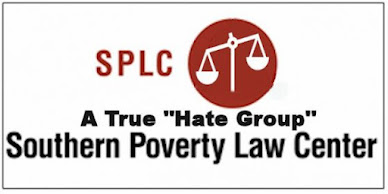 They have a long history of defaming and libeling women, minorities, and people of faith.

Anyone who cites the Southern Poverty Law Center as a serious source for anything is ... well ... a hater, a bigot, a pervert, and probably a big-time groomer.

Here's all you need to know about the Alabama Hate Group otherwise known as "The Southern Poverty Law Center."

1.      The agency's co-founder, Morris Dees, was fired for fostering a work culture of sexism and racism, as well as engaging sexual misconduct. Not exactly tolerant or loving, right? Minority employees never received promotions—ever.

2.      The President of the SPLC, Richard Cohen, was forced to resign for enabling Mr. Dees' misdeeds. So did the SPLC legal director Rhonda Brownstein. Ironically, they fostered and permitted the very culture of hate they claimed to combat. Their organization routinely refused to hire anyone aside from white males and females.

3.      Bob Moser (liberal and openly gay), a former employee of the SPLC, informed the public in an exposé for The New Yorker that the whole SPLC is just a smear-machine fundraising mill, nothing more. The agency was never intended to actually stop extremism and hate, but just raise money off of gullible corporate donors who wanted to feel that they were helping the fight.

“All the time, dark shadows hung over everything: the racial and gender disparities, the whispers about sexual harassment, the abuses that stemmed from the top-down management, and the guilt you couldn’t help feeling about the legions of donors who believed that their money was being used, faithfully and well …. We were part of the con, and we knew it.”

4.      The SPLC was forced to pay a $3.3 million settlement to Maajid Nawaz for libeling (not just labeling) him and his organization the Quilliam foundation as an "anti-Muslim extremist" simply because as a Muslim reformer he opposes Sharia Law and supports women’s rights. Former President Richard Cohen had to make an official apology, too.

Maajid Nawaz said that he was “targeted” by the SPLC: https://www.youtube.com/watch?v=CZYa8J_NU8Y

5.      SPLC has smeared MassResistance as a "hate group." It's a laughable charge.

a.       Our organization spans chapters throughout the world, including Nigeria, Chile, Taiwan, and Hong Kong, as well as the United Kingdom. We have men and women of all ages and ethnic backgrounds who have sought MassResistance to help them combat the LGBT agenda and its lies. How is that hate?

b.      For the record, mothers and fathers who care about their children do not constitute any kind of "hate group". The truth is, it is hateful to call loving parents "haters" for protecting their children from sexual deviance and perversion.

c.       Homosexuals have contacted our activists and our main office to voice SUPPORT for our activism. A number of them want to leave the LGBT culture, but fear the repercussions of breaking away.

6.      The Southern Poverty Law Center has listed the following groups as so-called hate groups. The collection of groups which they have smeared with this canard is so laughable, that any pro-family/conservative activist group that is NOT on their list should question their effectiveness!

a.       The Alliance Defending Freedom

b.      The Family Research Council

g.      The Remembrance Project – This group fights illegal immigration, and represents the concerns of families whose loved ones have been killed by illegal aliens. This is hate?!

i.        National Coalition for Issue Reform – This is the most nonsensical I have seen yet.

j.        The American College of Pediatricians – Yes, the SPLC labels caregiver doctors for children as a “hate group” – are you laughing yet?!

k.      The Pacific Justice Center – This group based in California fights for religious liberties and parental rights. That’s hate?

l.        The Jewish Defense League – I kid you not. They consider Jews who defend Israel a “hate group” – This is beyond ridiculous.

m.    Christians and Jews United for Israel – Once again, the SPLC attacks Jews as a hate group. They sound more like Nazis or the KKK.

n.      The Center for Immigration Studies – This group is headed by an Armenian-American, by the way. This group is one of six suing the SPLC for libel.

o.      Federation for American Immigration Reform – This group has supporters of all backgrounds, including Black and Jewish Americans.

8.      The Washington Post printed an editorial slamming the SPLC as having lost all integrity:

When even the Washington Post has given up on you, you are a lost cause!

9.      Regarding the charge of Homophobia: "Homophobia" suggests a fear of homosexuals. On the contrary, MassResistance and its members have never shied away from confronting individuals on the dangers of LGBT behaviors. In fact, our main office has received commendations from currently practicing LGBT individuals to support our efforts to confront this agenda! It is not a mental disorder to oppose LGBT Behaviors, since they are fraught with disease, dysfunction, and death.

The Southern Poverty Law Center Is Everything That’s Wrong With Liberalism by Nathan J. Robinson

“The Southern Poverty Law Center perfectly shows social change done wrong. It was a top-down organization controlled by an incompetent and venal leadership. It was hypocritical in the extreme, preaching anti-racism while fostering a racist internal culture and being led by men whose own commitment to equality was questionable. It didn’t care about listening to and incorporating the viewpoints of the people it was supposed to serve. It was obscenely rich in a time of terrible poverty, and squandered much its considerable wealth. Finally, it picked the wrong political targets, and focused on symbolic over substantive change. Each of these practices goes beyond the SPLC, and is endemic to a certain kind of “elite liberalism” that desires “progress” without sacrifice. It is the kind of liberalism recognized by Phil Ochs in 1966, and its chief characteristics are a deep hypocrisy and a lack of willingness to seriously challenge the status quo.”

“The center has become a hate group itself” – John Stossel

12.  The SPLC smears a Dutch-Somali immigrant Ayaan Hirsi Ali because she supports women’s rights. There’s your intersectionality backfiring on the SPLC, right there!

One can ask: “Do they have a problem with black immigrants? Women who have survived sexual assault?”

13.  The SPLC takes in hundreds of millions for dollars, pays their senior employees six figure salaries, and stashes huge amounts of cash in offshore accounts. How is this fighting hate? How is this an example of “poverty”?

14.  Harpers Magazine exposed how the SPLC profits from intolerance:

The Church of Morris Dees

15.   The SPLC has become so discredited, that the FBI no longer lies on them for information about hate groups:

16.   The magazine Foreign Policy has analyzed and concluded that the SPLC does not provide objective information to monitor hate groups:

17.   The new President and CEO of the SPLC is Margaret Huang. She took a picture of the intolerant anti-white, anti-Semite Nick Cannon, and she has still not taken down the picture or disavowed the picture:

18.   SPLC had to retract article for defaming progressive journalists like Max Blumenthal

21.  The Southern Poverty Law Center has raised hundreds of millions of dollars, and then stashes the massive amounts of cash in off-shore accounts. How does any of this help fight for civil rights?

22.  The Southern Poverty Law Center members have gone on record making it clear that they are not a non-biased civil rights organization, but a partisan group that targets conservatives:

23.  The Southern Poverty Law Center is no longer a credible source, even according to liberal journalists:

22. Wikipedia does list MassResistance as a hate group, but that’s only because of the Southern Poverty Law Center’s defamation. The founder of Wikipedia left the company in 2007, and he has announced that Wikipedia has no credibility:

Check out this statement from one of the survivors from that massacre: