Some of the comments beneath Jen "Karen" Graham's post attacking me, Mayor Chen, and Councilman Mattucci (click here for details) were too funny to ignore.

A number of the remarks from established leftists Leah Nora Smith-Enciso were quite entertaining!

Check out the remarks from Leah Enciso, another hater in the city of Torrance who shamed me because I stand up for natural marriage, life, and secure borders for a country: 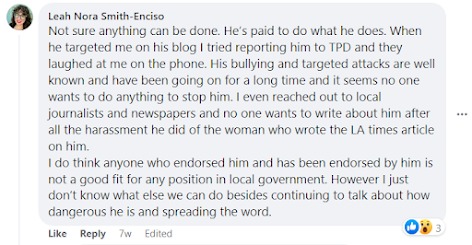 I can case you cannot read the comments above, I will reprint and comment on them for you below:

Not sure anything can be done. He's paid to do what he does.

There are a few things that can be done. Leah Nora Smith-Enciso can stop promoting violent hate groups like The Southern Poverty Law Center. She can stop promoting the degeneracy of youth with her push to normalize LGBT ideologies onto children. She can also stop publishing Left hate and stop defaming people who disagree with her. Of course, such efforts would mean that she would have to reflect on her own wrong believing, wrong thinking, and wrong doing.

And no leftist wants to do that.

When he targeted me on his blog, I tried reporting him to TPD and they laughed at me on the phone.

I laughed so hard when I read this, I thought I was going to have a stroke! This admission was one of the funniest I have read in a long, long time.

She actually called the police on me?! Really?!

Leah continues to cry, play victim, and make a fool of herself:

His bullying and targeted attacks are well known and have been going on for a long time and it seems no one wants to do anything to stop him.

First of all, calling out people's hateful ideas and defaming remarks is not "bullying or targeted attacks." It's called "calling people out," and if Mrs. Smith-Enciso has a problem with that, then she should learn some manners are stop shaming and villifying people who disagree with her.

Thirdly, I am not surprised that "no one wants to do anything to do stop him." You want to do know why no one wants to stop me? Because they appreciate the fact that I am standing up to the real bullies, haters, and hatemongers in the city of Torrance, i.e. the small coterie of leftists and local agitiators and keyboard warriors who think that they can write nasty things about people and get away with it, with impunity. I run into people every week who are grateful that I speak up at city council meetings and report on what is going on in the city. Many of those same people also voted for Jon Kaji, George Chen, and Aurelio Mattucci for city council.

This next admission from Smith-Enciso was also quite vindicating for me:

I reached out to local journalists and newspapers and no one wants to write about him after all the harassment he did of the woman who wrote the LA Times article on him.

It's amazing how these hateful liberals love playing victim, and they love labeling anyone who exposes them as "harassment." But I digress. What is really vindicating is that reporters in the South Bay and in the greater Los Angeles area have learned their lesson and do not defame or shame or attack or vilify me in the press. Strangely enough, though, there are a number of a local reporters in the Southern California News Group who have written respectful statements about me and others I work with.

This revelation from Smith-Enciso, that local press will not attack me, is proof that everyday people can fight back against the corporate media and win. For too long, press at the local, state, and even national level have gotten away with targeting and shaming ordinary people simply because of their politics or their differences of opinion on local or national issues. Now that the larger conglomerate of corporate media no longer has the power they used to, in large part because people can be their own press, they have learned not to systematically target and harass people.

I do think anyone who has endorsed him and has been endorsed by him is not a good fit for any position in local government. However I just don't know what else we can do besides continuing to talk about how dangerous he is and spreading the word.

This last sentence is also laugh-out-loud funny. How do they plan on spreading the word if they insist on making posts and sharing comments in a private group that one else can read? These "Torrance Community Group" haters have a long history of throwing people out of the Facebook group who disagree with them, too. Who are they going to talk to?

And what do they mean "dangerous"? I must say that liberalism, leftism, progressivism, whatever is truly a mental illness in and of itself. They really believe that speech is violence, and that words alone can kill. The truth is that they do not like the fact that someone in the community is calling out their crap, and that drives them crazy.

The fact that they want to continue talking and spreading the word (about what, exactly?) is another symptom of their Schaper Derangement Syndrome. It's quite sad, really. I hope they get help soon.