Well, that didn't take too long.

Today, (June 24th, 2022), members of the "Torrance Community Group" are already panicking because I have exposed their secretive hatefest (and very serious cases of "Schaper Derangement Syndrome") for the public to see. 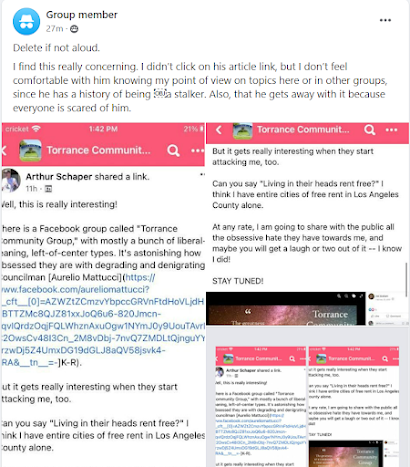 I don't whether to laugh or cry at this point. This small cadre of individuals are truly mentally ill, or emotionally immature, or both, or something far worse. 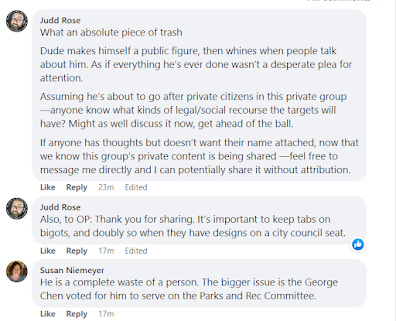 My  property of "free rent" just got bigger.
This Judd Rose guy comments, "Dude makes himself a public figure."
Funny how he and others can say that, when they have spent much of their time on social media making public comments about me and attack me. They are responsible for making me a public figure, really.
Susan Niemeyer, who promoted hate group "The Southern Poverty Law Center" when she was defaming some of the city councilmembers, says that I am "a complete waste of a person."
They why did she spend time attacking me in the first place? Wouldn't that make her a waste of a person, too? Or at least that she is wasting her time?
There is a price to "Schaper Derangement Syndrome," no doubt, and they are all paying the price. If they just went back to taking care of their own little lives and stopped defaming others who disagree with them, they would not have so much pain and suffering. It's their own fault, and yet one of the core problems with SDS is that they refuse to take responsibility for their thoughts, their feelings, their actions. It's really sad, but in some ways, it's quite funny to see so many people melt down just because I call them out for all the hateful, dishonest things that they write and do.