Here's another happy victory for Los Angeles County residents, even though there is so little to celebrate at this time.

After LAUSD School Board Member Ref Rodriguez was forced to step down for campaign finance violations, the seat opended up a multi-candidate free for all.

One of the candidates running to replace Ref Rodriguez?

This corrupta has no business serving anywhere or in any capacity on a governing board. She oversaw and approved the appointment of two illegal aliens to city commissions. She has been head-deep in local and LA County corruption for the last four years. She works with "Puppet-Master" Efrain Martinez, who presided over her swearing-in as the new mayor in 2016.

I could not stand the idea of her having any kind of chance of getting elected to the school board--of course, in the long run it doesn't matter who serves, since it's another liberal Democrat who will do more harm than good for the students.

Thankfully, Ortiz was shut out of the Top Two run-off, and the margin was oh so close!

Check out the report from MyNewsLA.com for more information:

Former teacher and mayoral aide Heather Repenning appears to have finished in second place Friday and secured a runoff slot for a vacant seat on the Los Angeles Unified School District Board of Education.

With 100 percent of the votes now reported to be counted, Repenning has 31 more votes than Huntington Park City Councilwoman Graciela “Grace” Ortiz. A second place finish means the right to enter the runoff with the top vote getter, former LAUSD board member Jackie Goldberg, who far outpaced the competition in the March 5 election with 48.17 percent of the vote, although a recount of the final results is possible. 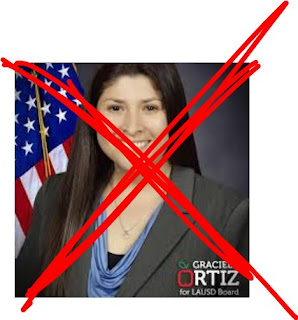 Goldberg dominated the 10-candidate field, but with less than 50 percent of the vote, she fell short of the majority needed to avoid a May 14 runoff election.

On election night, Ortiz originally emerged in second place with a 54-vote lead. But as county officials continued tallying mail-in, provisional and other ballots, Repenning jumped into second place late last week with a 133- vote lead over Ortiz.

Repenning, a former teacher and aide to Mayor Eric Garcetti, expressed confidence Tuesday that she would make the runoff election, despite her narrow lead.

“In case there was any question how much every vote counts, we just received the most recent update on last Tuesday’s election results,” she wrote on Twitter. “We are on pace to make the runoff by a margin of just 35 votes — with fewer than 100 ballots left to count. These results show how critical every last vote is, and how important your support has been.”

So much for ballot harvesting and public corruption getting the La Raza faction back onto the School Board.

This is a welcome victory! I can breathe one more sigh of relief!