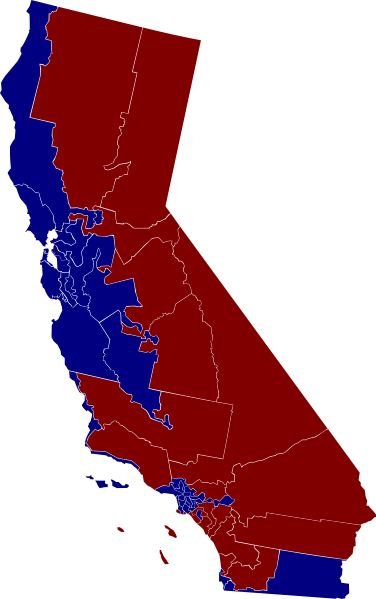 After the primary, I was feeling primarily discouraged.

Torrance elections did not go the way I had hoped. A pensioner (Rizzo), a progressive (Goodrich, two status quo political appointees (Ashcraft and Weideman), and a union puppet (Furey) won the election. Torrance voters, all 13% of them, chose the same ol' same ol', but the city's infrastructure issues and pension concerns will not be resolved with the same "we saved a little here and there" mantra offered by the incumbents.

Donnelly lost to Kashkari. Ouch! Such hopes, dashed. I feared that Kashkari might drag down the ticket. Then again, the governor's race might get such little press in the first place, that it won't matter. Kashkari wants ten debates with Governor Jerry Brown. Yawn. They agree on almost everything (aside from the billion dollar bullet train boondoggle, the water issues, and schools). They both voted for Obama, pro-abortion, pro-gay marriage, pro-Cap and Trade, pro-Amnesty. Not much of a choice.

Indeed, David Hadley won a slim majority against Al Muratsuchi in the 66th Assembly District (interestingly enough, by sixty-six votes!). That's a step in the right direction. Two other Democratic State Assembly incumbents (Sharon Quirk-Silva and Steve Fox) lost to Republican challengers by six to ten points. Rudy Salas in the AD-32 will face a steep challenge, as a majority of voters selected a Republican candidate against him. The Democrats will lose their state Assembly supermajority in November.

As for Congress, GOP Buck McKeon's House Seat (CD-25) will remain in GOP hands, with the fight brewing between Ted Knight and Tony Strickland. Democrat Julie Brownley of Ventura (CD-26) got less of the vote compared to two Republicans contesting the seat. She will face a tough race to keep her seat, too. Ms. Lois Capps of Santa Barbara (CD-24) is in trouble, too, since the GOP turnout beats her and the other Dems. She will have to fight once again to keep her seat this year, too. Another swing Congressional District, CD-52, is looking more likely than ever to fall into GOP hands once again.

GOP gang prosecutor Elan Carr's Top Spot upset in the 33rd has piqued the interest of partisan hopefuls. Can Carr drive off with some of Democrat Wendy Greuel's vote while capitalizing on voter discontent with the Sacramento criminal enterprise: i.e. the Democrat's state senate supermajority? Anything is possible, but with the hits and misses of this primary election, realistic and optimistic must balance for November.

Looking over statewide and district races, conservatives did pretty well, and the California Republican Party is poised for a comeback.

On another, more disturbing note, indicted state senator Leland Yee (San Francisco) was planning on running for Secretary of State, until he was indicted for bribery, corruption, and gun-running. He has been suspended from the state senate, and he officially withdrew form the Sec. of State race, but not in time to removed from the ballot. He garnered 9% of the vote. "Uninformed" does not begin to describe the average California voter if an indicted state senator can still get 300,000 votes for a statewide office.

What is going on, California?
Posted by Arthur Christopher Schaper at 8:51 PM