Pam Queen is the Managing Propagandist pretending to be an editor at the Dominion Post, a failing newspaper based in Morgantown, West Virginia. The paper is doing so badly, that they only issue a print edition three times a week. 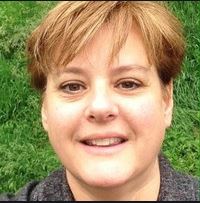 They also spend most of their time trolling over the social media accounts of local residents, trying to find ways to shame and dishonor people who have conservative viewpoints.

I wrote them some very heated emails because they were targeted Ms. Cindy Frich of Morgantown. She is an activist with MassResistance who has helped us take on Drag Queen Story Hour programs and stand up to the perverse LGBT agenda that is targeting children.

Instead of acknowledging the fact that she and her failing newspaper were targeting a conservative just to shame her for her strong stance on pro-family views, she wrote a bloated justification.

We initially chose to remain silent as your calls and emails have been rude and threatening. This one is a little calmer so I will address your points, but then our conversation will end.

3.       Anyone can share views on Facebook, but Facebook is a public forum and Cindy, despite her arguments to the contrary, is a public person. She has represented Monongalia County in state government and continues to seek a seat in the Legislature, as recently as the most recent election. Just because she lost does not mean she is no longer a public figure.

4.       We are not demonizing anyone and no one said Cindy was a demon or even a bad person. We gave her every opportunity to explain her post and why she thought it important to share publically and then we published verbatim her response.

5.       We have never been told of threats against Cindy locally, nationally and internationally, until now. She never contacted us to ask about doing a story and we never saw a police report on it. We have a reporter who goes to law enforcement agencies and talks to officers, deputies and troopers regularly. Never a mention. If Cindy says she contacted us or filed a police report, I’d like to know who she spoke with.

6.       We don’t troll Facebook posts, though social media has made using those sites part of our jobs. We have readers who share things they see with us on  a daily basis.

Wow! It's crystal clear that we got under their skin! Can you imagine a newspaper in West Virginia, a newspaper which claims to have some kind of reputation deciding to respond to the blog posts of an activist based in ... California?!

This is quite a victory for MassResistance! And this is a big victory for Cindy Frich, too. They wanted to shame and defame her. Instead, they fell right into our trap and started writing about MassResistance, and they were forced to share everything that I had written about them--for the reading public to see! Of course, we have to assume that there is still a reading public in Morgantown that cares about what they have to share.

After the comments that I had shared via email with the local paper, I wrote the following blog to expose their complete lack of professionalism and integrity. Click here.

Clearly, the Dominion Post propagandists were very unhappy that I exposed them, and they decided to write an entire article about how I exposed them!

Here are the newspaper clippings: 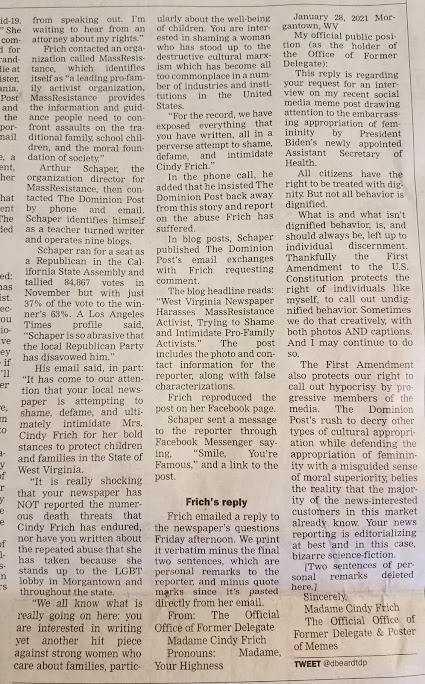 You'll notice that the majority of this massive article (pretty large for a report on a meme post, don't you think?) is about what I wrote and how I exposed the Dominion Post for targeting Cindy Frich. They even reported on the fact that I sent them a text message via Facebook! Talk about petty (for them). Again, can anyone imagine a newspaper which claims to have some degree of professionalism writing an article about Facebook posts and text messages? Really?

Of course, I responded to the above letter from Pam Queen with the following below:

You felt "threatened". Really? It's called "exposure", and you just don't like the fact that you got busted.

David clearly wanted to write a hit piece against Cindy Frich, and you failed because we exposed you. Thanks for mentioning all the comments that I wrote to you, too.

Please make sure to include the link to the blog next time you write a story about what I wrote:

You have a responsibility to clearly cite your sources. The name of my blog is "The State of the Union." You failed to do that. I work for the international pro-family group MassResistance. Their website is www.massresistance.org. You failed to mention that, too. Such a lack of professionalism is really unbecoming for so-called journalists and editors

Thank you for the free publicity for MassResistance, by the way. We have quite a record fighting against the corrupt, destructive LGBT agenda, including their push to normalize these destructive behaviors onto children.

Working with Cindy Frich, we shut down the Drag Queen Story Hour program at the Morgantown Library in 2019:

We revealed to the public that this so-called "role model" had been convicted of theft in Maryland. For some reason, your newspaper did not even BOTHER to report on any of this. Why is that? Probably because you were too busy looking at people memes on Facebook. In fact, it is a bold-faced lie in your email below that you do not troll Facebook pages. That is precisely what you did when you were looking over Ms. Frich's social media to find occasion to write a hit piece against her.

Instead, you attempted to attack me. Mission Accomplished!

Oh, and MassResistance also exposed the truth about a man pretending to be a woman named DeeDee McIntosh, who was pushing for an LGBT non-discrimination ordinance on the Star City City Council. McIntosh is also a sex offender:

Again, isn't it your job as a newspaper to report facts? Isn't Star City within the jurisdiction of your reporting agency? How could you possibly have not known that DeeDee McIntosh had molested other children when he was a teacher in the Monongalia County schools? Why did you insist on ignoring this fact when he was in the Star City City Council multiple times last year, trying to push this so-called non-discrimination ordinance, an ordinance which would have allowed confused men like him--with a record of molesting girls--to go into women's restrooms in Star City?!

These stories that MassResistance covered are all notably, newsworthy issues in the Monongalia County region--and you did not bother to report on them. It's almost as though you were covering for those very creepy, disturbed people. Are you OK with sex offenders being around children? Do you really think that confused men dressed up as garish parodies of women should be around children, and groom them?

Cindy Frich does not believe that children should be groomed by sexual predators. Cindy Frich is fighting for faith, family, and freedom, and she was grateful for the support and guidance she received from MassResistance to fight back against this perverse, destructive LGBT agenda assaulting our children and the public good.

Instead of reporting on the events and issues that MassResistance has covered, you waste time looking for Facebook posts to report on. Really. What a shame. You deserve to be exposed.

Posted by Arthur Christopher Schaper at 9:26 AM