Alexandria Ocasio Cortez is back in the news, again ... 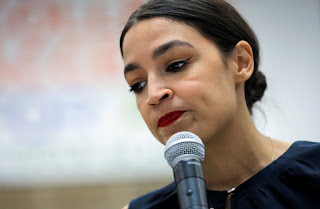 This time, she is playing victim all while claiming to champion the Little Guy against Wall Street. But is she really a champion for the little guy?

Sure, she worked as a bartender, then got elected to Congress, unseating an out-of-touch incumbent who had been representing the Bronx for a number of years.

But she had an idyllic childhood, growing up in Westchester, more up in upstate New York, going to elite schools--and she got an expensive college education, too.

But ... she has made some statements going after Big Tech and Big Business, right? She even waded into the controversy over the GameStop-Reddit-Robinhood Short Sell fiasco.

Her was her first tweet to confront this problem of Wall Street stickin into the individual investors all while to game the rules for themselves:

We now need to know more about @RobinhoodApp’s decision to block retail investors from purchasing stock while hedge funds are freely able to trade the stock as they see fit.

As a member of the Financial Services Cmte, I’d support a hearing if necessary. https://t.co/4Qyrolgzyt

Then, when US Senator Ted Cruz indicated his full agreement with her, and his interest in doing something about it, she lied about him and pushed him off:

I am happy to work with Republicans on this issue where there’s common ground, but you almost had me murdered 3 weeks ago so you can sit this one out.

Happy to work w/ almost any other GOP that aren’t trying to get me killed.

In the meantime if you want to help, you can resign. https://t.co/4mVREbaqqm

She really felt threatened by US Senator Ted Cruz? She actually believes that he tried to have her killed a few weeks ago? How many more videos do people need to see before more people start to realize that this was a coordinated effort? Why else would the US Capitol police have done so little, going so far as to escort individuals onto the floor of the US Senate? Don't believe me? Here's the video.

Clearly,  AOC is a brazen liar, a total sham and shame artist trying to knock Republicans.

AOC is backing away from taking on Robinhood because she does not want to get killed by Republicans?

Is that what is really going on here?

Well, perhaps not. Check out what "Mr. Wonderful" Kevin O'Leary found out about AOC a few days ago:

This proves it. Inside of every socialist there is a capitalist screaming to get out! @AOC #Fashionista pic.twitter.com/Tv3csr0jDu

As one of the stars of the ABC reality TV show "Shark Tank", Kevin O'Leary is honest about his interest in making money. Capitalism is good. Free markets are good. Getting rich is good, and he is very honest, very up front about his interests, his demands. He does not shy away from pointing out that business and competition are a ruthless business, and not for the faint of heart.

At least he's consistent. In fact, he ran for leadership of the Canadian Conservative Party some years ago, hoping to push for a profound resurgence of fiscal discipline and international busisness competitive strength for Canada.

And, in brutal yet entertaining fashion, he bashes Alexandria Ocasio Cortez in his Twitter video about. For all her protestations about being a big-time socialist who wants to push equity and equality for everyone, she is all about making money. She is all about raking in the dough for herself by selling merch. WHAT A HYPOCRITE!

She wants to "Eat the Rich", but only so that she can become rich herself. She has no interest in taking on Wall Street. She gets rich off of making big sales and big deals. She has a brand, and she is ... wait for it ... capitalizing on it! She probably learned everything she knows from President Donald Trump, the expert at making money off a brand name, especially when you don't have anything else to profit from.

AOC is a corporate shill, a vulture capitalist sell-out. She plays herself up as some kind of champion for the Little Guy, for the 99% that has been screwed over by Wall Street--Washington DC collusion.

The truth is that she gets rich, and she wants to stay rich by exploiting working class anger against other rich people who are not herself.

She has no interest in doing anything about Robinhood or the rigged rule changes and insider trading on Wall Street. She's a sappy, insipid champagne socialist, one of the very rich who are getting richer, while everyone else gets poorer and poorer because of abusive government overreach.

AOC is a vulture capitalist fraud, simple as that. She profits off of people's angst and outrage, telling them to hate "the rich", but at the same time she makes big money off the very people she claims to champion, making them so much poorer in the process.

In other words, she's a reverse Robin Hood: she robs the poor to feed the rich, i.e. herself. 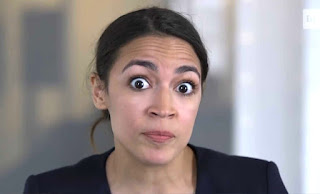