In previous posts, I have reported that the so-called pro-democracy movement has some very anti-democratic elements with it.

First, I pointed out that Joshua Wong, the self-described youth leader assisting with the democracy movement, has admitted to some very socialistic thinking and positions. He believes that capitalist hegemony must be confronted, whatever that means.

He is also militant pro-homosexual and transgender. He supporters the Sexual Orientation (Anti-)Discrimination Ordinances, which would grant so-called rights (in reality, more privileges and pre-eminence) to homosexuals and transgenders in the Special Administrative Region.

If anyone has been paying attention to the widespread consequences of the LGBT movement around the world, they know that the LGBT juggernaut brings in its wake more government control and statist sanction, i.e. more tyranny, not less. How many free-thinking individuals in Hong Kong will face persecution, fines, even imprisonment for speaking out against homosexuality and transgenderism?

These behaviors are inherently destructive and deviant, they post untold costs on the public, they undermine human capital, and the harm the political, cultural, and moral legacies of any country.

Why would pro-democracy activists want to undermine the natural rights they seek to enhance?

And of course, there's Jimmy Sham, the militant LGBT activist who has gone to every length to connect the push for democratic governance in Hong Kong with the greater push to normalize and promote the LGBT agenda.

And now look at the strange(r) bedfollows (no pun intended) that Mr. Sham is keeping:
The young man in the featured photo above on the right is Jimmy Sham.

On the left, you can see that the other man is wearing a shirt sporting the headshot of bloodthirsty Communist Ernesto "Che" Guevara. 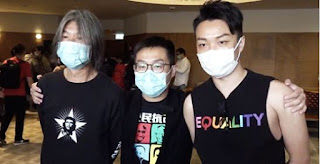 Why would any pro-democracy activist dare to promote Che Guevara?!

Che Guevara was a pampered, middle-class Argentinian brat who went full commie to make something of himself. He was responsible for unprecedented blooshed and mayhem against freedom-fighters around the world. He was pro-China, pro-Beijing, pro-tyranny.

Don't believe me? Check out this photo: 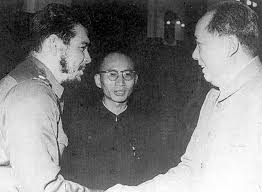 He lived off the work of others, doing nothing for others in return.

He was ultimately executed by firing squard, begging for his life, pleading with them that he was worth more to his "capitalist" captors alive. He was ready to sell out the Communist dream he had fought for for years just to keep himself alive and well.

Che Guevara was certainly no democrat! A ruthless autocrat who imposed the religion of materialist envy and strife on the impoverished island nation of Cuba, Guevara should not be celebrated in any fashion. 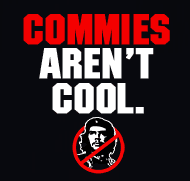 Aren't these Hong Kong activists supposed to be against The Communist Party of China? Aren't they supposed to oppose any promotion of Communism? This a sickening display of strange bedfollows, indeed.

The Hong Kong pro-democracy movement is pro-gay and now pro-CHE!

People of Hong Kong need to wake up! They need to promote liberty and constitutional rule, meaning that the natural rights of all are protected from both the majority as well as the tyranny of the minority. Democratic governance is nothing more than mob rule when there are no strictures in place to protect the rights of all citizens, nor to ensure that constitutional rule is in place to protect those rights and limit the role of the government.

What we are witnessing in Hong Kong, sadly, is a promotion of demagoguery under the guise of anti-Beijing rebellion. Why rebel against one Communist regime, only to usher in another one?