Unintelligent: US Intelligence Director Threatens to Cut Off Countries Which Ban Sexual Perversion

What kind of backward, selfish thinking is this? Our leaders in Washington DC need to put the needs of American citizens and the greater American public first. Such chauvinist pronouncement only hurt this country.

Nations have every right to decide how they wish to govern the affairs of their country. They have every right to protect the domestic affairs and health of their people. For those who are accommodationist toward the whole homosexuality movement and the LGBT agenda, this article should serve as as clear warning that homosexualists want to take every step to normalize their behaviors, and they are more than willing to risk the health and safety of others to do so, even on an international scale!

U.S. may cut intelligence sharing with countries that ban homosexuality

This is shameful, selfish, and just plain disgusting. A very unintelligent move.

Why it matters: About 69 countries still criminalize homosexuality — including key U.S. intelligence partners like Egypt, Saudi Arabia and Kenya, per the Times. Grenell is the first openly gay Cabinet member and has prioritized anti-discrimination policies.

There is nothing wrong with discriminating against bad, destructive behaviors. This Marxist mindset is permeating every level of government, and it must be confronted and removed at all costs. There is good and evil, there is healthy and unhealthy, there is right and wrong. Discrimination is essential to our being, to the very fabric of any culture or country.

Even male and female are clear examples of discrimination, and they should be upheld and prized, not damaged and diminished.

"We can’t just simply make the moral argument and expect others to respond in kind because telling others that it’s the right thing to do doesn’t always work. ... [T]o fight for decriminalization is to fight for basic human rights," Grenell told the Times in an interview.
The state of play: Grenell told the Times he has "the president’s total support" and that anti-discrimination "is an American value, and this is United States policy." But Grenell has not made clear if the plan is to withhold additional cooperation or instead draw back on current intelligence sharing levels.

Homosexuality is not a human right. It's an unnatural, human wrong. Homosexual conduct should be discouraged at all costs. "Anti-discrimination" is an American value, Grenell claims, but to oppose what kind of discrimination? Discrimination based on skin color is invidious and villainous. No one should be judged less or more based on the amount of melanin in their skin. It's nonsensical to accommodate such folly.

But behaviors should be the target of discrimination, when they are harmful, destructive, aberrant, and seditious. 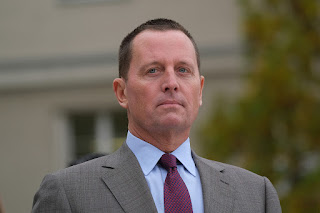 Grenell has also suggested that foreign aid could be effective leverage to push countries toward decriminalizing homosexuality, according to Hadi Damien, founder of Lebanon’s Beirut Pride group, who participated in discussions with Grenell when he served as ambassador to Germany.

Why is the United States giving out so much foreign aid to begin with? Countries which criminalize homosexuality should not be afraid to tell the United States State Department that they will not bought. Protecting the health and well-being of one's nation and community is of utmost importance.

Between the lines: Since he only serves in an acting capacity, Grenell's appointment is set to end in September. But he says he intends to make the most of his time, telling the Times: "The president asked me to do a job and I am going to do the job to the best of my ability."

Mr. Grenell needs to be retired immediately. This appointment by President Trump was one of his worst, I admit. Grenell is not interested in promoting or exporting American values, but rather he is determined to normalize sexual perversion. What's worse, he calls himself an "imperfect follower of Christ." 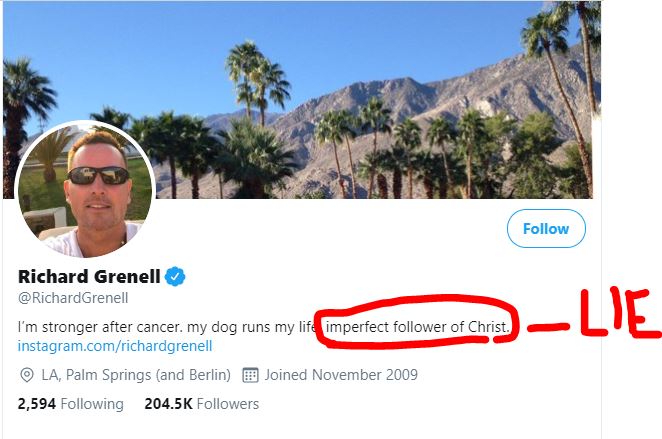 No one can claim to be a follower of Christ will engaging in unseemly, sexual behaviors and calling such conduct a lifestyle. There is no support for such perverse, errorenous thinking anywhere in Scripture. Putting aside religious arguments, homosexual conduct spreads disease, undermines the mental health and well-being of individuals.

Most so-called Third World nations are entering into Second and even First World status because they are fighting to protect natural marriage and the family. Their economic growth is developing in turn, and no one should despise them for protecting their citizens from unnatural acts.

Shame on Ric Grenell for promoting his self-serving perverse agenda. It's time for all dedicated Americans and pro-family contenders to push back on this degrading push to normalize what is wrong and inherently destructive. How self-serving has this agenda become, that federal officials are willing to compromise the safety, sanctity, and security of our overseas partners!